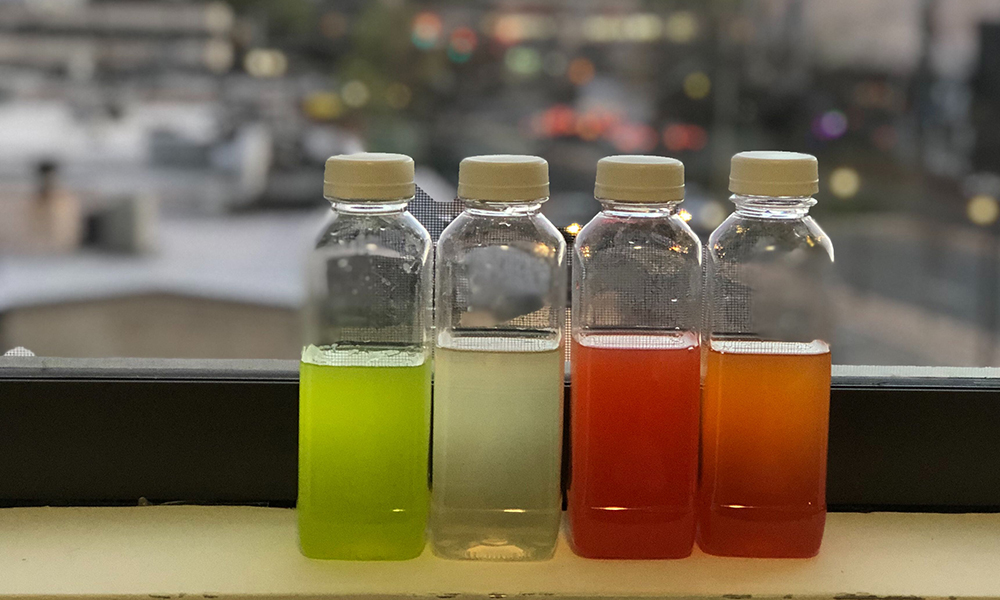 It’s 4:30 on a Friday afternoon. The vibes are high, the sun is shining, you can smell spring in the air. The line for Cornerstone wraps around Knox Road, kicking off the weekend. It’s time for happy hour.

If this got your mouth watering and craving the cheapest drinks you’ll ever get, I feel you. So, with that, let me try to help you out. I tried four of Cornerstone’s takeout cocktails on Friday, in honor of the happy hours we’ve lost to the quarantine. Here’s what I thought.

Right off the bat, I was taken aback by how wasteful the whole operation was. The takeout drinks are served in unmarked plastic bottles that seem to each have been covered in individual plastic wrap. But then again, I’m quite possibly the only person who’s actually ordering drinks from my local bar instead of buying a handle of vodka and mixing it with the Gatorade that’s been sitting in my fridge for the past two weeks.

As I watched the bartender pour each drink, it looked like there was less alcohol in these than what would have been in a drink made in the haze and rush of a normal happy hour. Like, come on! How much alcohol are you really selling right now? There’s no reason not to pour me up!

[Read more: All the baking I’m doing to keep myself sane during quarantine season]

Just by looking at this drink, I could understand the name. It’s nuclear green, made with Tanqueray gin, melon, lemonade, tonic, lime juice and a splash of orange juice. This was the first drink I tried and as I sniffed the bottle I was hit with the melon. I thought to myself, “How bad could it be?” As I took the first swig, I quickly answered that question.

Not only had I just gulped a plethora of throat-scorching components, but the drink was warm! After adding ice, a straw and mixing it around, it was actually weirdly good. I couldn’t taste any of the alcohol, which is a plus (but also a negative?). But as I kept sipping on it, the sugary lemonade coated the back of my throat, and the strong lime aftertaste became too much. I could imagine myself ordering this one more time to freak out my friends and then never, ever again.

I was most excited for this Cornerstone classic. Out of all four drinks, it was the only one I’d ever heard of before, and I knew it’d be the shining star of my review, so I had to order it. I delightfully took a slurp from my straw and it was, in a word, disgusting.

I physically gagged, hopping to exorcise the beverage from my insides. The main flavor was peach, but the aftertaste seemed like pure rubbing alcohol. I was sure that I’d find the infamous Zelko somewhere in the recipe, but this drink just called for Stoli peach, Stoli orange, Stoli razz, pineapple, orange juice and a splash of grenadine.

[Read more: Five hip-hop producers you should get to know]

This was easily the best drink I’ve been served in my nearly four years at the University of Maryland. Containing Malibu, Bacardi, Captain Morgan, pineapple, ginger ale and a dash of grenadine, this was like sipping juice out of a coconut shell. The Malibu was definitely the overwhelming flavor, but not in a way that made me shudder at the thought of coconut rum. Independent of all the alcohol in it, it tasted good.

I drank this the rest of the night, forgetting there was actually alcohol in it and got pretty tipsy. Let’s just say dinner tasted better than ever as I munched on my fried rice. I would throw this into the shuffle of my regular drink orders, even though it’s more expensive than what I’d normally spend at a happy hour.

By the time I got to this one, I have to be honest, I was no longer near tipsy. I smelled this and reeled backward. I took the first sip, and like the Stoli Punch, immediately gagged.

Luckily for me, this story has a nice ending. Once I overcame the overpowering taste of double liqueur, I couldn’t stop drinking it. I happily watched television, sipping my sweet lemonade as if it was actually the happiest hour of my life. This was the ugly duckling that turned into a beautiful swan.

On the whole, I would never do this again. I spent $30 to drink weirdly intricate cocktails in my apartment. But, for the sake of supporting my favorite local business, and because there is literally nothing better to be doing, it had to be done.