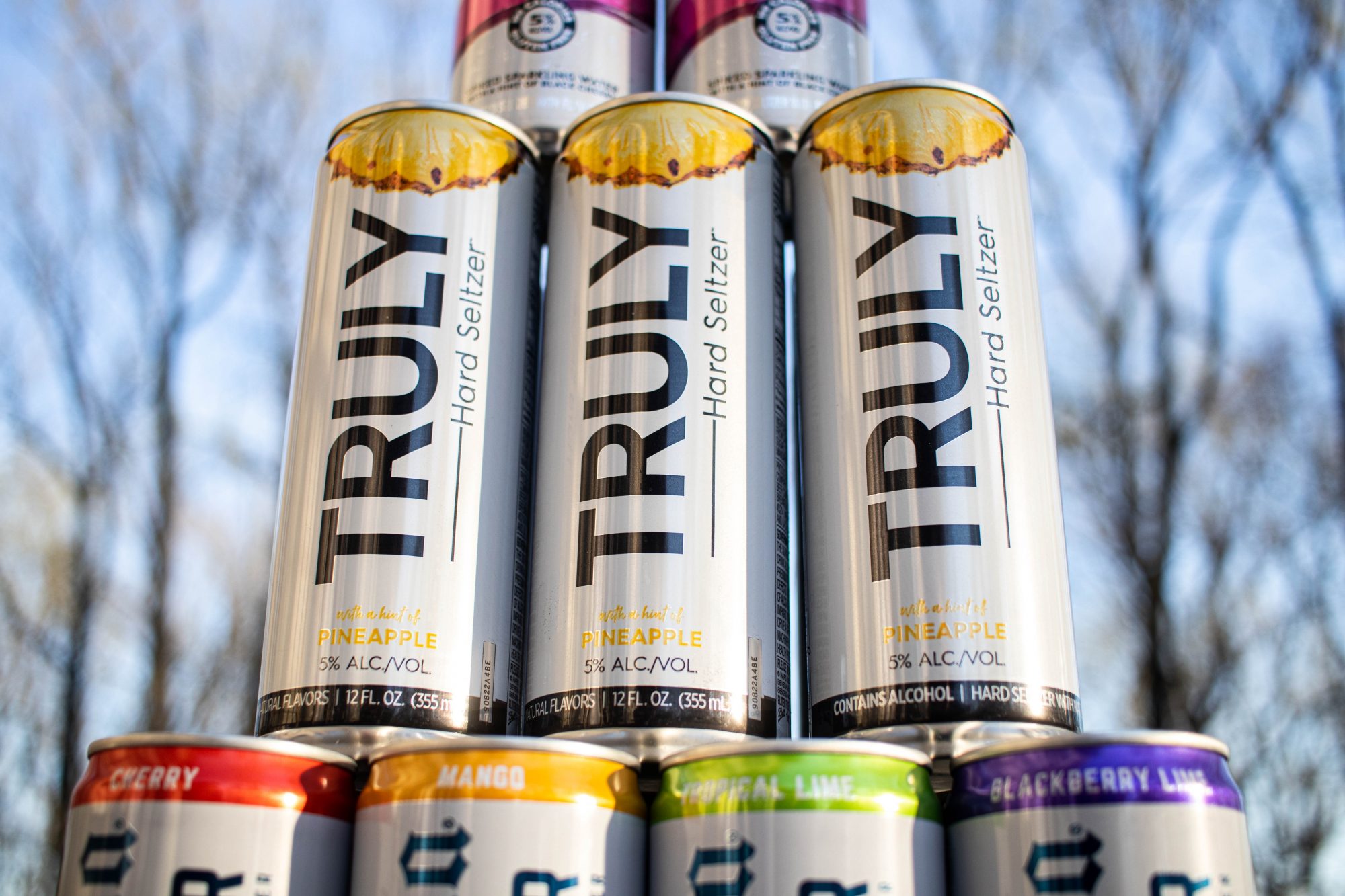 As the weather gets warmer, spiked seltzers are a great way to cool off. (Julia Nikhinson/The Diamondback)

A wise man named Trevor Wallace once said, “ain’t no laws when you’re drinking Claws.” But what about the other hard seltzers on the market? Given the extra time at home we have on our hands, some of us at The Diamondback have reviewed an array of spiked seltzers. Some brands may sound familiar — and some you may be curious about. Before we dive in, remember to drink (and quarantine) responsibly.

Truly Hard Seltzer is like White Claw’s underrated, hipster sibling. The two brands are almost identical — 5 percent alcohol by volume, 12 ounces, 100 calories, 2 grams of carbs — except I don’t feel embarrassed to buy Truly. I feel like I can walk up to the cashier without the fear of exposing myself as a frat-going, lightweight college girl. It’s not true, but I can pretend!

And, actually, I think they taste better. While neither brand tastes like alcohol (like, at all), Truly tastes a lot less like seltzer. As someone who really hates seltzer (don’t ask me why I keep drinking hard seltzer, I have no answer), I welcome the focus on the fruit flavor over the carbonic acid.

With three variety mix packs — berry, citrus and tropical — and one rosé, Truly also has a larger selection of flavors than White Claw, so there’s more opportunity to spice up your darty. Not to mention, Truly’s tropical mix pack is unmatched. Mango? The epitome of bliss. Pineapple? Poolside at a Caribbean resort. Watermelon & Kiwi? Adult Capri Sun vibes. Passion fruit? Chef’s kiss.

White Claws take me back to summertime. There’s nothing like sipping one of these poolside. If we weren’t in a pandemic, I’d prefer to down four of these in two hours at an IFC tailgate. With only 5 percent ABV in a 12-ounce can, you can afford to do that. In a variety pack with four flavors including lime, raspberry and grapefruit, the black cherry stands out above the rest. You’d think it’d be grossly sugary, but the taste remains light and matches perfectly with the fizz of the seltzer. It’s the only flavor that doesn’t get too sticky sweet in the back of your throat. I give it my highest recommendation.

[Read more: This Week in Number Ones: The Weeknd ends Roddy Ricch’s reign]

I never thought of myself as the type to drink a Four Loko at 2 p.m., but that’s quarantine, baby. To me, spiked seltzers should have a distinct “LaCroix” quality to them, only tasting faintly of their respective flavors. A regular Four Loko smacks you with an artificial sweetness that makes you second guess the ingredients you’re pouring down your throat.

Unfortunately, the brand’s take on hard seltzer didn’t hold back with the flavor, either. They offer two options — black cherry and mango. Ideally I would’ve gone with the latter, but the stores around me only carried black cherry.

Just one sip and I was instantly reminded of the nauseating cherry-flavored medicine I took growing up. I think the main appeal to this seltzer is its 12 percent ABV. Why drink two of the other spiked seltzers when you can guzzle down 23.5 fluid ounces of carbonated Four Loko? I can only imagine myself drinking this as an underclassman who hasn’t learned the true destruction that can come from this tall, camouflaged can.

Despite controversy over their “Coming Ashore Soon” ad and halted beer manufacturing, Corona is continuing to push the release of its new hard seltzer in these dire times. At $15.99 for a 12-pack with 4.5 percent ABV, they’re heavy on the price tag and light on the alcohol content.

Corona Hard Seltzer (as seen on the packaging) comes in 12-can variety packs with four flavors: Tropical Lime, Blackberry Lime, Mango and Cherry. The assortment of flavors, a great marketing tactic for first-time buyers, encouraged me to try them all in one go — emphasis on “try.” Please sip responsibly.

Blackberry Lime took the gold medal in this race. That extra heaping of blackberry sweetness on top of the light, fresh lime combined for one of my favorite seltzer-sipping experiences yet.

Tropical Lime earned second place. It is reminiscent of a lime wedge-topped Corona beer, a sharp citrus kick with a mellow aftertaste. Although quite smooth, the richness mildly lacked. Mango came in third. Mango is a rather difficult artificial flavor to pin down, but it still went down fairly easy. Cherry came firmly in dead last. I’m partial against artificially flavored cherry, so this flavor was not for me. Overall, I would certainly recommend picking up a pack for good flavor and summer nostalgia.

For just a moment — maybe a fraction of a second — the strawberry Bud Light seltzer I was sipping tasted exactly like, well, a Bud Light. That is, before I was bombarded by a rush of syrupy sweet. I’m not sure why I didn’t see it coming, but I expected the first taste to register would be the flavor of soda or seltzer, rather than beer. I also sampled the lemon lime, which tasted oddly like a margarita poured into a mostly empty beer can. Both flavors were too sweet for me, and seeing as the seltzers have the same ABV as a Bud Light — 5 percent — I’d rather have had a beer in my hand. At Total Wine & More, a 12-beer variety pack, which also includes mango and black cherry seltzers, goes for $14.99, meaning they clock in at about $1.25 per can when bought in bulk. The slender 12-ounce cans are 100 calories each, just a bit less than a normal Bud Light. But I’ll probably be reaching for something else at the beach this summer (if I can leave the house), since I found Bud Light’s seltzer attempt confusing and aggressively sweet.

The coronavirus may have emptied Cornerstone of much of its patrons, but not of its sweet bounty of Natural Light Seltzer. I was able to purchase five cans of seltzer for this article; four of Catalina Lime Mixer, and one of Aloha Beaches. That was all they had. I topped off the six-pack with a single Heineken.

At 6 percent ABV over 12 fluid ounces, Natty Light Seltzer clocks out as boozier than its contemporaries; White Claw, Truly and Bud Light seltzers are 5 percent ABV, for example. That scares me, because both flavors tasted more like a LaCroix than anything alcoholic. I enjoyed the Aloha Beaches — a delightful union of mango and peaches (ha ha, get it?) — more than the Catalina Lime Mixer, which was cherry and lime. I don’t like cherry flavor in general, though, so if that’s your thing, head to your nearest empty bar and show them some love by purchasing some of their seltzer; quantity may vary.