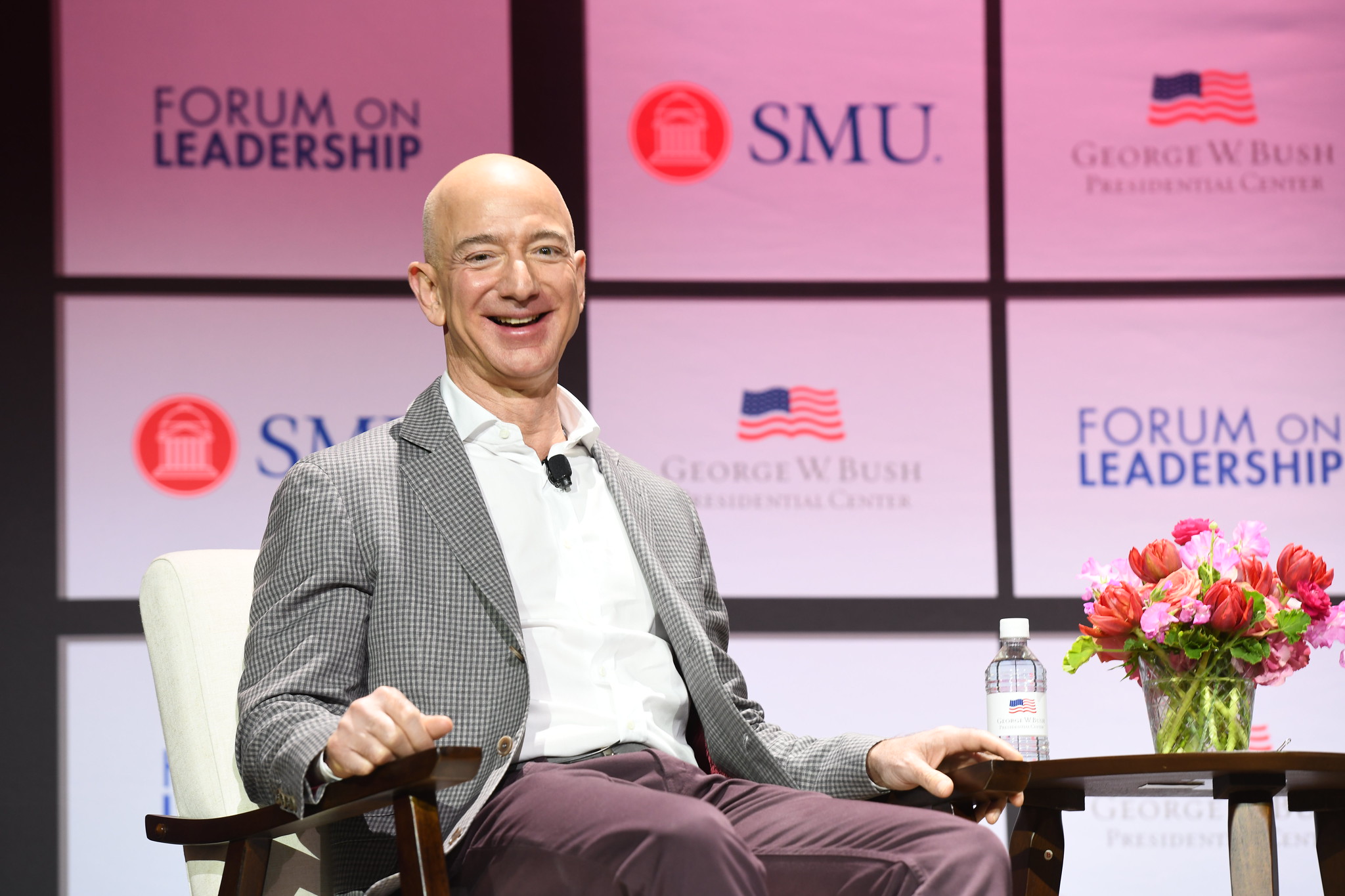 Jeff Bezos, the founder and CEO of Amazon. (Photo by Grant Miller for the George W. Bush Presidential Center)

In the clusterfuck that is watching powerful people’s economic interests play out in real time alongside a global pandemic that has no regard for The Great Line, a vicious Twitter cycle has emerged.

Every time a public figure worth many millions (or billions) decides to make a donation to help the masses combat COVID-19, there are two guaranteed reactions:

Person 1: If we do the math, the proportion of this person donating this much money in comparison to their total wealth is like a normal person donating a few dollars. They should do more.

Person 2: Oh yeah? And how much have YOU donated?

Now, some may question why person number 2 — who is likely NOT a billionaire, and not positioned to do well economically in these next few months — might jump to the defense of a figure like, say, Jeff Bezos, the literal richest man in the world. He asked the public to donate to a relief fund for overworked Amazon employees instead of just, I don’t know, paying them more money or something. Some may just respond with tweets like this:

– The person that haven’t donated a Penny

And you know what? I agree with them. Here are my top three reasons why:

Oh, Mr. Bezos. I get lost in those deep brown irises and then wonder what goes through his mind when he donates $100 million to food banks, but still thinks it’s fine to just force Amazon warehouse employees to work during a public health crisis without widely-accessible paid leave for the employees who have gotten sick — and will continue to —  as they dutifully risk their lives and well-being to ship sex toys to people across the nation. He is so handsome to me, in the way that he has so much money, and maybe one day he will read this and acknowledge that I am defending him, and then maybe he will notice me and give me some of the money which he has so much of.

You see that number, but it can be hard to comprehend. Seeing it written out almost makes it seem abstract, and I think in some ways it kind of is.

When do zeroes begin to lose meaning? How many lives had to be mercilessly exploited and human rights squandered to conjure up such an obscene figure? What is the human cost behind one individual holding this much capital, and in turn, this much potential influence over how the world develops? But more importantly: isn’t that just such a boss move? He’s like a girlboss but the boy version. He’s built a company from the ground up through hard work and determination, all by himself — now he has so much money he could buy like, 80 yachts. Jeff, if you’re reading this, I want to learn how you did it and also could I have one of the yachts?

3.His spending habits are his business

According to Business Insider, the average American spending one dollar is the equivalent of Jeff spending about $1.3 million. Did you know that a nurse in New Jersey was recently suspended for raising more than $12,000 on GoFundMe for PPE for herself and her staff because they lacked the resources to protect themselves otherwise? Then, do you think about how many lives he could save by just deciding to give a little more — say, one of his $122 billion — to healthcare workers who are dropping dead without access to face masks, gloves and sanitation materials? I know it’s kind of a crazy ask, and at the end of the day, the shortcomings of our ludicrously unprepared federal response to this whole thing is not solely his responsibility. But I don’t know.. Part of me is like … Hmm … Maybe he could try to make things better if it doesn’t affect him in the slightest? But what do I know! I’m just a dumb little asthmatic college girl afraid to leave her house.

In conclusion, we need to STOP bullying people with lots of money into helping others because bullying is WRONG and if we somehow overthrow them and redistribute their wealth then there is NO chance that Jeff Bezos will read this article and respond to my requests to please buy me a Nintendo Switch because all of the ones on Amazon are really expensive.