Maryland football’s Pro Day was canceled. Here’s how its NFL hopefuls are making do 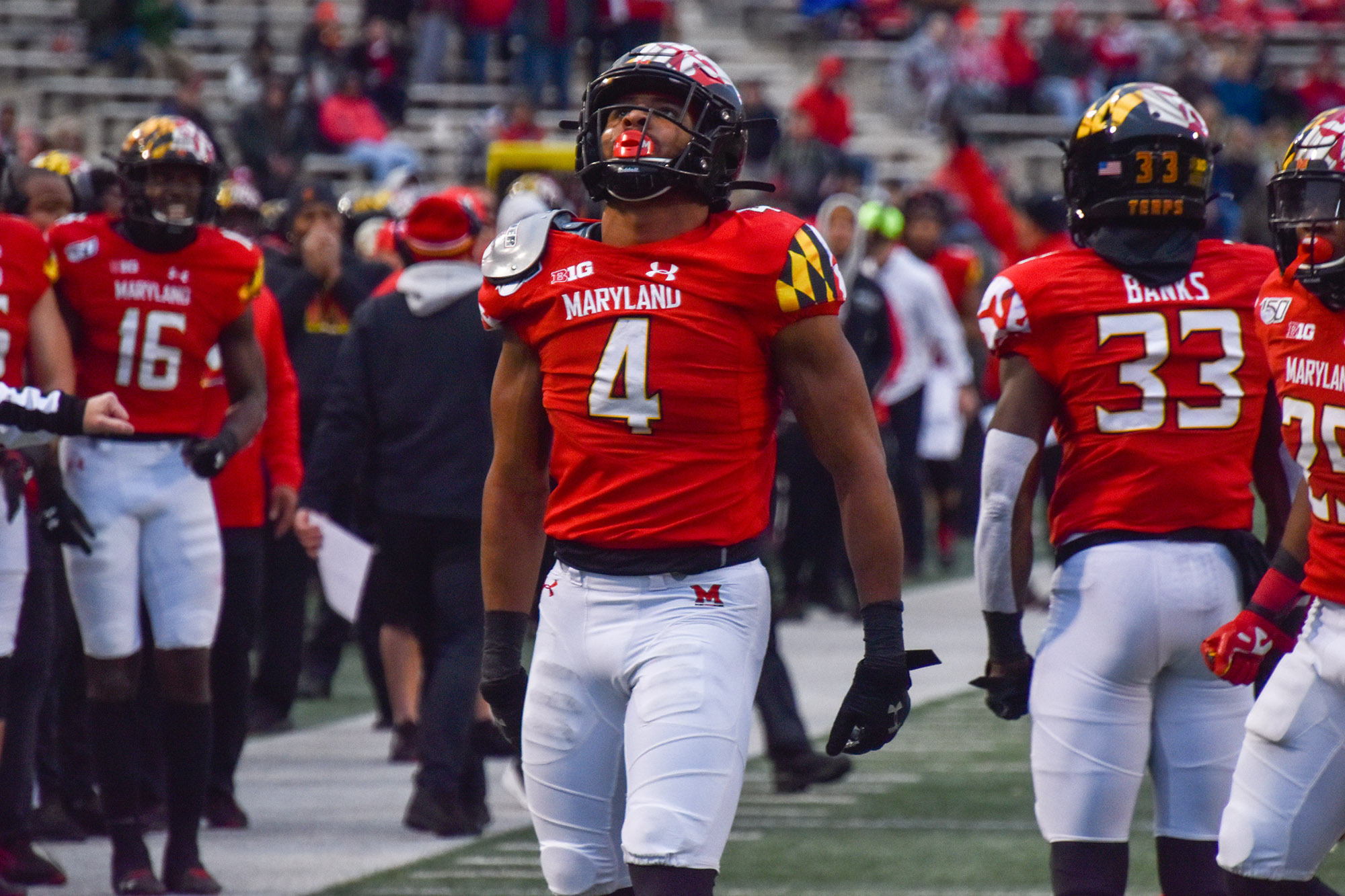 Keandre Jones doesn’t need much. With gyms and other non-essential businesses closing around the country due to the coronavirus pandemic, the former Maryland football linebacker instead heads to his basement.

And once he’s there, he has dumbbells. He can do pushups and sit-ups, maintaining a workout regimen despite the unusual circumstances.

His former Terps teammate, Isaiah Davis, faces the same predicament — as do many NFL draft hopefuls around the country. Davis’ solution is much the same, heading to his makeshift gym in the basement, working out on his father’s dumbbells, barbells and yoga mats.

It’s not a glamourous setup, but it’s what they have. So they’re making the most of it.

Amid the coronavirus pandemic and efforts to flatten the curve, it’s just another facet of daily life that looks different than it normally would. In less than a month, the NFL will draft first-year professionals. In less than a month, former Maryland standouts hope to hear their names called, securing an opportunity at the next level. But all they can do for the time being, like so many others worldwide, is adapt to an uncertain situation, controlling what they can control.

And what they can control might take place in their basement, with a few dumbbells lying about and a willingness to adjust on the fly.

“My routine doesn’t change,” Jones said. “I still wake up early, get out there and go through the necessary steps. Just being a professional, because that’s what my career is going to be in a couple weeks.”

As the coronavirus spreads, the NCAA and Big Ten Conference took rapid steps to slow its growth. The NCAA men’s and women’s basketball tournaments were canceled. The Big Ten shut down spring sporting events. Maryland moved to cancel all organized team activities through the end of the spring semester.

With it, the Terps’ Pro Day was canceled, meaning players who didn’t receive an invite to the NFL scouting combine wouldn’t have an opportunity to impress scouts in person.

“Finding out that Pro Day was cancelled was pretty devastating to me and a lot of the other guys who didn’t get combine invites,” Davis wrote in a message. “After putting so much work and preparation into this one day just to find out that I won’t be able to perform made me feel like all of that hard work and dedication was for nothing.”

But he and his former Maryland teammates quickly moved on, not dwelling on something outside their control. Instead, they’ve been in contact with teams over the phone and through emails. They continue to work out and head to fields for individual drills. The dream is still there.

And they take heart in what their highlight film shows. For tight end Tyler Mabry, he looks back on his three seasons of play at Buffalo — his 60 catches, 567 yards and three touchdowns — as a strong indicator of what he’s capable of. And after joining coach Mike Locksley’s squad in 2019, he caught touchdowns in each of his first three games before he said he suffered a right Achilles injury against Temple.

Still, he played through it, starting all 12 games and finishing with 13 receptions. The production dipped, but he feels his resilience through injury proves something to NFL teams.

“I got durability, honestly,” Mabry said. “It just shows the scouts I can play through injury, and I played great competition when I played at Maryland, so I’m happy about that.”

Davis had the opportunity to work out at TEST Football Academy from early January to the middle of March, and while his setup at home doesn’t compare to the high-end facilities at TEST, he feels that experience prepared him for working out on his own.

The Temple Hills native has a soccer field near his house, and that’s where he tests his speed and footwork, and practices linebacker drills. He lives near the Woodrow Wilson Memorial Bridge, running about seven miles along a path as part of his training.

And while so many other players never had official measurements taken at Pro Days, Davis participated in TEST’s makeshift Pro Day over Facebook Live on March 16. Those measurements give scouts at least some idea of what Davis can do physically. In the three-cone drill — testing his agility and quickness — Davis said his time was 6.71 seconds, which would have been the fastest time at the combine for linebackers.

“I understand and acknowledge how blessed I was to receive an opportunity to workout,” Davis wrote, “because I know how so many prospects hadn’t and probably won’t be able to do so before the upcoming draft.”

And Jones — who earned an All-Big Ten honorable mention selection — puts faith in his game footage.

There’s not much else he can do to convince scouts of his ability than showing highlights of his three forced fumbles, 15 tackles for loss, seven sacks and 74 tackles during his 2019 campaign.

“When it comes down to it, I believe the film will speak for itself, the way I play this game,” Jones said. “I think that’s how we should be scouted, you know, with film.”

So in the meantime, Jones keeps working out in his basement and at a nearby field, improving his ball skills in linebacker and defensive back drills. He builds off his recent experience working with Bommarito Performance Systems in Miami.

His basement setup doesn’t compare to what he had available to him in Florida. But it’s what he has available now, and as he and other NFL draft hopefuls attempt to stay in shape despite the coronavirus pandemic, Jones doesn’t need a state-of-the-art setup.

Instead, he needs those dumbbells and those empty fields. He needs a work ethic to wake up early regardless of the circumstances. And he hopes his ability to adapt now will pay dividends later, resulting in his name being called on draft day.