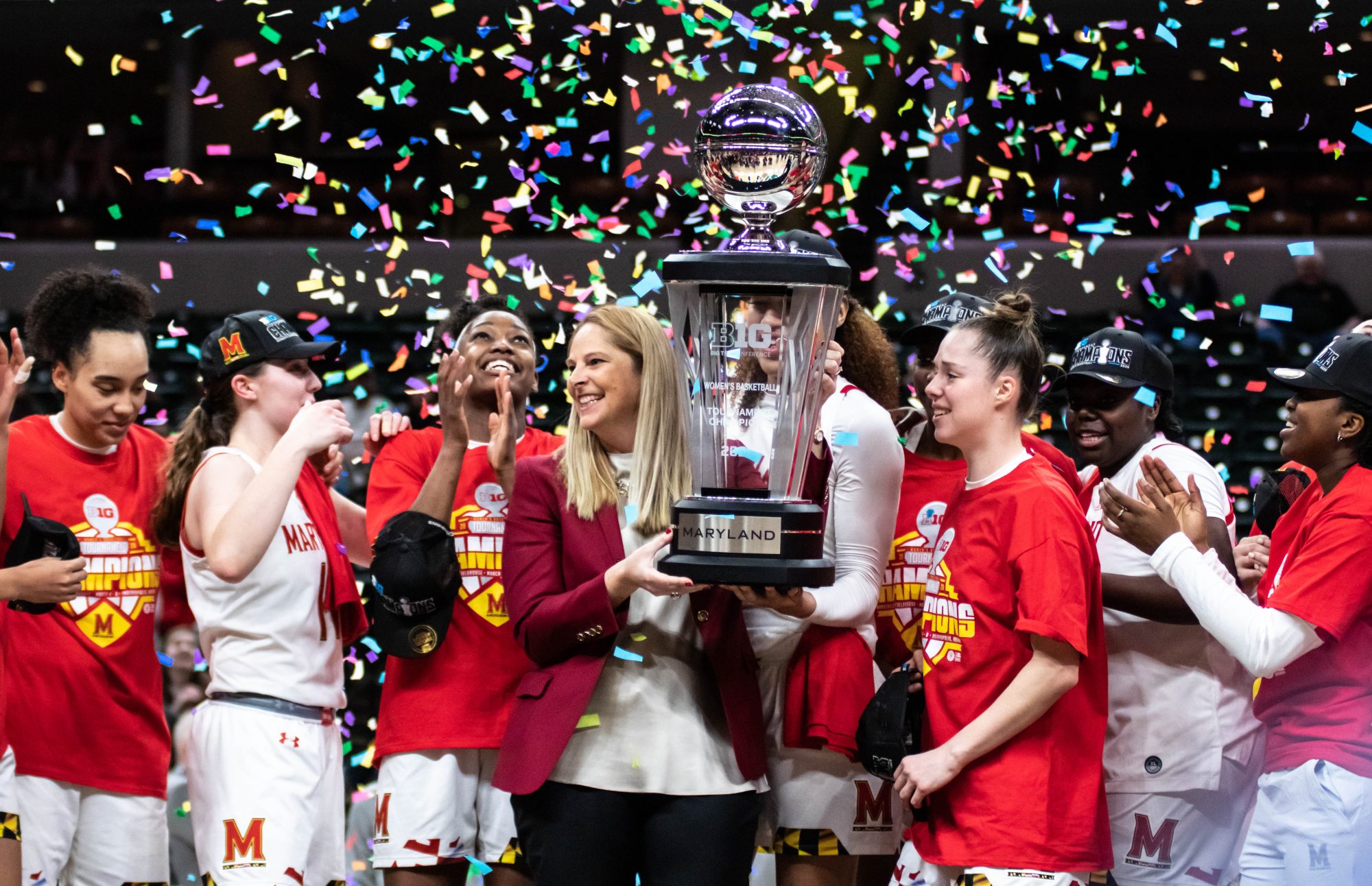 She was one of the youngest players in Sunday’s game, but no one could tell by her performance and poise. The Maryland women’s basketball point guard earned Most Outstanding Player and All-Tournament honors, once again fulfilling the expectations she had for herself coming into the season.

With 17 points, six rebounds and 11 assists, Owusu led the Terps to an 82-65 win over Ohio State, capturing the Big Ten tournament crown for the fourth time in six seasons.

“It’s unreal. It took an entire team, a different player stepping up for us each game, every quarter, took a lot of grit and tenacity,” coach Brenda Frese said. “So incredibly proud of this group, to go through and win the regular season and then to be able to come out and take the conference championship as well.”

The Terps once again got off to a slow start, falling behind 10-5 after giving up two open layups and a pair of triples. The team couldn’t get clean looks on the other end either, but forward Shakira Austin got her team on the board first with a made free throw.

She then earned Maryland’s first field goal with a power move under the basket that moved her defender aside as she easily made the bucket. Both teams went back-and-forth over the next several possessions, with the Terps unable to defend the three-point line while the Buckeyes provided no resistance in the paint.

A triple from guard Blair Watson evened the game at 12-12, but forward Stephanie Jones found her rhythm near the end of the quarter to help Maryland manufacture its first lead.

“‘Ms. Consistency,’ I thought the MVP could of went to either [Jones or Owusu],” Frese said. “She really brought it I thought every single game for us, and we had to have those minutes from the offensive as well as the defensive end.”

Whether it was from shots in the paint or getting to the line, she led her team with eight points in the frame. But a shooting foul from Owusu on a last-second triple attempt helped Ohio State narrow its deficit to two.

Maryland looked sharper on both ends in the second period and began to pull away. Owusu settled into the contest and served as an all-around threat. She pushed the pace, grabbed tough boards and repeatedly created shots for her teammates on her way to 11 points, five rebounds and six assists in the half.

Guard Taylor Mikesell also found success in the second quarter, hitting two triples from the corners. Ohio State had trouble defending Maryland inside and out, and Jones continued to capitalize in the paint for six more points in the frame.

The Terps took away the Buckeyes’ open driving lanes and spot-up triples they had early on and held the opposition to just 29.4 percent shooting in the second period. Ohio State forward Dorka Juhász, who had 10 points in the first, was held scoreless in the second as Maryland held a nine-point halftime lead.

“She was just saying that we need to lock into our defense, and that’s something she’s been saying all year, because our defense leads to our offense,” forward Kaila Charles said about Frese’s halftime message. “She’s saying, ‘Share the ball, have fun, and just go out there and leave it on the court,’ and that’s what we did.”

The Terps came out of intermission ready to put the game away, using a 9-4 run to extend their lead to 14.

Watson swished her second triple of the game on a contested stepback, and Owusu followed with a floater off the glass after sending her defender to the ground with a strong take that forced an Ohio State timeout.

Watson, a Big Ten All-Defensive team member, hit another contested triple once play resumed, letting it fly as soon as the pass touched her hands.

Owusu continued to lead the charge from there. She notched four more points and three assists in the frame.

“We were never going to give up and we were never gonna lay down and I just think it really didn’t matter who was against us,” Watson said. “We’re just gonna go out there and play our game and have fun.”

Maryland went cold to start the fourth, hitting just one of its first six shots, but it maintained control of the game and never let its lead fall below 12.

Austin scored a quick five points to end the poor shooting stretch while Owusu continued to slice up the Buckeyes’ defense and create easy looks for teammates.

Mikesell hit another pair of 3-pointers in the game’s final minutes to balloon the lead to over 20. And Maryland cruised to its 17th straight victory, capturing the tournament title after losing in the final game in each of the past two seasons.

“I’m glad we finally won it. I’ve been here four years in a row, and we lost the last two and it hurt,” Charles said. “[Us seniors] had a big chip on our shoulder. We were motivated and we got the dub and went out with the bang.”