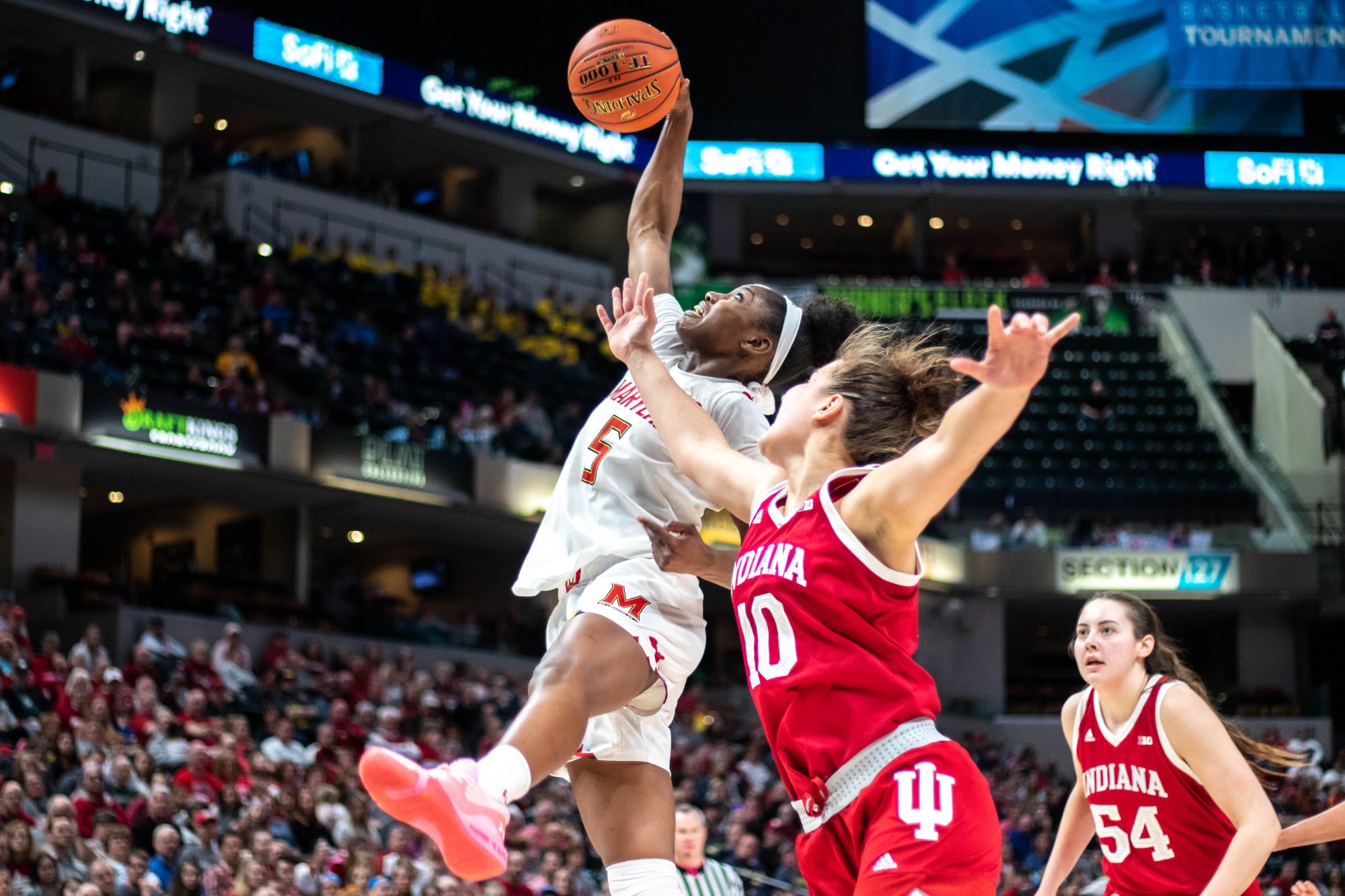 Guard Kaila Charles fights off an Indiana defender as she goes up for a shot during Maryland women’s basketball’s 66-51 win over Indiana in the Big Ten tournament semifinal on March 7, 2020. (Julia Nikhinson/The Diamondback)

She went just 3-for-11 during that timeframe, appearing out of rhythm while her teammates picked up the slack. But something clicked in the third quarter against Indiana on Saturday, and she returned to the All-Big Ten caliber player she is.

Charles dominated the frame, scoring nine of her 11 points in the game. That effort helped extend Maryland’s lead to as many as 19, and the Terps would ride that separation to defeat the Hoosiers, 66-51, to advance to their sixth straight conference tournament championship in as many years.

“Just a really intense atmosphere against a really, really good IU team. I have no doubt that they’ll have a long run ahead of them in the NCAA Tournament,” coach Brenda Frese said. “What makes this team so special is just how they play for one another. That’s why it’s something that we’re really built for with our depth.”

Like last game, Charles began the contest hitting a midrange jumper on game’s opening possession. The Terps then immediately came out in their “12” full-court press, but already having seen the scheme twice this season, the Hoosiers looked prepared to break it.

Indiana scored on its first three shots against Maryland’s typically staunch press. Frese’s squad answered those buckets on the other end, but she had to take out guard Blair Watson — her best defensive guard — almost instantly following a reaching foul.

The Terps struggled stopping Indiana guard Ali Patberg with Watson sidelined and often allowed her to have her way offensively. She quickly tallied five points and two assists in the opening period as the Hoosiers saw themselves down just three points at the end of the first.

“We knew going into this game, Patberg was really hot,” Frese said. “We really wanted to make her have to work for everything. I thought our zone kind of changed the game. … That was probably the difference.”

Forward Shakira Austin hobbled off the court near the end of the quarter after twisting her ankle when diving for a loose ball. Having hurt an ankle once before on Jan. 26 against Northwestern, Frese subbed her out as a precaution and she received treatment next to the bench from the team’s athletic trainer.

Austin re-entered the game in the beginning of the second quarter, but both teams went cold and shot around 30 percent from the field. Although Patberg added six more points to her total in the frame, she appeared progressively more fatigued from carrying much of her team’s offense.

Maryland found some offensive success in transition but couldn’t stay out of foul trouble. The team garnered six whistles in the period to Indiana’s two, much to the frustration of Frese, who was forced to constantly make substitutions.

“[Being in foul trouble] gave us time to analyze the game a little bit, see how the refs were calling it,” Watson said. “We were also in our own heads a lot, so to get out of our own heads and get pouring into others was huge.”

The Terps pulled away a bit with a 7-0 run in the back half of the frame, but both teams failed to score for a three-minute stretch to end the quarter before a quick three points from the Hoosiers in the half’s closing seconds.

Patberg scored a layup out of intermission, but Maryland went on a 17-0 run over the next 6:30. Austin broke the ice with a fadeaway jumper, then forward Stephanie Jones came alive.

She quickly hit three layups, two coming from hard-fought offensive rebounds that mirrored her third-quarter effort the day before in the team’s win over Purdue.

“I’m just trying to set the tone as a senior and especially for our underclassmen,” Jones said.

Her energy infected the rest of her teammates. Charles was the biggest beneficiary, scoring nine in the period behind screeching Maryland fans after tallying just two points in the first half. She helped extend the Terps lead to as many as 19, a margin the Hoosiers would never recover from.

“When she got the one and-1, I went up to her and I was like, ‘Nobody can stop you. Do what you do. You are who you are and nobody’s going to change that,’” Watson said. “Having her be confident herself and knowing that she’s a great player and can do whatever she wants is something that’s huge for us.”

Indiana never quit, though. It went on a 10-4 run to start the fourth, with a corner triple following a missed charge call cutting its deficit to 11. Frese then called timeout to regroup her team. The Terps continued to miss shots on offense but kept their opposition scoreless for a while as well as the clock continued to wind down.

Needing one more push to seal the deal for her team, Maryand turned to freshman guard Diamond Miller. She hit a corner triple to end the scoring drought and hit two more shots in succession to bring home the win.

Frese couldn’t help but glance over to her bench and smile while watching the dominant 8-0 stretch.

Behind 29 combined points from the team’s two freshmen, Maryland won its 16th straight contest and advanced to the conference tournament title game.

“It was electrifying. It definitely got us hyped,” Charles said of the two freshmen’s fourth quarter performance. “It’s just great to see how confident these two are playing. … They’re finally being confident, just being comfortable and just providing for us.”