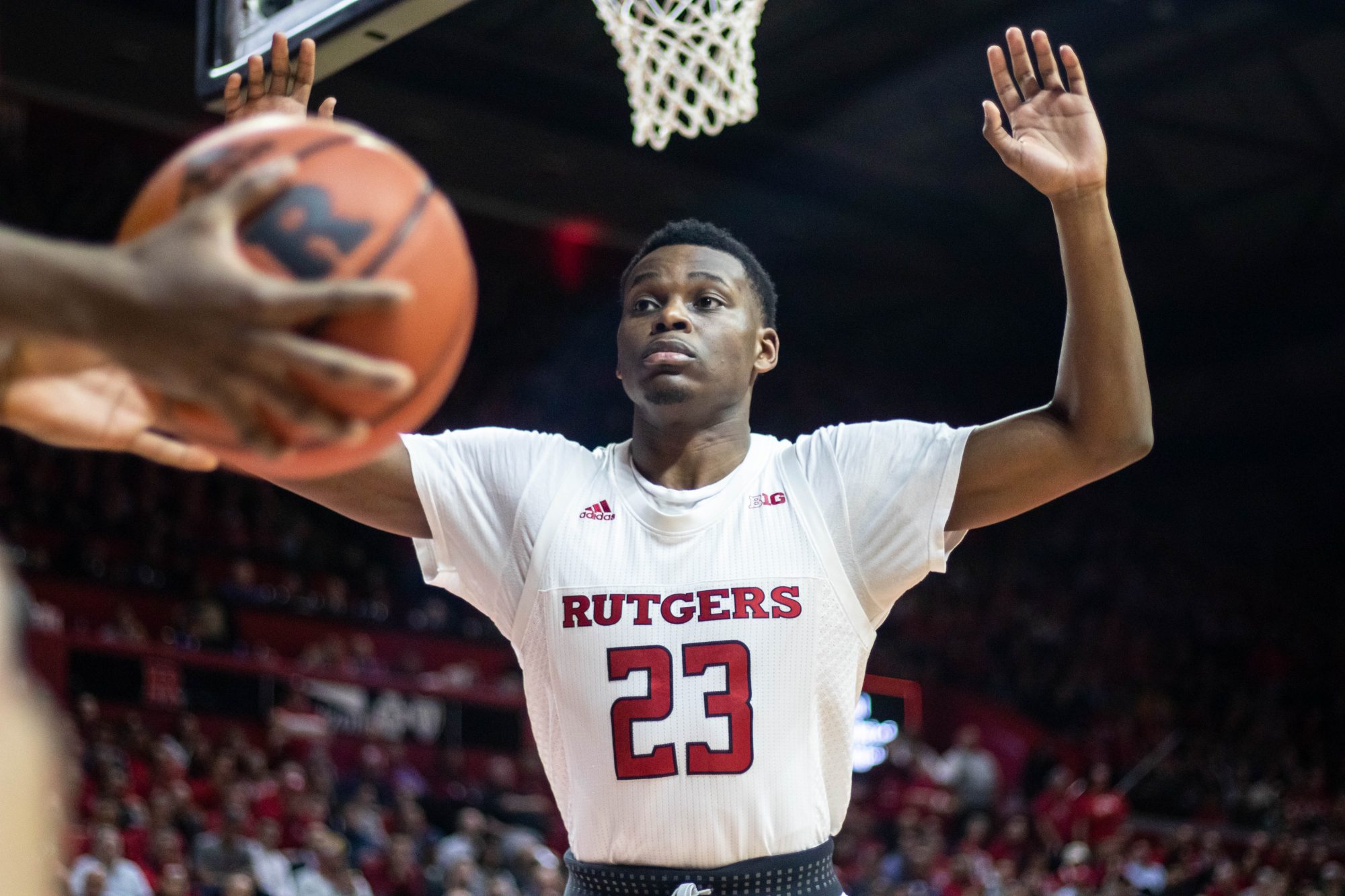 PISCATAWAY, N.J. — Guard Montez Mathis took a step, then another. In an instant, he was at the rim, mirroring Maryland men’s basketball forward Jalen Smith as he rose.

Mathis extended his right arm, soaring past Smith in the process. And as soon as he slammed the ball through the rim, Mathis peered at the 6-foot-10 Smith as a sea of red erupted in the background.

“I was gobsmacked — it was a huge play,” forward Akwasi Yeboah said.

By that point, the game was all but decided — Mathis’ dunk pushed the Scarlet Knights’ lead to 20 with a little over six minutes left, a precursor to Maryland’s 78-67 defeat on Tuesday night.

But for Mathis, a Baltimore native who grew up playing against fellow Baltimoreans Smith and Darryl Morsell, the moment was all-the-more sweet — an exclamation mark on an impressive all-around display in which the sophomore poured in 15 points on one end and pestered guard Anthony Cowan on the other.

“When coach [Steve Pikiell] called his name, he was ready,” guard Jacob Young said. “He started off great — he sparked.”

[Read more: With 78-67 loss to Rutgers, No. 9 Maryland men’s basketball misses another chance at title]

Mathis, Smith, and Morsell’s history goes back well beyond their college years, taking shape on the AAU and high school circuit as highly-touted recruits at The John Carroll School and Mount Saint Joseph’s, respectively.

“Me and Montez was close growing up,” Smith said. “We played AAU against each other, we played high school against each other. He’s a great player, athletic — he’s pretty much the slasher and shooter Rutgers need.”

The added incentive of competing against childhood friends enticed Mathis, whose focus was evident hours before he skied above Smith. In fact, it materialized while the sophomore jogged onto the floor for warmups, shot after shot whetting the nylon, Young said.

“He definitely takes it a little personal,” guard Geo Baker said. “That’s right in his home, right where he lives. … Definitely a little more fire.”

And after posting six points in the opening 20 minutes, Mathis’ confidence — fortified by playing on the same courts with the likes of Smith and Morsell as a youngster — came to the surface in the second.

It started early, with Mathis slashing to the rack before getting fouled by Morsell. Thirty seconds later, Mathis set up Yeboah for a three.

Then guard Ron Harper Jr. lined up from three, the benefactor of a Mathis assist on the break. Rutgers’ six-point halftime advantage had swelled to 13 by then, largely based on Mathis’ unselfish play.

And as Mathis’ influence became more and more pronounced on offense, his defensive output grew, too. It was a difficult task given his assignment: Cowan.

[Read more: Maryland men’s basketball knows “what everybody wants.” It knows how to get there, too.]

Cowan enjoyed an efficient first half, notching 13 points on 4-for-8 shooting. Spurred on by his burgeoning offensive impact, though, Mathis largely neutralized Cowan’s threat alongside Young, holding the Maryland star to six points on 2-for-5 shooting the rest of the way.

“We talked about him a great deal,” Pikiell said of Cowan. “He’s a real hard guy to guard, but I thought [Mathis and Young] were really locked into the gameplan, they did a good job — he didn’t get anything easy.”

Buoyed by Mathis’ prowess on both sides of the ball, the Scarlet Knights looked unfettered by the challenge of facing a top-10 team pushing for a share of the Big Ten regular-season title.

Instead, confidence rained down the Rutgers Athletic Center walls, each bucket prompting a vociferous response from the Scarlet Knights faithful. And no bucket lifted more onlookers from their seats than Mathis’ last, a tomahawk jam over Smith that seemed to have a little added Baltimore-fueled ferocity on it.

Mathis’ slam bookmarked an emotional Senior Night — one that started with Rutgers’ veterans being honored at halfcourt and ended with them being swamped in a flood of joy.

But it was the Baltimorean who stole the show, a microcosm of a gritty two-way performance that pushed the Scarlet Knights even closer to an NCAA tournament bid.

And it was evident in his leap to the rafters, the conductor of a choir of noise who stared down his longtime friend in delight and defiance — a tale rooted in Baltimore.