Maryland men’s basketball knows “what everybody wants.” It knows how to get there, too. 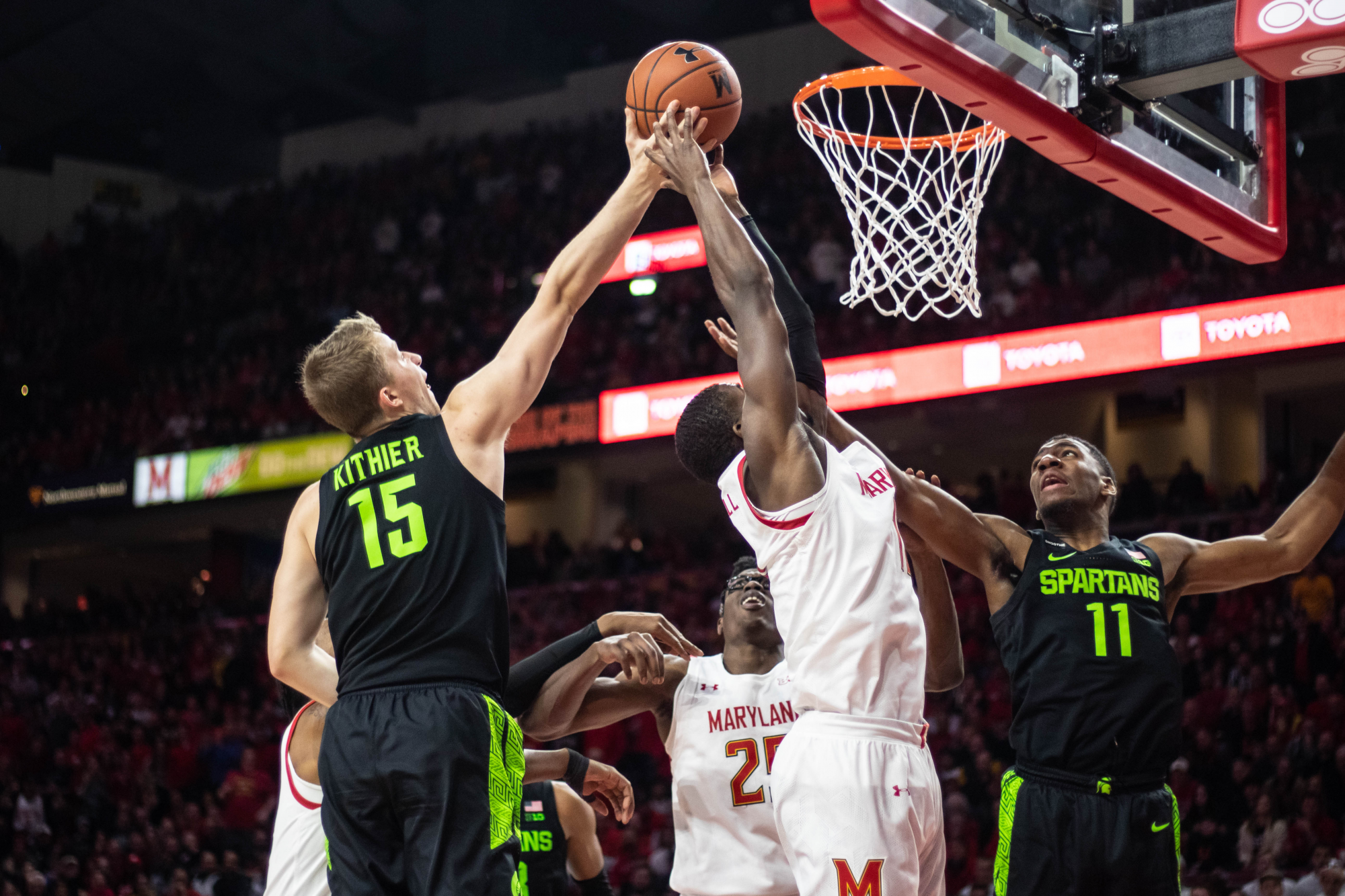 Coach Tom Izzo didn’t, though. He knew there could still be a route back to the top of the conference.

“We’ve had our chances to do something,” Izzo explained after his Spartans beat the Terps 78-66 on Saturday night. “I said, ‘If we go to Maryland and beat them, and we can go to Penn State and beat them, then maybe we deserve for something to happen.’ But if we couldn’t do that, you know, it’s ‘Move on to the Big Ten tournament.’”

The Terps, on the other hand, haven’t experienced anything like their current position since joining the Big Ten in 2014. But the team is taking a similar approach to Izzo, attempting to control what it can control. And with two games remaining in the regular season, two wins would secure Maryland an outright conference title — no matter what happens elsewhere around the league.

“If we take care of what we have to take care of, everything will fall into place,” guard Darryl Morsell said.

When the team started 3-3 in conference play, coach Mark Turgeon admittedly didn’t know if his team would be in the front-running position it now holds. That all changed in the middle of January, when a win against Purdue, and a fiery halftime speech in the next game against Northwestern, ignited a nine-game winning streak.

On the strength of that stretch, the Terps opened up a lead atop the ultra-competitive Big Ten conference, which now features eight teams in the AP Top 25.

“It means a lot, and it opens up a lot of opportunities — a lot of doors for us,” forward Donta Scott said. “So we just got to go out there and see every door as open.”

Maryland had a chance to clinch at least a share of the regular-season Big Ten title during Saturday night’s prime-time matchup against Michigan State, but the Spartans slammed that door shut for the meantime.

Aside from the coterie of Spartans fans behind Izzo’s bench, the sellout crowd packed into Xfinity Center was hoping to see its beloved Terps secure its first regular-season title since 2010, when Maryland was ACC co-champions with Duke.

Guard Cassius Winston and the Spartans had other ideas. Winston scored 20 points to prevent Maryland from ever taking a lead and preclude any celebration. In the process, Michigan State also kept its hopes alive for a regular-season crown.

“We knew it was going to be a hostile environment, we knew they had a chance to win a championship, and we knew how much was riding on the line,” Winston said. “We’re not afraid of anything.”

All was not lost for Maryland in the conference race, however. The loss was a squandered chance to move up the AP Top 25 and a missed opportunity to ascend up the NCAA tournament seeding list.

In terms of the regular-season standings, and the pursuit of the top seed in the Big Ten tournament, the Terps still control their fate.

“Everybody would like to be in our position, I know that,” Turgeon said. “We’re in a great spot.”

Turgeon’s team has two games remaining in the regular season — Tuesday night’s road matchup against Rutgers and the finale against Michigan, which is in College Park.

Splitting the two games would set up a co-champion scenario, where tiebreakers would determine seeding for the conference tournament. If Maryland does split its remaining games, as many as four teams could tie for the regular-season conference title.

Things get really interesting if Turgeon’s team drops both of the final two contests. One scenario — depending on scores elsewhere — could result in a six-way tie for the regular-season championship between Illinois, Iowa, Maryland, Michigan State, Penn State and Wisconsin.

Depending on tiebreakers in that likely outlandish scenario, the Terps could fall out of the top-four seeds, meaning they wouldn’t receive a double-bye in the Big Ten tournament.

All of that is complicated and convoluted for the parties involved.

For Maryland, it’s simple: Win the last two games and the program will secure the outright league championship — and the No. 1 seed in the conference tournament — for the first time since the 2001-02 season, which ended with a national championship.

“I know what everybody wants, and we want it, too,” Turgeon said. “Hopefully we can pull it off.”