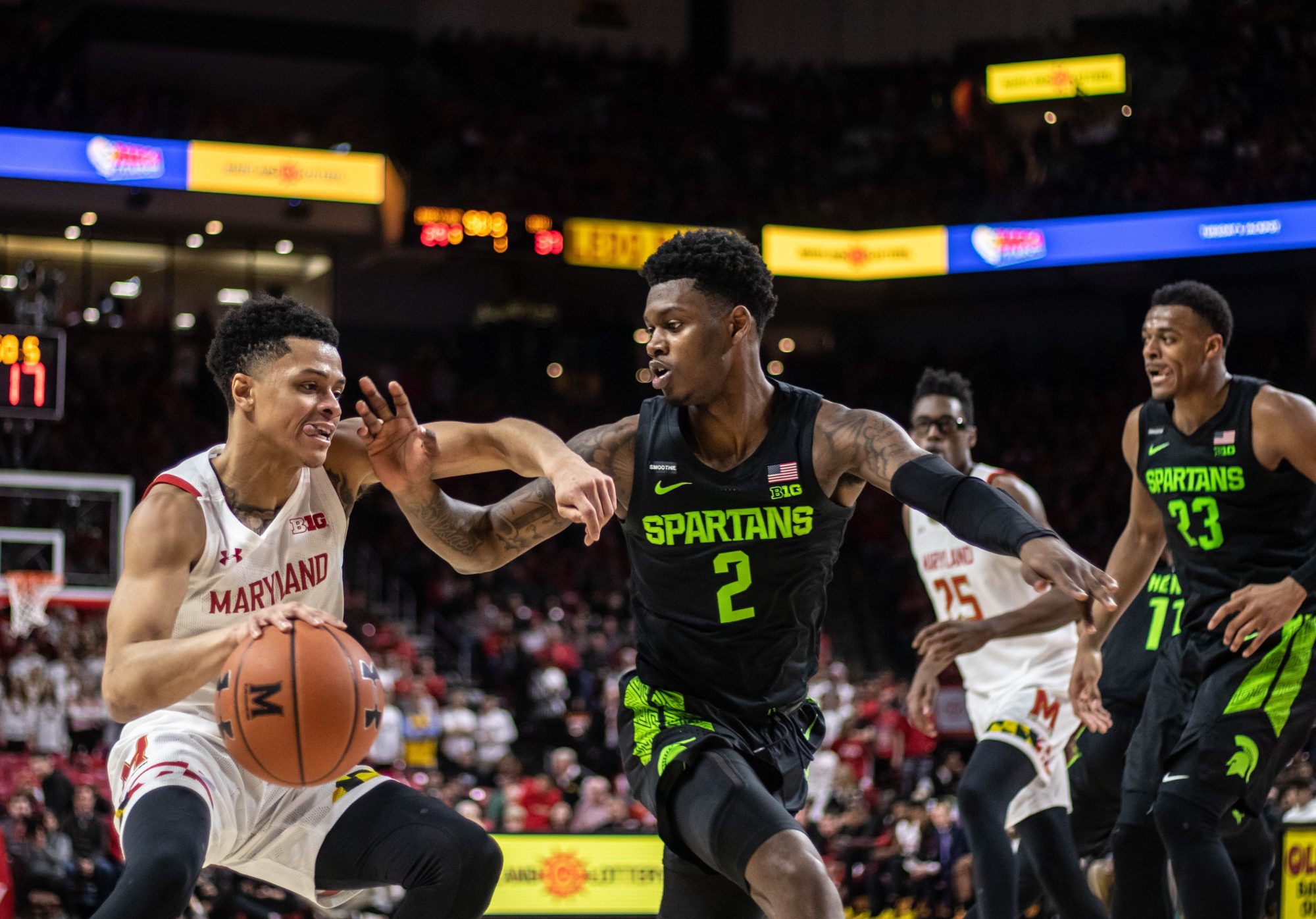 Rocket Watts didn’t say it aloud in the buildup to a rematch with Maryland men’s basketball, but his Michigan State teammates noticed it from the way he played Saturday night at Xfinity Center.

They could see the extra fire within the freshman guard, charged with defending Anthony Cowan for the second time this month. They could see that Cowan’s late-game success at the Breslin Center on Feb. 15 — where he scored the final 11 points to lead a comeback win — hadn’t been forgotten.

“You could tell by his performance that it was probably on his mind,” forward Xavier Tillman said.

Watts didn’t hold the task of guarding Cowan completely to himself, but in his second matchup with the No. 9 Terps’ senior stalwart in the last few weeks, he displayed how bright a future he has. The Detroit native played a large part in pestering Cowan throughout with a lockdown defensive effort and a few big-time shots to silence the Xfinity Center crowd — similar to the way Cowan had silenced Watts’ home court earlier this season at Watts’ expense.

“Rocket did an unbelievable job on what I think is one of the great players in our league,” Spartans coach Tom Izzo said. “Cowan, he’s a hell of a player.”

When at the Breslin Center two weeks ago, Watts was ready to lock in defensively for the final three or so minutes. He had already played Cowan tough to that point, holding the guard without a field goal for about 33 minutes.

He was so locked in that he slapped the floor with both palms as Cowan dribbled down the floor, Maryland trailing by seven and in need of another eye-opening comeback. Once his hands hit the court, though, the Terps went on to score the final 14 points of the contest, dooming Michigan State to a 67-60 defeat.

Watts didn’t slap the floor Saturday night. His play did the talking. When Cowan drove the lane with five seconds remaining before halftime, Watts kept his feet moving, arms raised, backpedaling toward the rim. And when the referees blew their whistles, it was for Cowan’s travel — one of his four turnovers.

It was those moments Watts had envisioned ahead of Saturday’s contest, chances to redeem himself after Cowan left him throwing his hands up in frustration toward the end of the Feb. 15 game as 3-pointer after 3-pointer fell home.

[Read more: Maryland men’s basketball can get out of the biggest holes — but it wants to stop digging]

“He had been talking about that all week,” guard Cassius Winston said. “[Cowan] got him at Michigan State, and these last couple games he took that really to heart and coming into this game he really said he was locked in, really said he wanted to burn him the entire time.”

Cowan still ended up with 13 points, but it came on 6-for-15 shooting. It was Watts — as well as forward Aaron Henry, a taller defender to offer a different look — who helped keep him so off-balance. Cowan’s been shaky at times throughout the past three games, not hitting a 3-pointer since the first half against Northwestern on Feb. 18 and going cold since breaking out late against the Spartans and Watts in East Lansing.

In the College Park rematch, however, Watts had his say. On top of 13 points — including three triples — he remained glued to Cowan’s hip, hyped up over the possibility of facing one of the best guards in the Big Ten a second time and finding a remedy for his mistakes in the first.