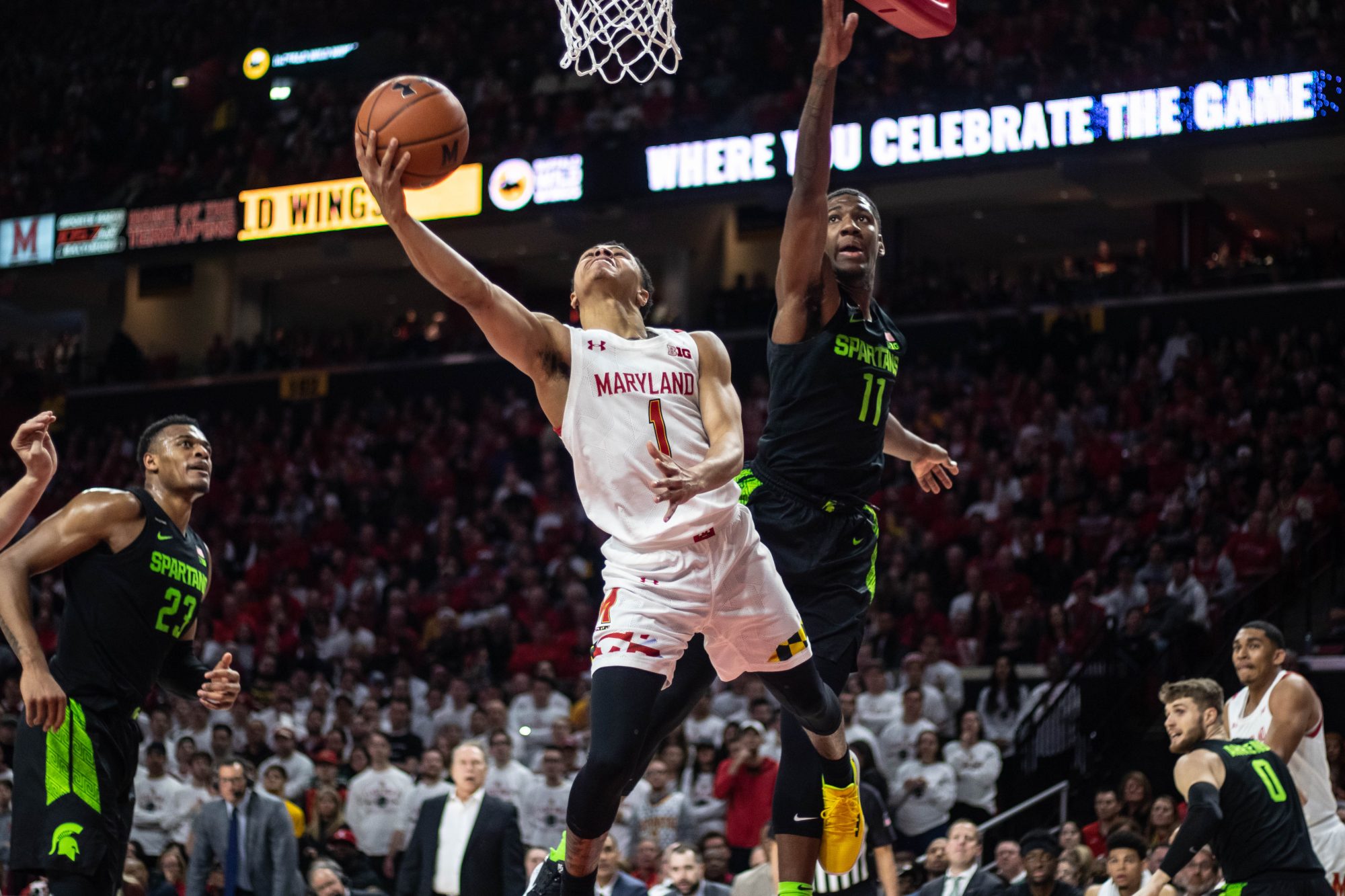 With one minute remaining and Maryland men’s basketball guard Anthony Cowan’s desperation fadeaway jumper clanking off the front iron, the sellout Xfinity Center crowd began to file out of the building.

It wasn’t to beat traffic while their team wrapped up another home victory. Rather, for the first time this season, it was to bemoan a loss and avoid watching the inevitable celebration for the opposition.

Like Cowan’s shot, the No. 9 Terps’ effort came up short. They battled back from multiple double-digit deficits, but could never break through in front of a crowd hoping the night would end in celebration.

Instead of watching their team clinch at least a share of the Big Ten title on Saturday night, the fans headed to the exits after the Terps’ second loss in the span of a week as No. 24 Michigan State dashed those hopes with a 78-66 victory.

“Wasn’t our night,” coach Mark Turgeon said. “We tried hard, guys — maybe tried too hard. Our guys know what’s at stake, and that’s a lot on a team.”

[Read more: Maryland men’s basketball can get out of the biggest holes — but it wants to stop digging]

The buildup to the 8 p.m. tip was hours in the making. Players and coaches sat and participated in ESPN’s College GameDay over eight hours beforehand. And Maryland students packed the stands early to rehearse the annual flash mob.

But despite the buildup and anticipation, the Terps had a delayed start, falling behind 9-0 before Turgeon called timeout. Eventually, Turgeon’s team found itself in a familiar place: down double-figures, as the Spartans built a 17-5 lead.

“I guess the excitement got to us too much,” forward Jalen Smith said. “And we just kind of let it slip out of our hands.”

Forward Donta Scott scored a hook shot and hit a corner 3-pointer during a 7-0 run to momentarily ignite the Terps’ offense.

A first half of back-and-forth runs ensued, preventing Michigan State from pulling away early. Maryland never led, but forward Ricky Lindo’s 3-pointer tied the score at 23 midway through the half.

The Spartans countered, but the Terps’ deficit stayed within single digits until the closing seconds of the half.

After the officials whistled guard Anthony Cowan for a travel with 1.9 seconds remaining, nullifying a circus layup, his counterpart Cassius Winston caught a pass and unleashed a heave that swished through the net to beat the buzzer.

Cowan allowed Winston to run past him, giving the Michigan State star a chance to progress up the floor. When the shot fell through, Turgeon turned and berated his senior guard for his non-committal defensive effort.

The five-point swing gave the Spartans a 40-29 advantage, led by Winston’s 13-point first half in the rematch of the Terps’ 67-60 victory two weeks prior, when it was Cowan who stole the show.

Michigan State rode the momentum out of halftime, building its lead up to 16 before Turgeon had seen enough. Following a timeout, Maryland executed an inbounds pass that led to a Darryl Morsell dunk.

But the Spartans had the answer on the other end, as forward Malik Hall hit a jumper just before the shot clock expired.

A minute later, Terps guard Hakim Hart knocked down a 3-pointer, his first made shot since December. But Hall once again responded on the ensuing offensive trip, nailing a triple — three of his 16 points after he came into Saturday’s game averaging 4.3 per contest.

“We just could never really get control of the game,” Turgeon said. “We got some stops, but then we couldn’t rebound.”

Down 17, Maryland finally found some success with post-ups for forward Jalen Smith on the interior. Finding Smith down low helped key Maryland’s comeback against Minnesota on Wednesday, and it once again helped chip into a lead Saturday.

Smith’s work in the post led to a three-point play and a driving layup minutes later to get the home side back within single-digits at 66-57 with 5:28 remaining with 7:28 to play.

The Xfinity Center crowd suddenly returned to the frenzied atmosphere it had early in the game.

On the other end, though, the Spartans silenced the crowd with an offensive rebound that led to a 3-pointer from guard Rocket Watts, three of 19 second-chance points Michigan State scored.

Those 19 second-chance points and the Spartans’ hot starts to each half were too much to overcome for Turgeon’s team. The sellout crowd was reduced to an arena of near-empty sections by the time Winston dribbled out the clock.

“I’ve played a lot of great places, but not many better than it was out there tonight,” Michigan State coach Tom Izzo said. “For all your fans that were booing me, I need to give you a little respect because that was a hell of an atmosphere.”

Izzo and the Spartans got the last laugh, though, preempting any celebration from happening on Saturday night and keeping their hopes alive for the regular-season championship and top seed in the Big Ten tournament.