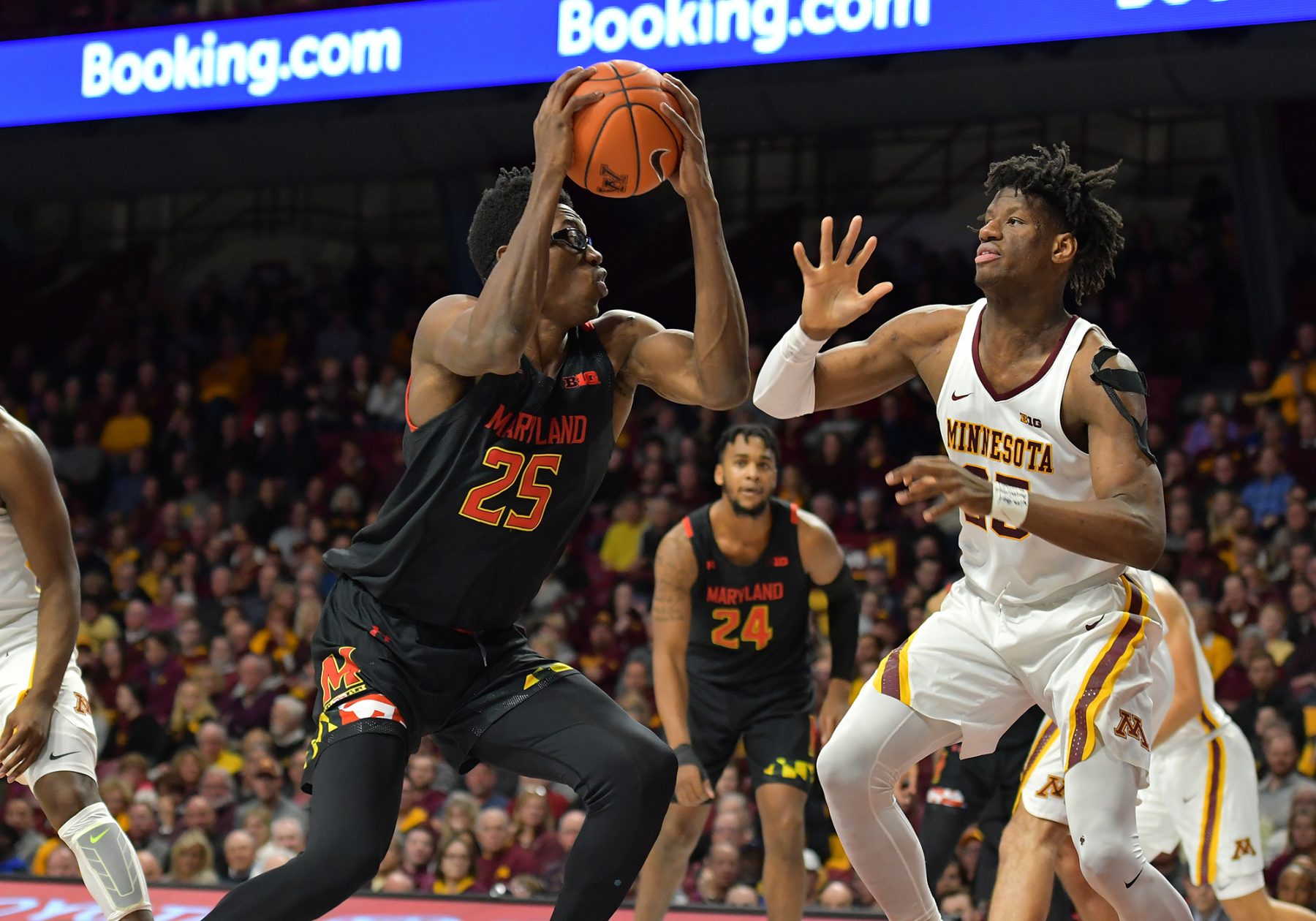 Forward Jalen Smith battled foul trouble in the first half but played a large part in Maryland men's basketball's 74-73 win at Williams Arena on Feb. 26, 2020. (Eric Andre/For The Diamondback)

MINNEAPOLIS — Once Jalen Smith’s three-point attempt banged off the far iron and out, the Maryland men’s basketball forward raised his arms to his head in exasperation.

With about 40 seconds remaining in Wednesday’s matchup with Minnesota, Smith had an opportunity to tie the game. He came off a high ball screen to the right wing, caught Aaron Wiggins’ inbounds pass and heaved what could have been a game-tying triple toward the rim.

But like so much of Smith’s night at Williams Arena, the 6-foot-10 Baltimore native would find his redemption before that final buzzer sounded. He may have missed that trey, but 28 seconds later he’d rise up and slam down a critical put-back dunk that set up Darryl Morsell’s game-winning three, the one that sent Smith racing down the floor to meet Morsell in celebration.

And while Smith battled foul trouble throughout the first half, his time off the court seemed to only light a fire within Smith. He came out of the locker room with his team trailing by 16 and never left the floor again. So, as he posted a second-half double-double, Smith once again proved how different — and how much better — the Terps are when he’s on the floor.

“It was pretty obvious, wasn’t it?” coach Mark Turgeon said.

By the end of a 26-second span early in the first half of Wednesday’s eventual 74-73 win, Smith was left incredulous. Moments earlier, he had been called for a foul in the lane. Shortly after, as he battled for an offensive board, whistles blew once more, sending Smith to the bench for nearly 12 minutes.

[Read more: For Darryl Morsell, his game-winner vs. Minnesota is a product from years of work]

And once he returned, he managed to stay on the floor for just 22 more seconds before he stood with his hands out, unable to fathom another over-the-back call. During those four minutes on the floor in the first half, Smith managed two of his team’s 31 points. Then he watched on while the Golden Gophers shot 57 percent in the opening period to create a 16-point advantage.

“Those are frustrating calls and tough to deal with,” Turgeon said. “But we overcame it. I didn’t think we were going to, but we did.”

Maryland overcame it with Smith on the floor. For those final 20 minutes, his aggression showed through — but it was manageable, choosing his spots and not earning his fourth foul until 2:06 remained.

And while Smith knocked down a big 3-pointer — trailing guard Anthony Cowan before pulling up from deep — so much of that second-half run was made possible through Smith’s work down low. He drew fouls and knocked down five of his free throws. He pulled down four offensive boards and another eight defensive rebounds. He scored 14 of his 16 points in the final frame, including that critical put-back slam.

“He had to be assertive for us to win,” Morsell said. “He definitely asserted himself and pretty much dominated the second half.”

Smith said there was a focus on pick-and-roll plays ahead of the contest, but things changed in the second half. Maryland needed to do something, and Smith found himself at the post.

When Wiggins bounced a pass to Smith down low, his back to center Daniel Oturu, Minnesota quickly double-teamed him. Smith used his dribble, backed out toward the three-point line and then maneuvered around Oturu on a drive to finish at the rim.

Maryland continued to find Smith from then on, taking advantage of his developing post moves.

“It’s still a work in progress. Last year, Bruno did a lot of it and I was posting up against 4s mostly, and now I’m posting up against all the top bigs in the league,” Smith said. “They started feeding me, and I started scoring and they just kept coming back.”

That’s been a successful recipe for much of this season, and it’s made Smith one of the most important players on the team — an inimitable presence inside.

This season he’s averaged a double-double per game — 15.2 points and 10.5 rebounds — and Smith’s second-half performance was a major piece of the Terps’ 33-point swing, stealing a victory from the Golden Gophers.

“When he gets going, he makes the entire team better,” said Morsell, his former high school teammate. “It’s crazy, cause y’all just seeing him from his freshman year to this. I’ve seen him since he was little, so it’s good to see him being assertive and just imposing his will.”

Against Ohio State on Sunday, more early foul trouble tempered Smith’s influence. The same threatened again on Wednesday. But Smith seemed to channel those rare shortcomings, turning the second half against Minnesota into a chance to respond.

“Stix just decided he had enough with the way things were going the last two games,” Turgeon said.

So he came out aggressively in the second half, right when his team needed it. And time and time again, he answered the call.