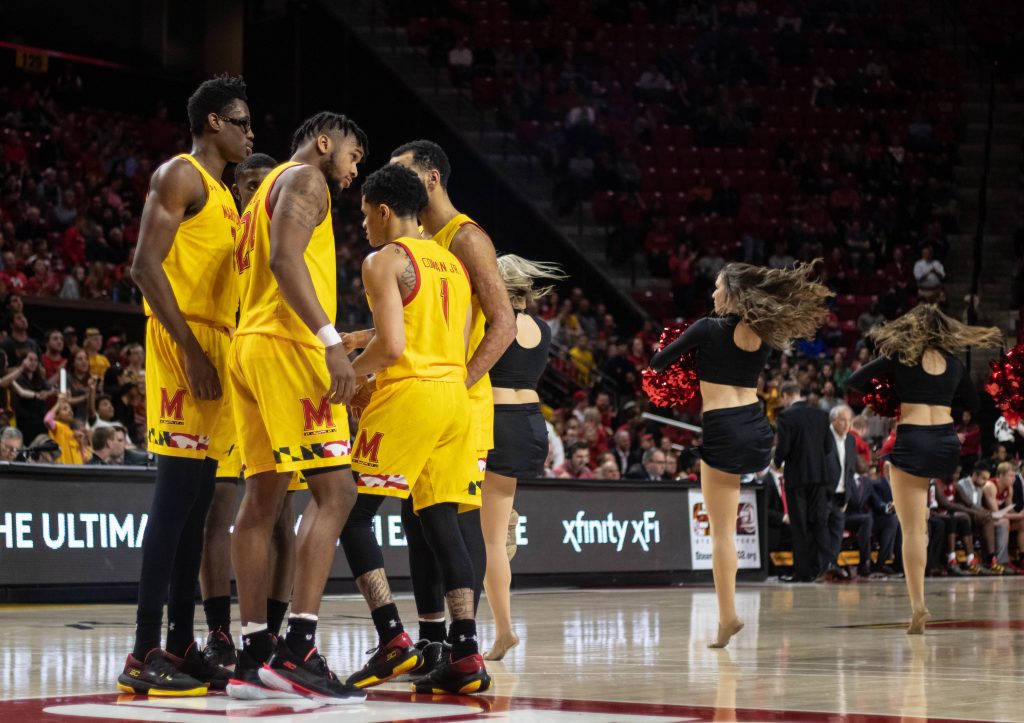 Maryland men's basketball huddles up during its 72-70 win over Nebraska on Feb. 11, 2020, at Xfinity Center. (Julia Nikhinson/The Diamondback)

Aaron Wiggins couldn’t help but laugh at the absurdity of it all. Standing just off the court at Williams Arena where No. 9 Maryland men’s basketball had pulled out another comeback win about 20 minutes earlier, the guard shook his head at the mere concept.

And then he admitted — despite the elation at the end of things — he and his teammates would much rather not be in these situations.

“I mean,” he said with a chuckle, “we hate putting ourselves in a little hole.”

But so often, the Terps somehow find a way to drag themselves back out of it. While they trailed by 16 points at halftime against Minnesota on Wednesday, Darryl Morsell’s late 3-pointer completed that 74-73 victory. That’s one of six double-digit deficits Maryland’s gone on to overcome so far this season, and Wednesday’s 17-point comeback was the program’s largest since 2004, according to Maryland athletics.

It’s not a place they want to be, though. So with three regular season games remaining — including Saturday’s matchup with Michigan State, a chance to clinch a share of the Big Ten title — Maryland appreciates the fight it can show when trailing in games. They just don’t want to have to show it.

“That’s ideal, for us to play a complete 40-minute game,” guard Eric Ayala said. “You know, just dominate throughout the whole game.”

The Terps are 23-5. They’re on the precipice of securing their first conference title since 2010, but they’ve rarely dominated a game from start to finish this year, beleaguered throughout by slumps or slow starts or an opposition that just can’t seem to miss.

The latter is what happened against the Golden Gophers, as they jumped out of the gate making their first six shots. To Wiggins, the defense was good. The energy was good. Sometimes deficits build anyway.

“I mean, it’s tough to avoid situations where a team comes out and hits five of their first six threes,” Wiggins said Friday.

So Maryland fell behind, and far from the first time they caught back up — taking a lead with about a second remaining. Coach Mark Turgeon’s team has been there before, overcoming 14- and 15-point deficits against Illinois this season and another 15-point deficit against Northwestern.

Then the Terps trailed by seven with 3:24 to go the last time they played Michigan State, and guard Anthony Cowan nailed three straight threes to pull them out of that conundrum, too.

“When you’re on the road and stuff, and you get down by huge deficits, I feel like it brings the group of guys just together a little bit more,” Wiggins said. “Everybody starts to believe a little bit more; you start to see a little bit more passion come out from every individual player in the game.”

[Read more: For Darryl Morsell, his game-winner vs. Minnesota is a product from years of work]

With ESPN’s College GameDay descending on College Park for Saturday night’s rematch with the Spartans, analyst Jay Bilas was made available to the media Friday. On paper, he said, Maryland checks every box for what a team needs ahead of a deep tournament run.

But its ability to pull out the improbable — finding wins when everything pointed to a loss instead — that may be the most critical aspect.

“One of the measures, at least in my judgement, of a quality basketball team that has the chance to win a championship is: Do they win when they don’t play well?” Bilas said. “And Maryland has proven that they can do that.”

Is that a place Maryland wants to be, particularly as the postseason nears? No.

There’s value in that inane ability to pull victories out of the magician’s hat, though, even as the practice gets crazier and crazier, the results all the more surprising.