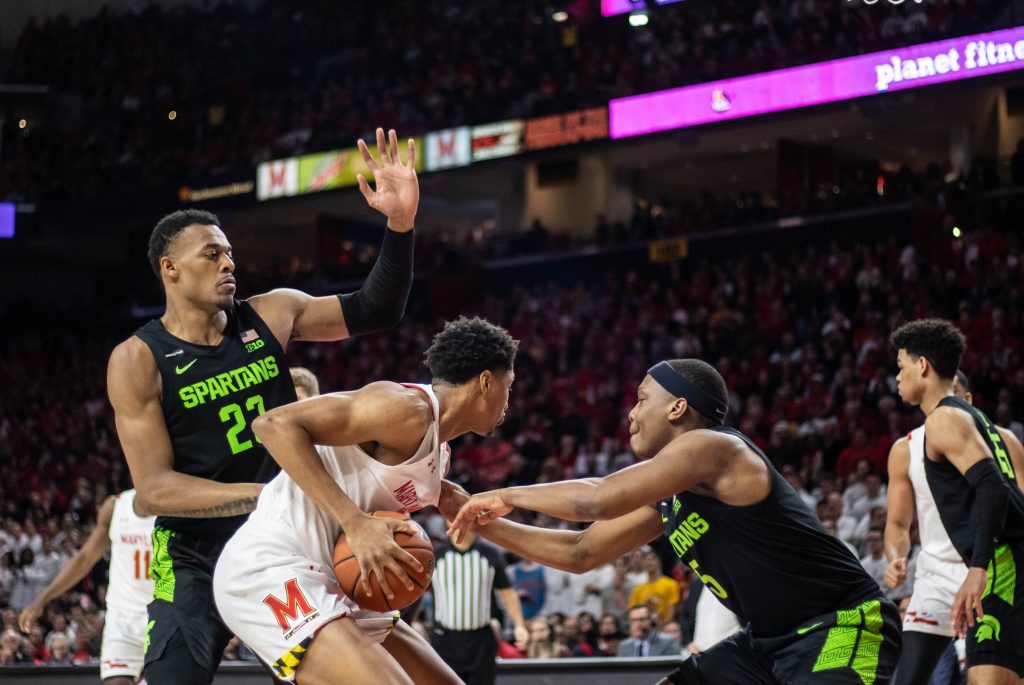 Down 16 points with 15 minutes to play, Maryland men’s basketball tried to start the early makings of a comeback when guard Hakim Hart caught a pass in the corner and confidently sank a 3-pointer.

The Terps looked to have a defensive stop on the ensuing possession, but Michigan State forward Xavier Tillman corralled an offensive rebound and kicked a pass out to forward Malik Hall, who didn’t waste any time launching an attempt of his own from beyond the arc.

His shot hit the front of the rim, bounced up to the backboard and fell through the hoop, causing coach Mark Turgeon to shrug in frustration.

In a matchup of two of the Big Ten’s best inside-out tandems — Maryland’s Anthony Cowan and Jalen Smith, and the Spartans’ Cassius Winston and Tillman — Hall and other Michigan State role players outplayed the Terps’ supporting cast to lead the Spartans to a 78-66 victory.

“We’ve got to be a deeper team if we’re going to beat a team like that,” Turgeon said. “And they were terrific tonight.”

Both teams’ respective top duos left their mark on the game. Cowan scored 13 points, and Smith led the Terps with 20. Winston carried the load for the Spartans with 20 points, and Tillman dropped 14.

Combined, Maryland’s pair scored 33, just one point shy of Michigan State’s tandem. But those points from other sources proved to be the difference.

Maryland freshman Donta Scott turned in a double-figure scoring effort with 10 points, but the Terps didn’t get the complementary scoring production they needed from their sophomore wing players — crucial components to the offensive operation.

Guard Eric Ayala finished the night with three points on 0-for-4 shooting in 21 minutes, and Maryland was outscored by 27 points when he was on the floor. Down the stretch, Ayala sat on the bench as Hart, a freshman seldom used until recently, stayed on the floor.

Fellow guard Aaron Wiggins, the team’s third-highest scorer at 10.4 points per outing, also struggled. The sophomore finished with four points on 1-for-7 shooting, including 0-for-4 from beyond the arc.

Before the season, some heralded Maryland’s depth as one of the major strengths of this year’s team. That depth took a slight hit when Makhel and Makhi Mitchell left the team in late December, but they didn’t provide much scoring during their time in College Park.

Other than those departures, the surrounding pieces have remained intact and clear of injuries. Instead of being one of the deepest teams he’s ever coached — as he said just before the season began — Turgeon has been left searching for answers.

This has resulted in a shuffle between Serrel Smith and Hart for playing time at guard. His search has turned up a rotation of three big men in Ricky Lindo, Chol Marial and Joshua Tomaic to give minutes when Smith needs a rest.

On Saturday, Hart scored five points and earned playing time late in the game, an indicator of how much Turgeon valued his play. Lindo, meanwhile, played eight minutes and hit a 3-pointer, grabbed four rebounds and nabbed a steal.

“I’d like to be a little bit deeper team. I keep saying that,” Turgeon said. “Hakim Hart gave us good minutes tonight, he’s feeling a little bit more comfortable, [and] made a three, which is good. And Ricky Lindo’s minutes were terrific.”

So often, it’s easy to get caught up in the matchup between the superstars, especially when four of the Big Ten’s best players are split two per side.

That was the scenario heading into Saturday night’s tilt. But as those two duos essentially broke even in scoring, Michigan State’s role players came to the forefront, and Maryland’s failed to match them.

“Their two superstars are really good players, you know, Cowan and Smith,” Spartans coach Tom Izzo said. “Some of their other guys missed some shots that I think they normally hit.”