With 78-67 loss to Rutgers, No. 9 Maryland men’s basketball misses another chance at title 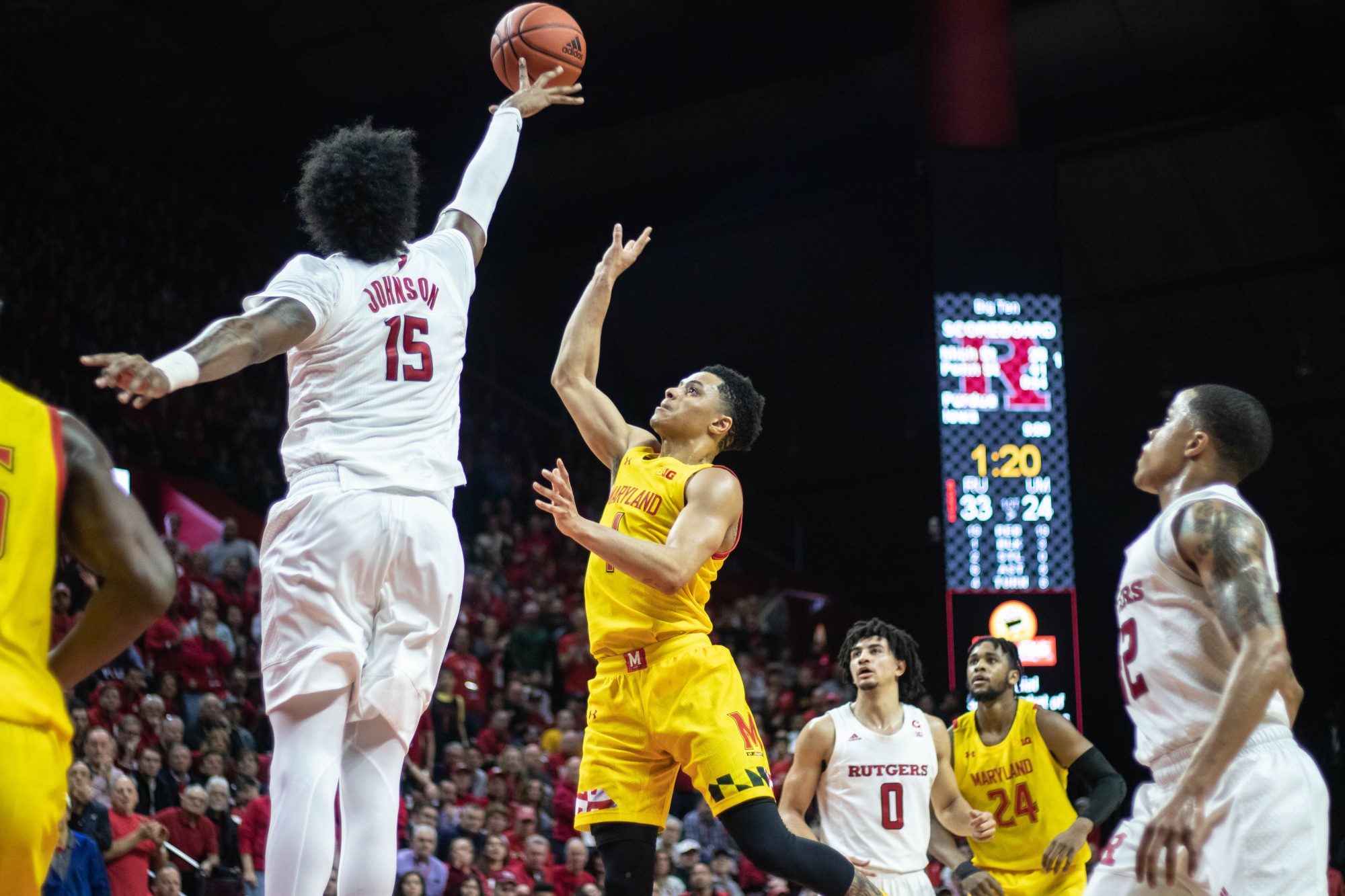 PISCATAWAY, N.J. — Early in the second half, Rutgers men’s basketball forward Akwasi Yeboah stepped into a three-point attempt and watched it swish through the net. As he backpedaled to the defensive end of the floor, Yeboah blew his pointer finger, mimicking cooling off a gun.

That motion didn’t cool off the Scarlet Knights, though. Rutgers shot 17-for-30 in the second half to build and maintain a comfortable double-digit lead over Maryland.

The No. 9 Terps, however, never had any reason to cool themselves off, as a cold-shooting night persisted throughout the 40-minute affair. Maryland finished the game 6-for-32 from beyond the three-point line and squandered a second consecutive chance to clinch at least a share of the Big Ten title, falling 78-67 on Tuesday night.

“We haven’t made shots all year. … But tonight, we let it affect our transition defense,” coach Mark Turgeon said. “It can’t weigh on us. We gotta miss a shot, we better run our ass back and play some defense, and we didn’t do that today.”

[Read more: Maryland men’s basketball knows “what everybody wants.” It knows how to get there, too.]

Guard Eric Ayala rose up from three on Maryland’s first possession, but Rutgers guard Geo Baker swatted his attempt out of bounds. The Terps retained possession, and the inbound play ended with a Donta Scott three-point attempt that clanged off the rim.

Two offensive trips later, guard Anthony Cowan saw his 3-pointer go awry — his 16th consecutive miss from beyond the arc, dating back to Maryland’s 76-67 win over Northwestern on Feb. 18.

Cowan momentarily broke out of his shooting slump to nail the Terps’ first trey of the night and give Maryland an early 4-2 lead. But the outside shooting success was fleeting — both for Cowan and coach Mark Turgeon’s team as a whole.

Maryland missed its next 11 attempts from the outside. But that didn’t deter the Terps from continuing to let it fly, including a stretch of five straight shots from deep that all ended in misses.

During that stretch of deep-shooting deficiencies, nobody donning the Terps’ gold uniform could find the range.

Cowan and Ayala combined to miss four in that stretch. Forwards Donta Scott and Jalen Smith misfired on their combined three tries. And while little-used freshman guard Hakim Hart didn’t shy away from taking three attempts, he suffered the same fate as his teammates.

As Maryland’s shooting struggles persisted, Rutgers built an 11-point lead on the strength of its efficient shooting. The Scarlet Knights made 4-of-8 attempts from beyond the arc in the first half, including three from reserve guard Jacob Young, who scored 11 points before the break.

“We had a lot of great shots, a lot of open looks,” forward Jalen Smith said. “Just wasn’t falling for us tonight. The ball didn’t bounce our way, and Rutgers capitalized on that.”

Ayala finally put an end to the Terps’ cold stretch from deep, hitting a triple from the top of the key with 40 seconds to play in the half.

Maryland found itself trailing 35-29 at halftime, despite shooting 11-for-16 from two-point range. The issue was the Terps’ over-reliance on the outside shot, an area they struggled mightily.

Rutgers continued to outshoot Turgeon’s squad after halftime — hitting nine of its first 12 shots, including 3-of-4 from beyond the arc to build a 17-point lead, the third consecutive game the Terps found themselves in a deficit that large.

“We had a layup for [Jalen Smith] to cut it to four, and then we had a wide-open three by Anthony,” Turgeon said. “We don’t make those shots. They go down and make them, so then the game gets away from us.”

With three minutes to play, Turgeon surrendered and emptied the reverses onto the floor. By that point, Maryland had already heard the “overrated” and “start the busses” chants from the contingent of students inside the Rutgers Athletic Center.

Those same students rushed the floor to celebrate the Scarlet Knights’ victory — the second time this season the Terps had to navigate around a mass of students to their locker room, with the Penn State loss being the other.

Maryland controlled its own destiny to win the conference and secure the top seed in the Big Ten tournament. Now, the Terps find themselves tied with Michigan State for the top spot, and their conference tournament seeding hinges on Sunday’s regular-season finale, along with other results outside of their control.

“We understand what’s at stake,” Cowan said. “Obviously, today didn’t go how we wanted it to. But it’s on to the next one now.”