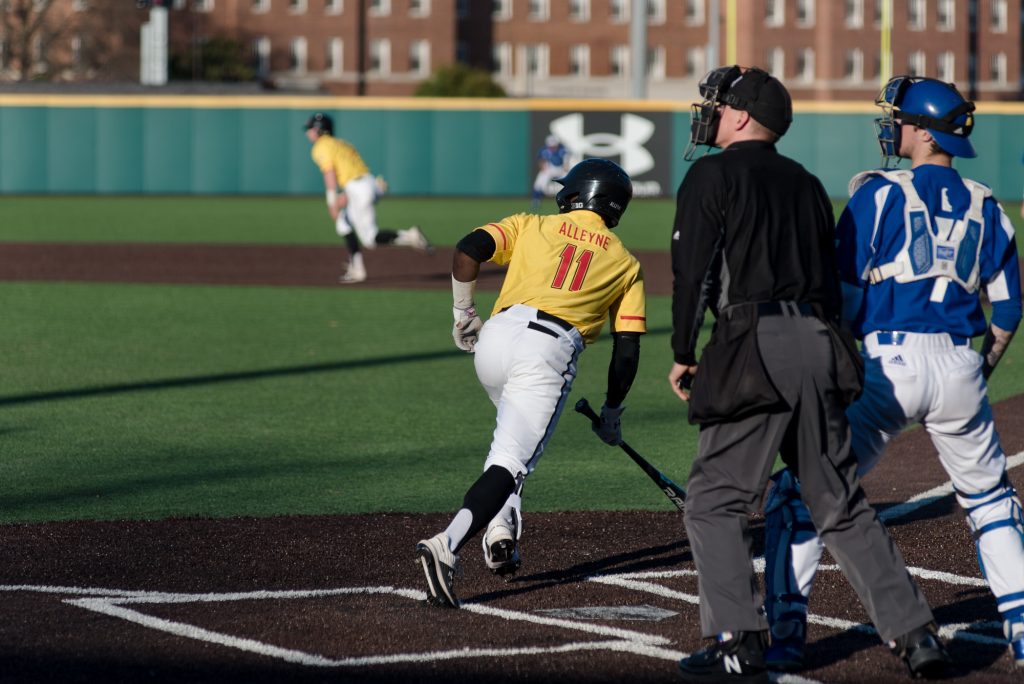 Center fielder Chris Alleyne runs out of the batter's box after a hit during Maryland baseball's 13-6 win over Delaware on March 4, 2020. (Gabby Baniqued/The Diamondback)

With the tying run on third and two outs, Sean Heine had to work out of a fifth-inning jam. The Maryland baseball right-hander fired a first-pitch fastball to Delaware third baseman Joey Loynd, who chopped it weakly toward third.

Freshman Matt Orlando — getting the start at third base over the ailing Tommy Gardiner — charged at the slow-roller, picked it up and fired to first to nab the speedy Loynd and keep the Terps up one.

Then, Ben Cowles built off the impressive defensive play. The shortstop clubbed a 2-2 pitch to lead off the bottom of the frame, giving Maryland insurance.

The sequence snapped the Terps’ cold spell, which had let Delaware cut a six-run deficit down to one. Maryland rode that momentum — along with Cowles’ five RBIs — to a 13-6 win over the Blue Hens on Wednesday in College Park.

“Offensively, we competed pretty hard,” coach Rob Vaughn said. “We didn’t give a lot of outs away.”

After a weekend sweep at the hands of Coastal Carolina, the Terps looked to get off to a fast start against the Blue Hens. They got that from right-hander Zach Thompson, who retired the first three Delaware hitters on six pitches — all strikes — to give way to the Terps’ offense.

Chris Alleyne led off with a popup to right field that fell between three Blue Hens, allowing the Terps’ center fielder to reach second. He scored two batters later on Maxwell Costes’ single RBI single up the middle.

Maryland (7-4) tacked on another run in the second inning against Delaware left-hander CJ Schaible, as Randy Bednar drove in Cowles with two outs.

And after another perfect inning from Thompson, Maryland seemingly broke the game open. Tavan Shahidi drilled the first pitch he saw over the left-center field wall for his first home run as a Terp. Later with two runners on, Cowles roped a double to left field, putting Maryland up 5-0.

The Terps plated their sixth run of the day three batters after right-hander Winston Allen plunked consecutive hitters. In three innings Wednesday, the Terps had scored more runs than they did in the entirety of their three-game sweep to Coastal Carolina.

While the Terps had spotted Thompson a six-run lead, that would not last as the Blue Hens (4-7) began to chip away in the fourth. The redshirt junior walked Vinny Vaccone to lead off the frame, and Delaware’s shortstop came around to score two batters later on an RBI groundout.

And with two outs, the Blue Hens cut into the lead even more. They loaded the bases for Aidan Riley, who blooped a single to center field that scored two runs. Thompson got Austin Colmery to ground out and end the inning, but Delaware kept clawing back in the fifth.

Two runners reached with one out, and Thompson’s afternoon was over. The right-hander allowed five earned runs and three hits in 4 ⅓ innings while striking out three and walking three.

“When you sit down for a little while, it’s tough,” Vaughn said, referencing Maryland’s 10-batter third inning. “[His pitches] just kind of flattened out a little bit, and then when it flattened out, he didn’t have the same command of all his stuff.”

Heine took over and two more runs quickly scored, including one on a booming double from first baseman Joseph Carpenter. But Orlando’s sterling defense saved the Terps from a complete collapse, and Cowles put Maryland back up two with a laser over the left-center field wall.

“We can’t change anything just because they scored five runs,” said Alleyne, who had four hits. “We just have to keep our foot on the gas.”

Heine settled down in the sixth, posting a scoreless frame. He was rewarded in the bottom of the inning, as the Terps extended their lead once again. Troy Schreffler and Orlando reached scoring position with no outs, and they came around to score on back-to-back sacrifice flys from Cowles and Chavis, respectively.

Blue Hens right fielder Kyle Baker stroked a leadoff home run in the seventh to cut Maryland’s lead to 9-6, giving Delaware some more life after their previous rally fell short. But right-hander Connor Staine worked around the blast, and the Terps broke it open once again in the bottom of the inning.

Maryland restored its six-run lead on a series of walks and wild pitches, and another wild pitch in the eighth plated Alleyne to put the Terps up 13-6. Elliot Zoellner then sealed the game for Maryland, getting Jack Goan to ground out and giving the Terps a bounce-back victory after a poor weekend.

“We hit the ball well, swung at the pitches we should be swinging at and stayed true to our approach,” Cowles said.