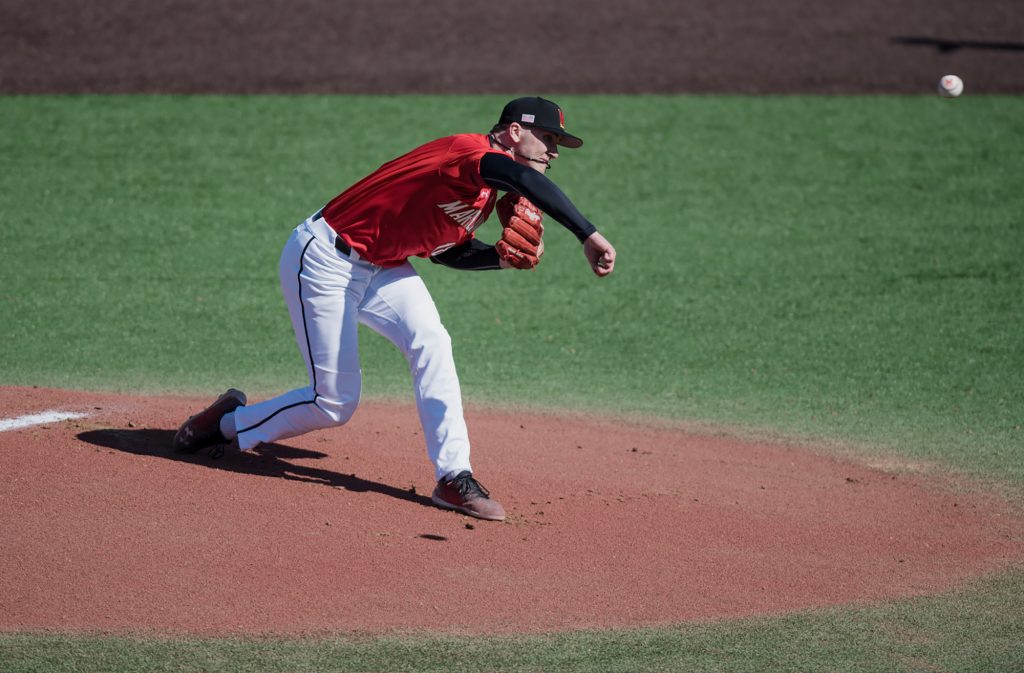 Heading into the bottom of the eighth inning Saturday against Coastal Carolina, Maryland baseball began to build momentum. After scuffling at the plate for most of the game, the Terps tacked on two runs in the top of the frame and looked to complete the comeback in the ninth.

But they never got there. Shortstop Ben Cowles fielded a leadoff grounder but made a poor throw, allowing the Chanticleers to put a runner on second with no outs. They would score four in the inning and put Maryland away en route to a 10-3 win.

For the Terps and coach Rob Vaughn, the sequence was emblematic of the three-game sweep. Facing a top-tier opponent, costly mistakes offered Coastal Carolina ample opportunities — which it cashed in on — while a dominant opposing pitching staff ensured the Terps were opportunity-starved.

“That Coastal team just takes advantage of things you give them,” Vaughn said, “and we just gave them too much.”

On the weekend, the Terps (6-4) allowed 34 hits and 19 walks while committing five errors. They had allowed 23 runs entering the series, but gave up 29 in three games to a Chanticleers offense averaging around 6.9 runs per game heading into the homestand.

Maryland also gave up 14 stolen bases, nearly triple the amount it allowed in its first seven games combined. Much of that was due to Coastal Carolina testing catcher Tavan Shahidi, who made just his second and third career starts for the Terps after regular backstop Justin Vought tweaked his hip and had to leave Friday’s game.

Against a team like the Chanticleers (7-3), Vaughn knows that combination of mistakes will produce poor results for his team.

“You give guys stuff for free, then one hit can turn into a crooked number,” he said.

The Chanticleers’ pitching staff racked up 32 strikeouts while frequently working ahead of a disciplined Maryland lineup. Coastal Carolina’s arms walked 10 batters and relied on a mix of overpowering stuff — including a fastball from closer Chase Antle that touched 99 mph — to keep the Terps off-balance.

“That is no question the best pitching staff I’ve seen them have, and that’s including their [2016] national championship team,” Vaughn said. “When those guys came in, there wasn’t a lot for free.”

With the Chanticleers controlling the strike zone and getting ahead, Maryland’s hitters were frequently forced to battle at the plate, peppering off pitches to stay alive. It’s that facet the Terps hope to avoid most in the following weeks.

“We’re at our best when we’re seeing our pitches and not their pitches, just owning the zone and doing the things that we can control,” right fielder Randy Bednar said. “So we just have to stick to that gameplan.”

While Maryland’s offense sputtered, the team felt more comfortable against Coastal Carolina’s arms as the weekend progressed. On Sunday in particular, Vaughn’s squad managed six hits — the most during the three-game set. And while only two runs manifested from those knocks, the Terps strung together quality at-bats.

It still resulted in a loss, the third one in a row. But it’s a silver lining they feel can lead to more positive outcomes in the future.

“I think hits will start to fall, so if we just keep working on our approach offensively, good things will start to happen,” right-hander Sean Burke said.

For Vaughn, seeing his team battle Sunday gives him confidence that it can hang with teams like the Chanticleers down the road.

“[Sunday’s] game is what all three games in that series should have looked like,” Vaughn said.