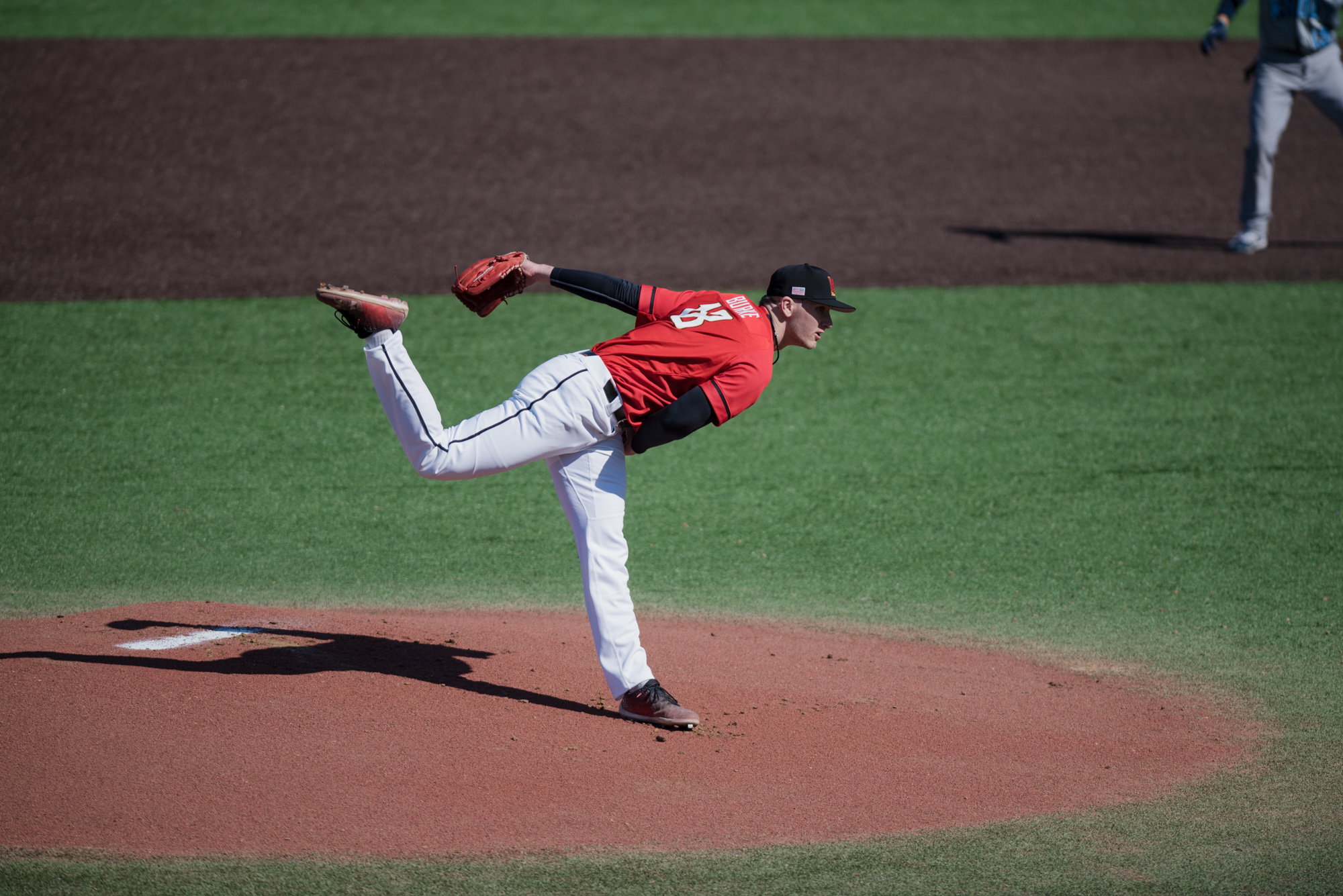 Maryland baseball right-hander Connor Staine found himself in a jam. In a tie game in the eighth inning, Coastal Carolina had put two runners on with two outs for Cooper Weiss, who entered the at-bat hitting .500 with runners in scoring position.

Coach Rob Vaughn trusted his freshman, who worked Weiss to a 2-2 count. But the Chanticleers’ third baseman won the battle, sending a single through the middle to give Coastal Carolina a one-run lead.

That was the difference-maker Sunday in Conway, South Carolina, as the Chanticleers completed a weekend sweep with a 3-2 win over the Terps.

Much like Saturday, Coastal Carolina (7-3) jumped out to an early lead. After right-hander Nick Parker struck out Maryland’s first three batters, shortstop Scott McKeon led off the bottom of the first with a solo home run to left field.

But Terps’ right-hander Sean Burke didn’t let the early mistake get to him, as he struck out the next three Chanticleers to close the frame.

“I threw him a middle-middle fastball in a fastball count that couldn’t have been a better pitch for him to hit out,” Burke said. “So it was just shaking that and getting back to the pitch plan, just taking it one pitch at a time.”

“It’s a really easy time to say, ‘Here we go again,’ and have a tough game and let things snowball,” Vaughn said. “Burke did the exact opposite of that.”

And after a clean second inning, Maryland’s offense gave the redshirt freshman some run support.

The Terps (6-4) put runners on the corners, and with one out, center fielder Chris Alleyne poked an RBI single through the right side to tie the game at one.

Two batters later, right fielder Randy Bednar stepped to the plate with two outs and two runners in scoring position. The right fielder — Maryland’s RBI leader — had a chance to put the Terps in front for the first time all weekend. But Parker struck him out and kept the game even.

Neither team could break through in the next two innings, though Coastal Carolina came close in the fifth. Makenzie Pate worked a two-out walk and advanced to third on a stolen base and throwing error by Maryland catcher Tavan Shahidi. That set up McKeon, who took Burke deep in the first frame.

But Burke struck out the shortstop to end the threat, and the Terps’ offense came alive in the sixth.

Maryland put runners on the corners with no outs for Bednar, who had a chance to avenge his strikeout in the third. The junior did just that, singling up the middle to give the Terps their first lead of the weekend and knocking Parker out of the game.

“I try to not think about past at-bats at all,” Bednar said. “So when I’m able to do that, I just focus in the moment and take care of the things I’m supposed to be doing.”’

In five-plus innings, the sophomore right-hander allowed two runs — only one of which was earned — and five hits while striking out seven and walking one.

Right-hander Shaddon Peavyhouse entered for the Chanticleers and calmed Maryland’s bats. With runners on the corners and no outs, he struck out designated hitter Maxwell Costes on a full count and got Shahidi to ground into an inning-ending double play.

The Terps held a narrow lead, but Coastal Carolina clawed right back.

Burke walked right fielder Nick Lucky to lead off the bottom of the sixth, and Lucky advanced to third on a stolen base and a wild pitch. With one out, first baseman Fox Leum poked a single to right field, plating Lucky and tying the game.

Burke got the next two hitters out, ending his day after 103 pitches. In six strong innings, the right-hander allowed two earned runs and three hits while striking out eight and walking three.

“I liked how much belief he had in his fastball today,” Vaughn said. “He did a really good job of keeping a simple pitch plan and executing that, and he did everything he needed to do to give us a chance to win today.”

Peavyhouse kept Maryland off the scoreboard in the seventh and eighth innings, and Staine was cruising for the Terps until there were two outs in the eighth.

Leum singled and Eric Brown worked a full count walk, setting up Weiss. The third baseman came through, drilling a single up the middle to put the Chanticleers back in front by one.

Coastal Carolina would hold on to that lead for good, as closer Chase Antle got first baseman Michael Pineiro to ground into a game-ending double play. It was the dagger in a poor offensive weekend for the Terps, who scored five runs in three games and punctuated the series with 12 strikeouts in Sunday’s game.