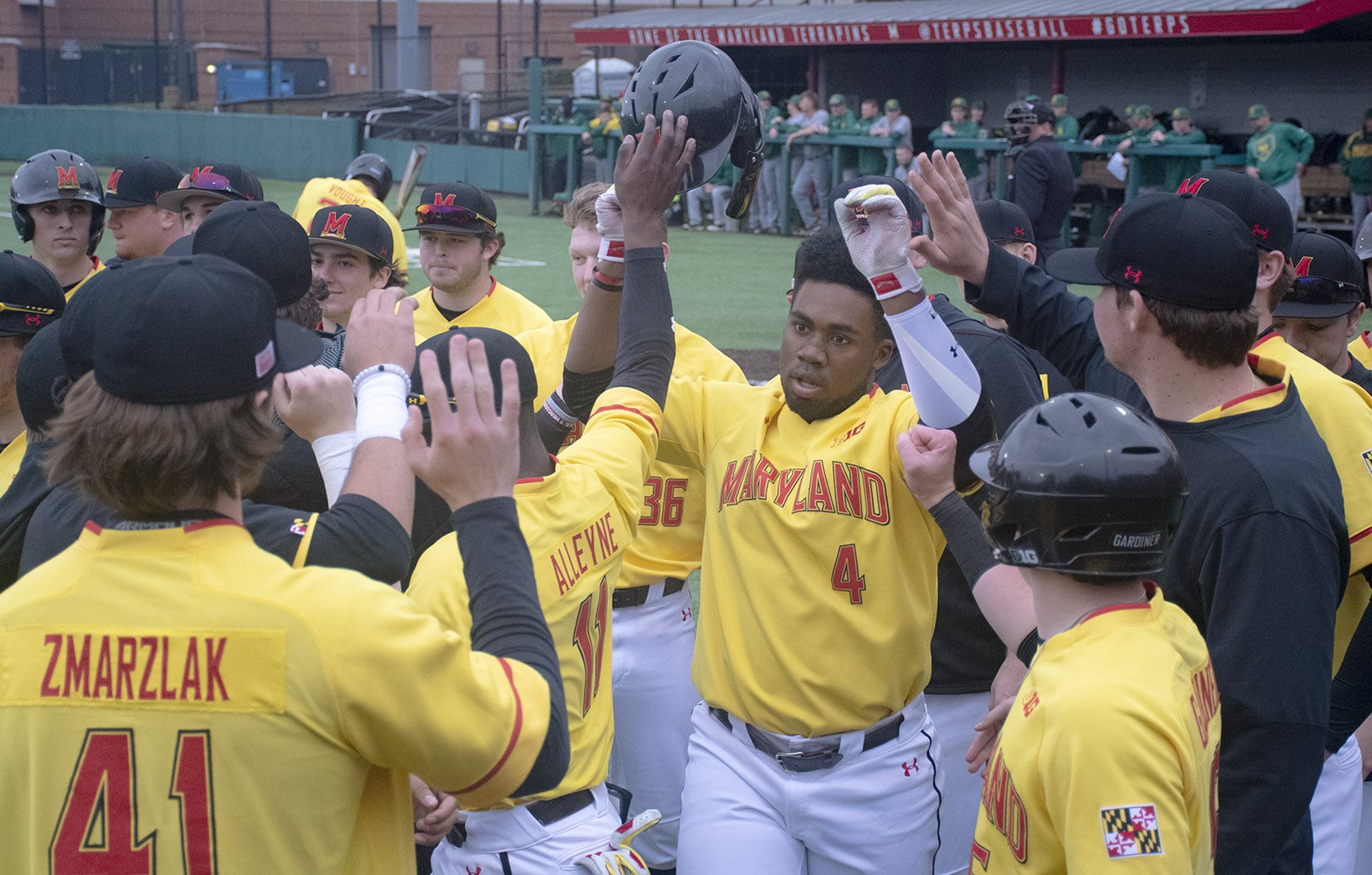 First baseman Maxwell Costes high-fives teammates on his way back to the dugout during Maryland baseball's 13-3 win over George Mason on Feb. 25, 2020. (Susannah Outhier/The Diamondback)

Justin Vought stepped to the plate against right-hander Stuart Barrett with two outs in the bottom of the sixth inning and a chance to come up clutch. A winless George Mason team had tied the game at three in the top of the inning, but Maryland baseball responded by loading the bases for its catcher.

Vought stayed patient, working a 3-1 count. And when Barrett fired a fastball low and outside on the subsequent pitch, second baseman Austin Chavis trotted home to put the Terps back in front for good.

That two-out rally spurred a streak of 10 unanswered runs from Maryland — due in large part to a bevy of walks — which put away George Mason late in a 13-3 win Tuesday.

The Terps’ defense has been a point of concern for coach Rob Vaughn, as the unit committed 10 errors in its first six games. The struggles continued early, as Maryland (6-1) made two more mistakes, including a booted grounder by first baseman Maxwell Costes in the second inning.

But Costes would atone for his gaffe in the bottom of the inning, launching a leadoff home run off Patriots’ left-hander Nate Young for his third blast in the past two games.

“[Assistant coach Matt] Swope tells us all the time to separate our offense from our defense,” Costes said. “So I tried not to carry anything that happened in the field to the plate.”

The sophomore finished with his second consecutive three-hit game.

The Maryland offense would strike again in the third. Young walked center fielder Chris Alleyne and left fielder Tucker Flint with two outs, bringing right fielder Randy Bednar to the plate. The Terps’ RBI leader poked a 0-1 breaking ball to left field for a single, driving in Alleyne and giving Maryland a 2-0 lead.

Those runs gave Zach Thompson enough room to work. The junior right-hander, making his first start this season after working as the Terps’ Saturday starter last year, worked quickly in the early part of the game. He tossed 3 ⅓ hitless innings on 33 pitches before designated hitter Lyle Miller-Green broke through with a double down the third-base line in the fourth inning.

Miller-Green scored two batters later on right fielder Bailey Klein’s seeing-eye single through the right side, cutting the Patriots’ deficit in half. Thompson then loaded the bases, but he induced a whiff from catcher Jake Manderson on an 0-2 curveball to get out of the jam.

Maryland regained its two-run lead in the bottom of the fourth. The Terps loaded the bases against Young, and the left-hander plunked Flint to bring in Maryland’s third run of the afternoon.

Junior right-hander Austin Cabone replaced Young in the bottom of the fifth and worked out of a two-on, one-out jam, and right-hander Trevor LaBonte trotted out of the Terps’ bullpen to face the middle of George Mason’s order. LaBonte relieved Thompson, who tossed five innings of four-hit, one-run ball while striking out two and walking one.

“He just trusted his stuff, trusted his preparation, was very focused and hooked in,” Vaughn said. “Thompson coming out and doing what he did kind of saves you and gives you a chance to get your feet underneath you.”

LaBonte got the next two Patriots out but walked Manderson, and Vaughn made the call to the bullpen for right-hander Elliot Zoellner. The sidewinding senior fell behind 3-0 to Corey Leadenham before working back to strike out George Mason’s third baseman to end the inning.

With the game even, Maryland’s offense went to work.

Chavis worked a leadoff walk, and Bednar singled up the middle with two outs to set up the middle of the Terps’ order against Barrett. The right-hander issued three straight walks to Costes, Vought and designated hitter Troy Schreffler — and just like that, Maryland recovered its two-run edge.

Zoellner worked a clean top of the seventh, and the Terps’ bats continued to mash in the bottom of the inning. With a runner on, Bednar crushed a 2-0 curveball out of the park to break the game open and put Maryland ahead 8-3.

The Terps added five more in the eighth as the Patriots’ pitchers continued to struggle with their command. They issued 14 walks and hit four batters on the game.

Maryland’s bullpen, meanwhile, shut down George Mason. Zoellner and Mark DiLuia combined to throw 3 ⅓ scoreless innings to end the game, and the Terps closed their four-game homestand on a high note.

Despite the win, Vaughn was displeased with his team’s sloppy play, singling out his team’s two errors and 15 runners left on base.

“That score is fool’s gold a little bit for me,” Vaughn said. “When you leave the bases loaded three times, you should lose.”

Still, he is confident they will bounce back.

“We’re far from a finished product,” Vaughn said, “but I like the way this group works.”