With two starts under his belt, Sean Burke has shown command early for Maryland baseball 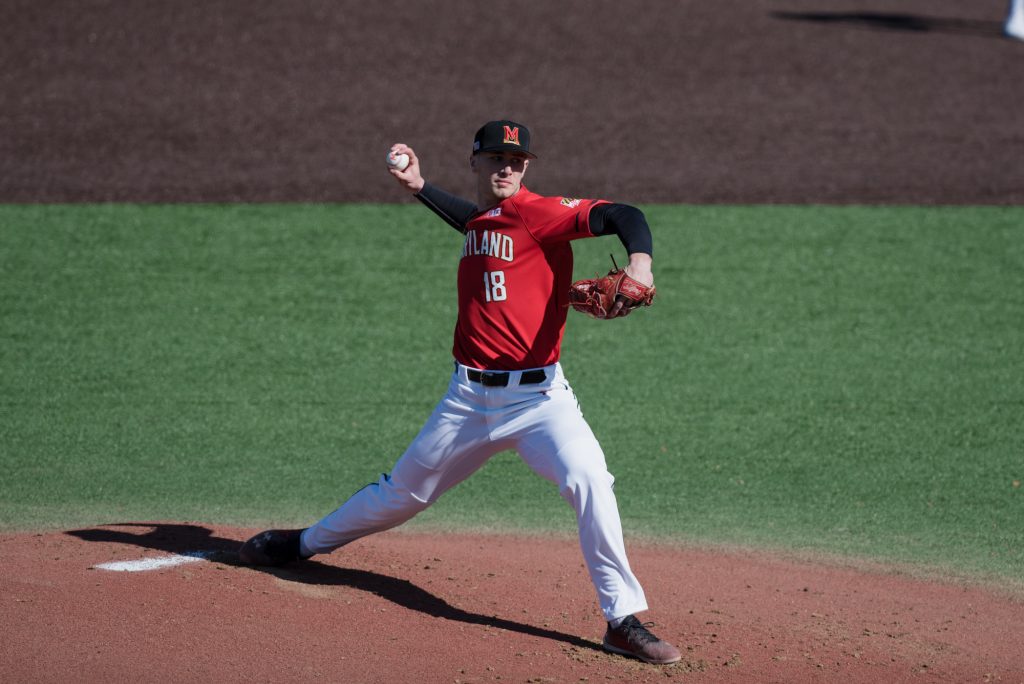 Maryland right-hander Sean Burke was cruising Sunday against Rhode Island. It was his second start of the season and he’d allowed just one hit and eight strikeouts through the first 4 ⅓ innings. But against the bottom of the Rams’ lineup in the fifth, he began to struggle.

Burke surrendered a one-out single and a walk, prompting a visit to the mound from pitching coach Corey Muscara — and a simple message.

“He talked about believing in one pitch, and taking it one pitch at a time,” Burke said.

The redshirt freshman heeded that advice. And with the Terps clinging to a 2-0 lead, Burke used his overpowering fastball to get third baseman Tino Salgado to ground into a double play. Burke was later pulled in the sixth inning, but not before turning in his second straight strong start and buoying Maryland to a series-clinching shutout.

After the Terps’ offense exploded for 17 runs over the first two games of the series, their bats quieted Sunday. Much like in Burke’s first start, he had to pitch without much run support. This time, it was against a lineup that had already proven it could stuff the stat sheet — the Rams scored 11 runs Saturday against Maryland’s pitching, more than the team had given up combined in its first four games.

But Burke was unfazed, and his sharp performance lifted the rest of the lineup.

“He kept us in the game and gave us confidence,” said Maxwell Costes, who hit two solo home runs Sunday. “We had somebody on the mound going for us that was going to keep us in the game, and it was our job to help him out, too.”

In his early appearances, the right-hander relied on an electric fastball — which sits in the low 90s and can touch 95 mph — to stay ahead of hitters. The heater impressed coach Rob Vaughn.

“His fastball’s just got ride, it’s got everything that every coach wants on it,” Vaughn said.

Burke said his main plan has been to mix in a curveball to supplement the fastball and keep hitters off balance. He’s working to develop tertiary pitches to complement his arsenal, and he said he tested out a change-up against the Rams.

That pitch, along with a cutter, will become useful for Burke as the season progresses.

“Trying to go through the lineup with one or two pitches the first time around is going to create problems for them later on,” Burke said. “That’s when I’ll start to throw the [curveball and the change-up], especially toward the end of the game.”

While the fastball-curveball combination has helped Burke register a 0.84 ERA and compile a team-leading 16 strikeouts, Vaughn knows there will be tougher outings in the future.

And the coach said that could be good for his young arm.

As the Terps look to finalize their starting rotation in the coming weeks, Vaughn remains impressed. The redshirt freshman is in a prime position to secure a starting spot for good, potentially continuing to see action in pivotal Sunday games.

“On Sunday, you’ve got to set the tone, and it starts on the mound,” Vaughn said. “He did an unbelievable job.”