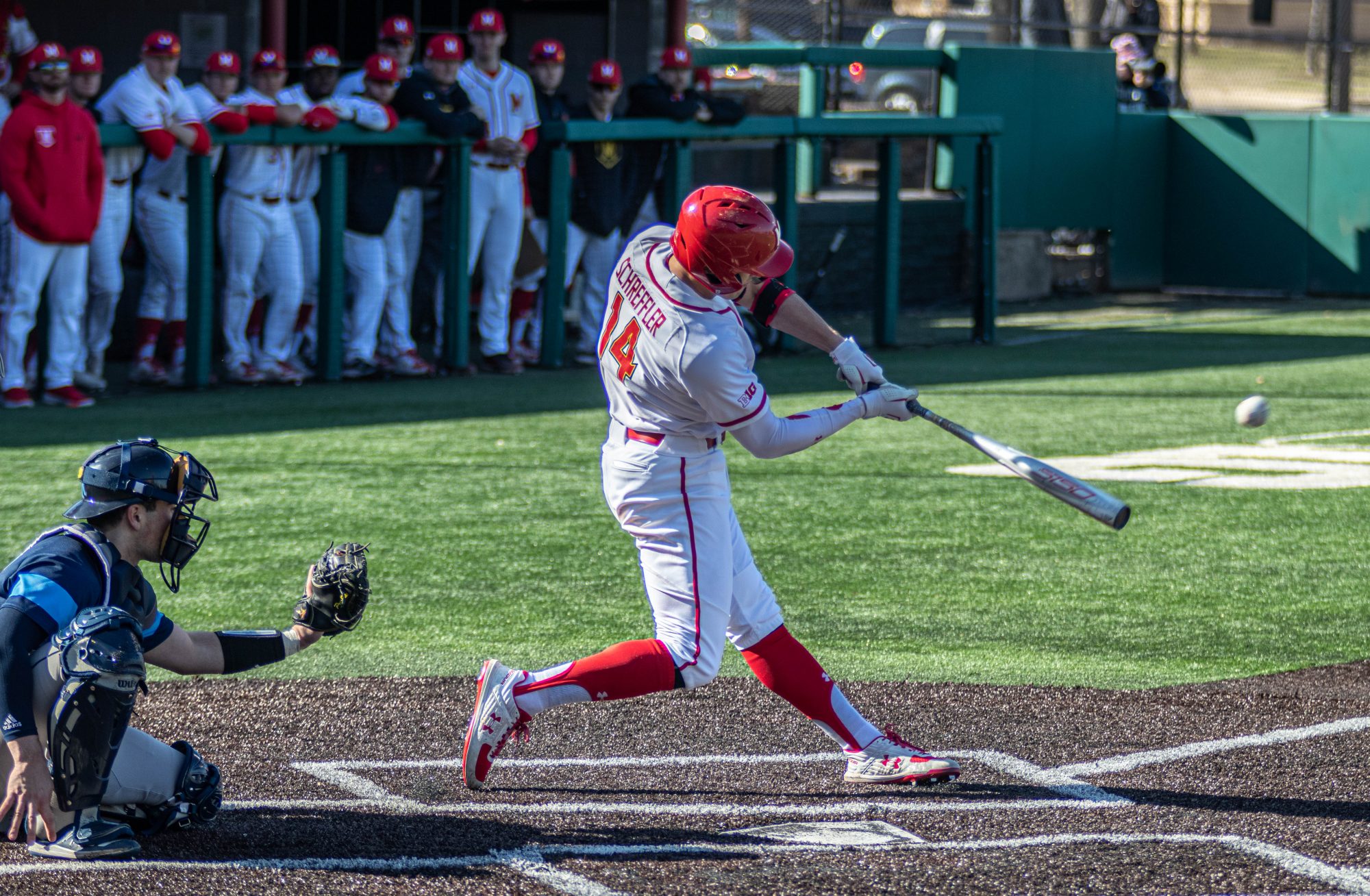 In Maryland baseball’s first four games, the team won despite its defense. The Terps had committed eight errors but outscored their opponents 32-9. But Saturday afternoon in College Park, their sloppiness came back to hurt them.

Maryland made three more errors, none more costly than when Troy Schreffler misplayed a line drive that allowed the go-ahead run to score in the seventh. The miscue allowed Rhode Island to take control of a back-and-forth game, and the Rams ultimately won 11-8.

The Rams’ offense scuffled Friday, but they got off to a quick start Saturday. In the first inning on a 1-1 count, designated hitter Jackson Coutts sent a Nick Dean fastball over the left-center field wall to put the Rams up 1-0.

Rhode Island’s lead would only last a few minutes, though, as first baseman Maxwell Costes drove in center fielder Chris Alleyne with a single up the middle to tie the game in the bottom of the inning.

And with one out in the second, the Terps would hit a longball of their own. Second baseman Benjamin Cowles drove a 2-2 pitch from right-hander Nick Robinson over the high wall in center field to put Maryland up 2-1, the team’s first home run this season.

But Dean ran into trouble with one out in the third inning, loading the bases. Whereas Dean worked out of jams like this in his first start last week, Rhode Island (2-3) capitalized.

Coutts drilled a two-run double down the right field line to put the Rams back on top. One batter later, first baseman Xavier Vargas crushed a three-run homer to right, giving Rhode Island a 6-2 lead.

Dean would come back and work a scoreless fourth inning, and with Maryland (4-1) facing its largest deficit of the season so far, it began to chip away.

Freshman third baseman Matt Orlando, making his collegiate debut, grounded in a run for his first RBI. One batter later, Austin Chavis laid down a squeeze bunt to bring home Troy Schreffler, and Rhode Island’s lead was suddenly cut in half.

Dean recorded two outs in the fifth and would exit before he could face Coutts a third time. The freshman allowed six runs and four hits in 4 ⅔ innings while striking out five and walking two.

Left-hander Ryan Ramsey got the final out of the inning, and Maryland’s offense went back to work against Zach Fernandez. The right-hander relieved Robinson, who allowed four runs and three hits in four innings while striking out four and walking two.

With a runner on third and two out, Terps catcher Tavan Shahidi — making his first start — drove a double off the center-field wall, cutting the Rams’ lead to one. Two pitches later, Schreffler sat on a hanging curveball and sent it out of the park for Maryland’s second home run of the day.

The teams would continue to trade runs in the sixth inning. Second baseman Joe Fortin drilled a two-out RBI double off Ramsey to tie the game at seven.

But just as quickly as Rhode Island evened the score, Maryland took the lead. Chavis snuck a solo home run just past the reach of Rams center fielder Austin White to put the Terps up 8-7.

Just as it seemed like Maryland had grabbed the momentum, the pendulum swung back in Rhode Island’s favor, and disaster struck for the Terps.

Two runners reached against Sean Heine, but the sophomore right-hander got Coutts and Vargas out. With the Rams’ biggest threat seemingly vanquished, right fielder Mark Coley stepped to the plate.

He lined a first-pitch fastball right at Schreffler for a routine play. But the freshman left fielder dropped the ball, allowing two runs to score and Rhode Island to take a 9-8 lead.

It was a costly error, and the Terps wouldn’t recover.

Vargas added insurance with his second home run of the day in the ninth, a two-run shot to put the Rams up 11-8. And on the mound, right-hander Tyler Brosius shut down Maryland’s bats, sitting down nine of their final 12 hitters and ultimately getting Shahidi to ground out to seal Rhode Island’s second win of the season.