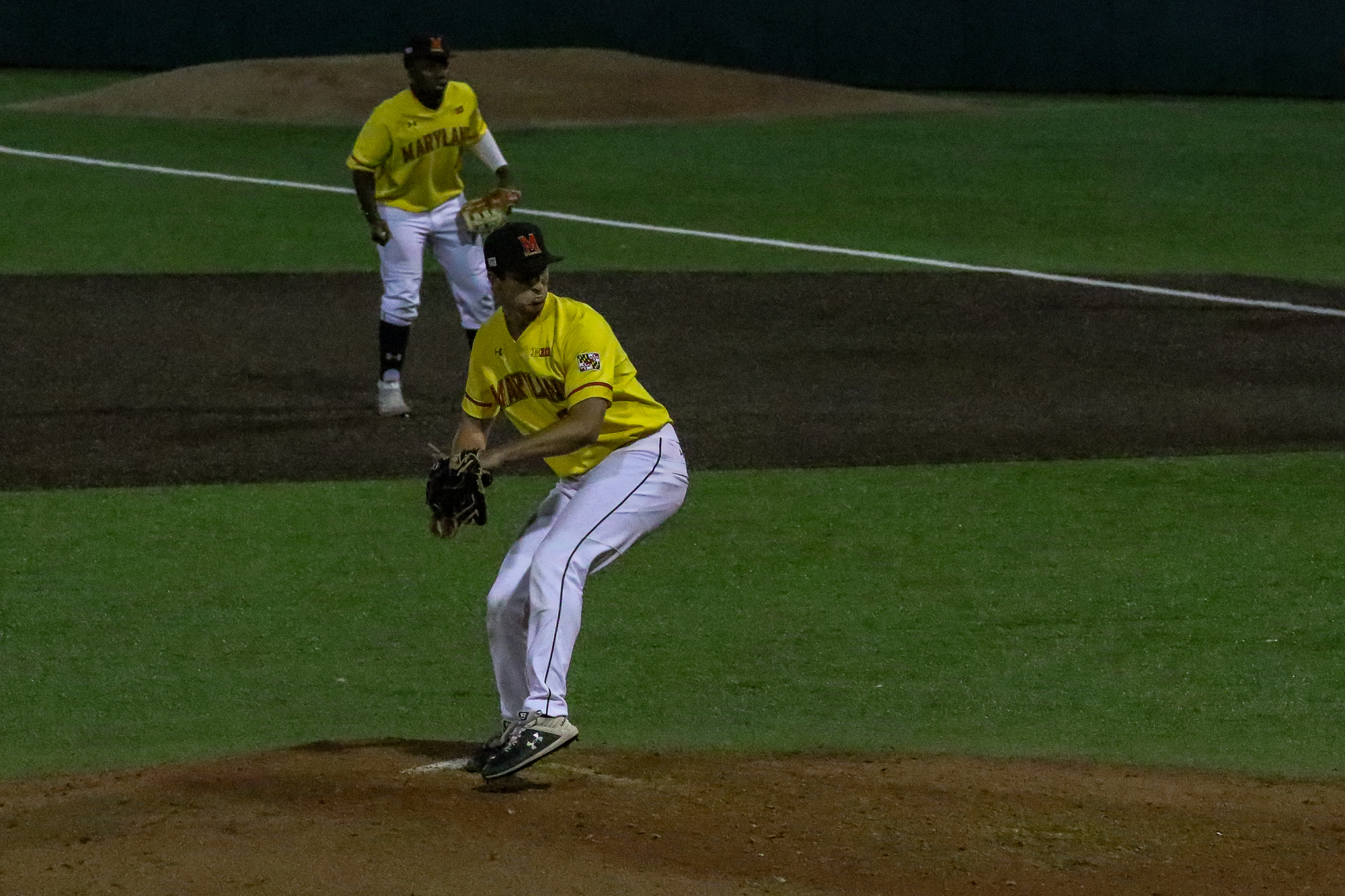 Right-hander Elliot Zoellner prepares to throw a pitch during Maryland baseball’s 8-4 win over Iowa at Bob “Turtle” Smith Stadium on May 17, 2019. (Ryan Romano/For The Diamondback)

With Maryland scuffling at the plate and trailing 2-0 against the College of Charleston entering the ninth inning on Sunday, coach Rob Vaughn didn’t feel any panic. In past years, the Terps might have let moments like that get too big for them. But this felt different.

“I felt this sense of confidence,” Vaughn said. “It was not if we were going to score, it was when and how many.”

He was right. Maryland tied the game in the ninth and won it in extra innings.

And that level of confidence — the one that only grew after Sunday’s 4-2 win — is something that’s made the team jell quickly despite its youth.

It comes from extensive preparation and a positive culture developed by the coaching staff, something right-hander Elliot Zoellner — one of the Terps’ two seniors — experienced firsthand.

“Everything seems to have fallen into place really well,” Zoellner said. “All the guys just seem like they’re really good friends, and I’m comfortable being around them at all times.”

Vaughn has also attributed that culture to the leadership of veterans such as juniors Randy Bednar and Sean Fisher, who helped set an example for the team to follow. Their work has played a part in building trust among the players and easing any nerves, he said.

And that has translated to results on the field. Maryland scored 23 runs and allowed only six in three games last weekend in South Carolina, leading to an undefeated record ahead of its series with Rhode Island (1-2) in College Park this weekend.

Picking up those early wins has only increased the team’s confidence, especially among the group’s large corps of freshmen.

“Going 3-0 is huge,” freshman designated hitter Tucker Flint said. “It makes us believe that we can beat anybody going forward.”

Vaughn knows tougher moments are ahead, and that the Terps’ response to challenges will ultimately determine their destiny.

Entering this weekend’s series against the Rams, Vaughn plans to keep the lineup and rotation very similar to last weekend, hoping to ride the momentum from a perfect weekend.

Fisher — who allowed two unearned runs and struck out five in 5 ⅓ innings in his first appearance against Charleston Southern — will start Friday, while freshmen Nick Dean and Sean Burke will be on the bump for the next two games. Vaughn said he may stretch their pitch counts a little further depending on how they’re performing and feeling.

But no matter the lineup, Maryland is going to carry its confidence forward, hoping to continue its season-opening hot streak.