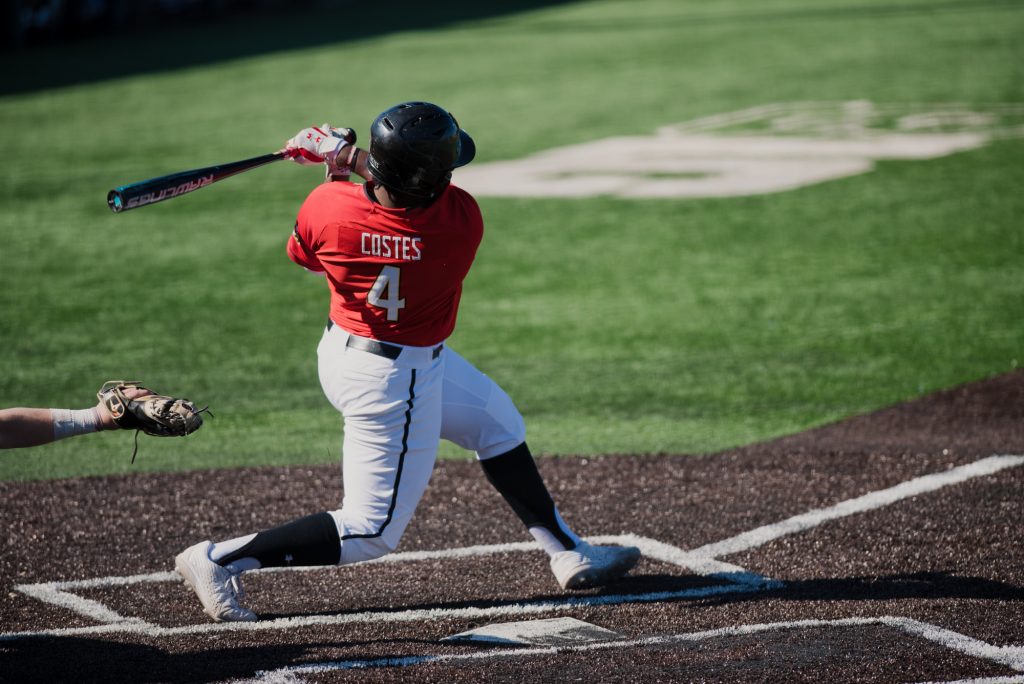 In its first loss of the season Saturday — one defined by sloppy play — Maryland baseball plagued itself with three errors, continuing a streak of committing at least one defensive miscue in each of its games this campaign.

On Sunday, the Terps bucked that trend, playing their first error-free game of the season as designated hitter Maxwell Costes blasted two home runs and right-hander Sean Burke struck out eight across 5 ⅔ shutout innings in a 3-0 series-clinching win over Rhode Island.

“You don’t have to play defense when we strike guys out,” coach Rob Vaughn said, also attributing the defensive improvement to increased reps in the field.

Maryland’s offense continued to stay hot in the early innings as it jumped on Rhode Island right-hander Vitaly Jangols in the first. Center fielder Chris Alleyne led off with a double, and after he advanced to third on a wild pitch, left fielder Tucker Flint brought him in on an RBI groundout to second base.

That provided enough insurance for Burke, who kept the Rams (2-4) behind for most of the afternoon with an overpowering fastball.

The redshirt freshman was sharp as he racked up six strikeouts in the first three innings and did not allow a hit the first time through the order.

Maryland (5-1) added to its lead with two outs in the third inning. Costes cranked a 2-2 breaking ball over the left-center field wall for his first home run of the season. The slugger had only three hits entering the game but doubled that with a complete performance.

“[Assistant coach Matt] Swope told me I’ve been swinging at good pitches and it’s going to come together at some point,” Costes said. “Today, it came together.”

“I haven’t loved his at-bats this year so far, but he’s still on base at like a .700 clip,” Vaughn said. “So if that’s what I consider not great, that tells you how good that kid is.”

The blast gave Burke a two-run cushion, and he continued to cruise through the fourth inning.

Burke faced one of his only real threats in the fifth, as he put two runners on with one out. But third baseman Tommy Gardiner saved Burke’s scoreless outing.

Third baseman Tino Salgado grounded a 2-2 pitch down the third base line, but Gardiner made a sliding stop to prevent a hit. He then stepped on third and gunned Salgado out at first to turn a double play and get out of the inning.

Gardiner led off the bottom of the inning with a single through the left side to pick up his seventh hit of the season. While the Rams would extinguish the threat with the help of a double play, the Terps chased Jangols. The senior allowed two runs and seven hits in 4 ⅔ innings while striking out four.

With his pitch count rising, Burke ran into more trouble in the sixth. Two runners reached with one out, and up to the plate stepped Rhode Island first baseman Xavier Vargas, who clubbed two home runs Saturday.

But Burke won the battle, getting Vargas to fly out to Alleyne. The right-hander was then pulled for right-hander Elliot Zoellner after giving up four hits in 5 ⅔ scoreless innings.

Burke said he had a similar gameplan to last week, working with a simple fastball-curveball combination to keep the Rams guessing. But he also credited much of his success to veteran catcher Justin Vought.

Zoellner got Mark Coley to fly out on a full count, and the Rams came up empty once again.

Right-hander Connor Staine came on in the seventh inning and continued to shut down Rhode Island. He allowed two hits and no runs while striking out two in 2 ⅔ innings.

The Rams’ bullpen was strong, too. The Terps had been hitless since Jangols departed, but Costes changed that with one swing in the eighth. The sophomore crushed his second home run of the afternoon, putting a first-pitch fastball from right-hander Sean Sposato on top of the Varsity Team House in left field to give Staine some breathing room. It was the Terps’ fifth blast in their past two games.

Rhode Island brought the tying run to the plate with two outs in the ninth, but right-hander Mark DiLuia struck out pinch hitter Thomas Summers on a full count to seal Maryland’s cleanest game of the season.

“You’re not going to go undefeated in a baseball season,” Costes said. “To see our guys come out here and bounce back after yesterday shows what type of character this team has.”