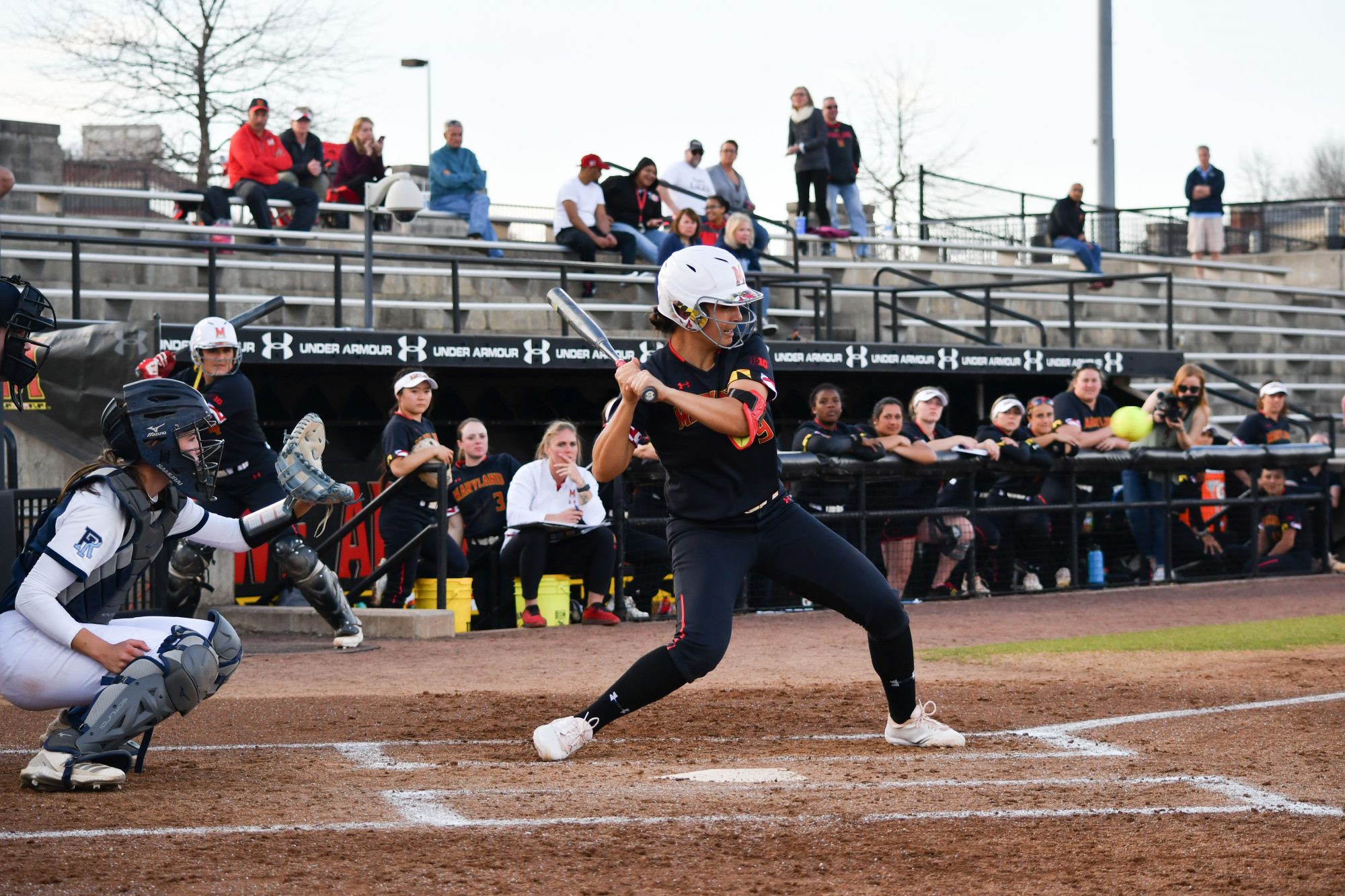 With runners on the corners, two outs and Maryland softball tied with Georgia Southern in the top of the seventh inning, infielder Anna Kufta fell into an 0-2 count.

The senior didn’t panic, though. She laced a single to right field to put the Terps in front — a lead they wouldn’t relinquish in the bottom half.

Alongside pitchers Trinity Schlotterbeck and Courtney Wyche allowing only four hits for the game, Maryland’s offense shone toward the end of the contest — eventually racking up 10 hits and four runs after a long stint at zero — en route to a 4-2 win over the Eagles on Sunday in the Eagle Round Robin.

“You’re seeing two freshmen, specifically Courtney Wyche and Trinity Schlotterbeck, growing out there on the field right now,” coach Mark Montgomery said. “They had some work to do and they’re starting to figure stuff out, and it shows.”

Behind the freshmen duo’s solid pitching, the Terps’ defense held firm, going without an error yet again.

“The last [four] games in a row we had zero errors, and our pitchers have cut down a great deal on the walks and are getting ahead in the counts,” Montgomery said.

After three well-pitched innings by both teams, Georgia Southern scored its first run of the day in the bottom of the third.

Outfielder Ellington Day walked and infielder Ashlynn Gunter singled to left-center. Outfielder Mekhia Freeman reached on a fielder’s choice, Gunter was thrown out at second and Day advanced to third. Freeman was caught stealing second and was tagged out in a rundown, but Day made it home in time, putting a run on the board before the out was made.

The Eagles came back in the same inning after Wyche took the mound for Schlotterbeck. Freeman walked and infielder Faith Shirley doubled down the left-field line to send Shirley home to tie the score at two. Wyche notched two consecutive strikeouts to get the Terps out of trouble in the bottom of the sixth.

And courtesy of Kufta’s timely hitting, the Terps regained their lead in the seventh. After outfielder Micaela Abbatine singled and stole second to put herself in scoring position, infielder Regan Kerr singled to advance her to third.

Kerr then stole second and advanced on a fielder’s choice that put Okada on first. Kufta’s RBI single to right field brought Kerr home, and infielder Taylor Liguori followed with an RBI single of her own.

Maryland took the game, 4-2, after strong pitching from Wyche in the seventh to secure the win.

The Terps won three of the four games they played during the Eagle Round Robin tournament and they allowed only six runs through the four games. Maryland is now 5-8 on the season and will head to Arizona State for the Sun Devil Classic next weekend.

“We went and played a couple of really good teams and got hit in the face and now they figured it out and they’re punching back,” Montgomery said. “It’s always been in us. Sometimes you have to get knocked down a few times to figure out how to ride that bike.”