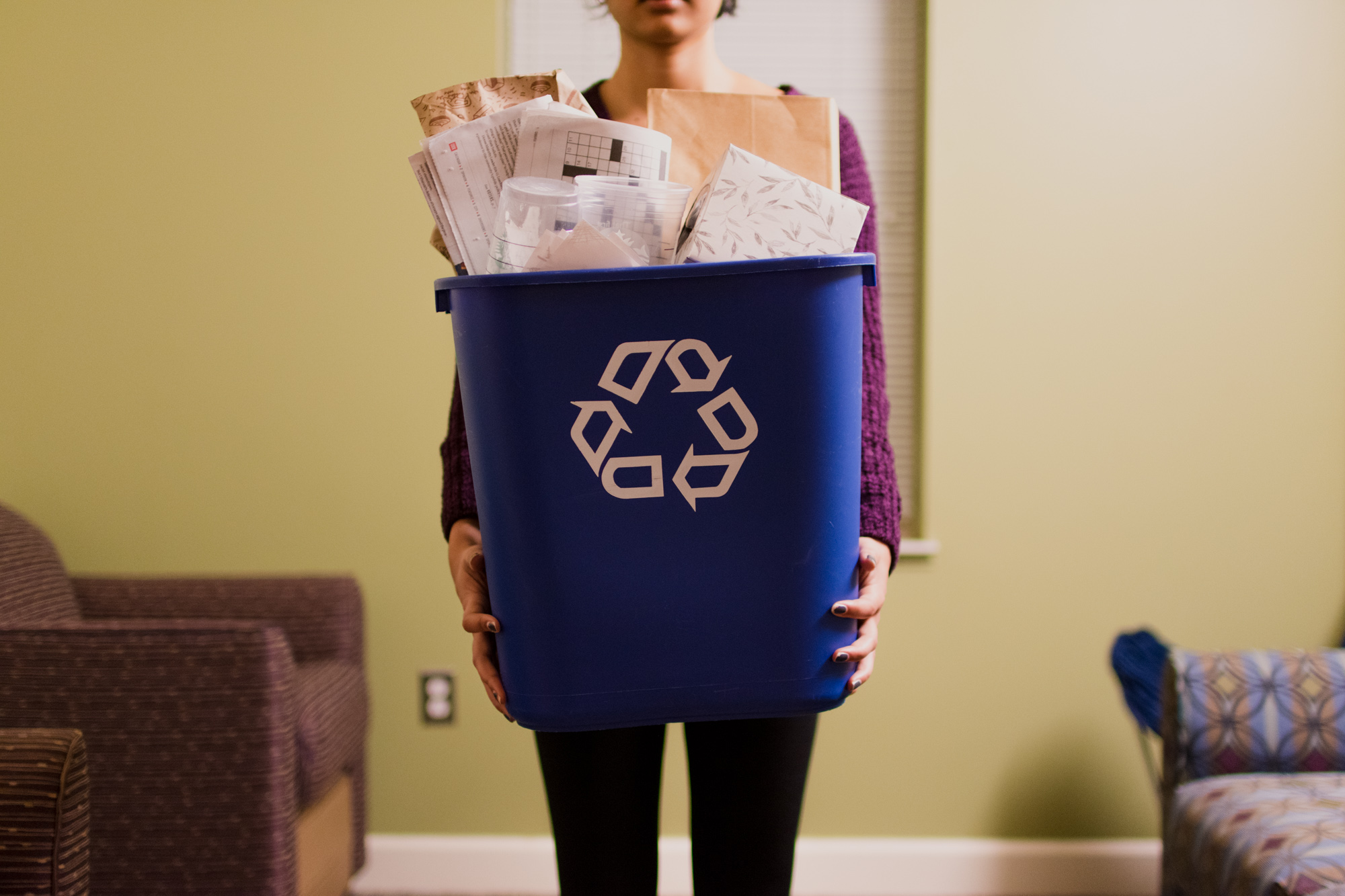 One of the recycling bins provided to residence halls of the South Hill Community. (Gabby Baniqued/The Diamondback)

The move came after a push from student activists prompted Dining Services to create their Ocean Friendly Campus initiative, which aimed to remove most single-use disposable plastics in Dining Services’ stores and cafes.

“When you start looking for plastic stuff, it’s all over the place,” said Allison Tjaden, assistant director of new initiatives in Dining Services. “So, we keep up the fight.”

With an approximately $150,000 grant won last spring from the University of Maryland Sustainability Fund, staff were able to replace plastic bags, straws, utensils and coffee creamer cups with paper or other compostable products.

Tjaden said students used to come into her office to ask about sustainable alternatives to plastic bags. While she had worked with students on small outreach programs to promote reusable bags, Dining Services was moved to action by the efforts of student groups like the Sustainable Ocean Alliance and their petition to ban plastic straws.

While Dining Services will still use other plastic items, the initiative targets items that are so small they can’t be successfully recycled, Tjaden said. Since the Ocean Friendly Campus initiative launched, Dining Services removed about 1.3 million disposable plastics from the campus, she said.

“That’s really why we focused where we did,” Tjaden said. “Students have been asking for many years to get rid of plastic bags and plastic straws specifically. But we also thought, ‘What are other items that are similar to those things that we could also phase out?’”

According to the World Wildlife Fund, it can take plastic between 20 to 500 years to biodegrade, sometimes longer. Humans produce nearly 300 million tons of plastic per year — if the current trend persists, the ocean could have more plastic than fish by 2050, according to the United Nations Environment Programme.

All Dining Services shops also offer discounts to promote sustainable practices — such as 20 cents off for using a reusable cup or 5 cents off for using a reusable bag, Hipple said. Students with dining plans can also pick up a free reusable bag at the 24 Shop, the Commons Shop and the North Convenience Shop, a program started last semester that has since been expanded, he added.

[Read more: A petition calls for an end to plastic straws at the University of Maryland]

“They’re really looking for us to set the tone in changing people’s behavior,” Tjaden said. “How do we start shifting the culture on campus to one that is really prioritizing reuse?”

Freshman bioengineering major Ella Evensen applauded Dining Services for using their position and resources for the good of the campus and the global community.

“Plastics are obviously going to circulate,” Evensen said. “It all leads out to the ocean. So clearly what we’re doing here is going to have a global impact.”