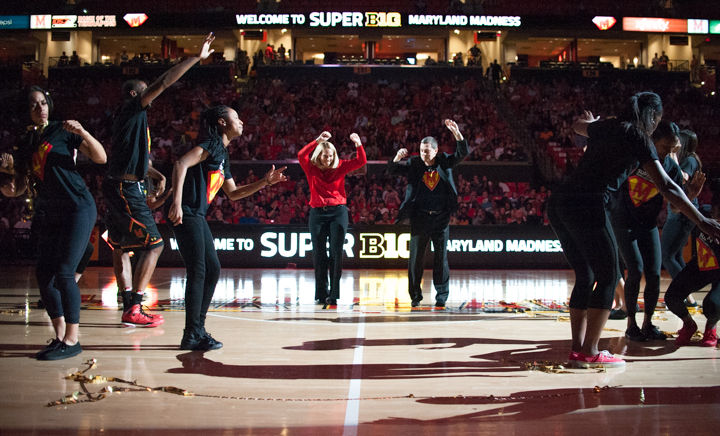 Men's and women's basketball head coaches Mark Turgeon and Brenda Frese join in during the dance at Maryland Madness on Oct 17, 2014 at the Xfinity Center.

Both Maryland men’s and women’s basketball are on hot streaks. Neither of the Terp teams have lost a game since mid-January and have only lost a combined three games since the calendar turned to 2020.

These hot streaks have seen both teams catapult to the top of the Big Ten standings as well as the future NCAA Tournament field.

In ESPN’s most recent renditions of Bracketology, both the men’s and women’s teams are some of the highest seeded teams in the field.

Maryland women’s basketball — which currently sits at No. 7 in the AP poll — clocked in as a No. 1 seed, according to ESPN’s Charlie Creme. It would be the first No. 1 seed for Brenda Freese and the Terps since their 2015 Final Four run.

The hypothetical NCAA tournament field would put Maryland in the Fort Wayne region of the tournament, with the first two rounds being held in College Park. The Terps’ hypothetical matchups would be against No. 16 seed Jackson State, and a potential second round matchup with the winner of Central Michigan and Texas.

While the men’s team doesn’t find itself as a No. 1 seed, they do sit comfortably as a No. 2 seed. The No. 2 seed would be the Terps’ highest seeding since their championship run in 2002, when they were a No. 1 seed.

Maryland would find itself in the Midwest region and in Greensboro, North Carolina, for the first two rounds of the tournament. Little Rock would be Maryland’s first test of the tournament, with the winner of Texas Tech and Xavier waiting as a potential second round matchup.

The start of the NCAA Tournaments are just over a month away, and with where the Terps are seeded right now, it should be an exciting March.