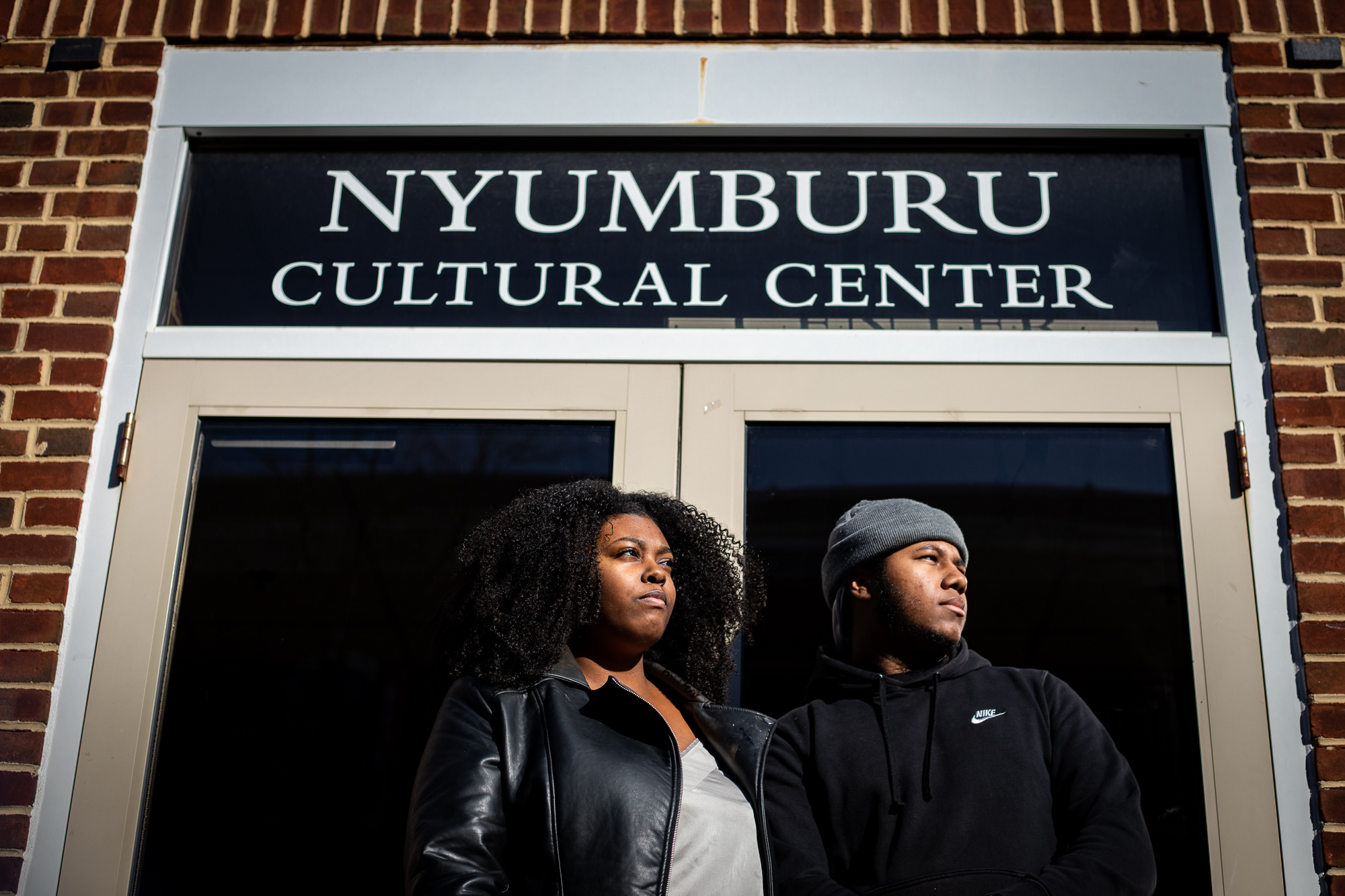 University of Maryland students Keith Livingston and Kala Mitchell in front of what they like to call their “home on campus,” the Nyumburu Cultural Center, in College Park on Feb. 14, 2020. (Suze Creedon/The Diamondback)

The first time Cherokee Boddy stumbled into the Nyumburu Cultural Center, it was just to take shelter from a storm.

Boddy, then a first-semester freshman, didn’t know that the building would become her home base — a place where she’d be handed a blanket when she needed a nap, or $10 when she needed something to eat.

Now a senior communication major, she’s one of dozens of black students who know the center as their safe haven on the University of Maryland’s campus. And she’s one of 12 who, on Thursday, signed onto a letter sharply criticizing the school’s diversity and inclusion vice president for not doing enough to support it.

“It is a constant struggle,” Boddy said, “to actually have a place on this campus.”

Since beginning her role in June, university diversity and inclusion vice president Georgina Dodge has had a tense relationship with Nyumburu’s community. Those tensions came to a head late last semester, when — at a pair of emotionally charged forums in the center’s basement — students and faculty blasted Dodge over concerns she was planning to cut Nyumburu programming and personnel.

Dodge, after quieting concerns she planned to oust Nyumburu director Ronald Zeigler, said she’d create an advisory board to allow students to air their grievances. Applications, she said, would be out by the beginning of the spring semester. Over two months later — and three weeks after classes began — those applications aren’t out, and frustrated students count the delay as another item to tack onto a long list of disappointments.

“We were hoping that the student advisory board would hopefully be a step in the right direction to bridge that gap and heal that tension,”  senior public policy major Alexis Robinson said.

At last semester’s forum, Dodge announced she’d assemble a committee to help her find an assistant diversity and inclusion vice president, which would oversee Nyumburu and the university’s LGBT Equity Center, among other offices. In addition to using their letter to demand updates on the advisory board’s status, students asked that an undergraduate student be placed on that committee.

And broadly, they argued that Dodge hasn’t made herself available to them — that they still felt voiceless and ignored by the university’s administration, despite the hours of back-and-forth they dragged themselves through in December.

Dodge responded in a letter of her own. Applications for the advisory board, she wrote, are “set to launch and will be distributed soon.” She once again refuted the resurfaced rumors about Zeigler’s job being in danger, and confirmed that there is an undergraduate student on the search committee. She offered to meet with Robinson, who penned the letter, and further discuss students’ concerns.

“I have the best interests of Black UMD students at heart, and I sincerely regret that you believe otherwise,” she wrote. “As I work to strengthen Nyumburu, I hope that I am able to gain your trust.”

Students did open their letter by thanking Dodge for attending Nyumburu’s black graduation ceremony in December and Black History Month kickoff this month. But those are two of their biggest events of the year, said Kala Mitchell, another student instrumental in writing and sending the letter. With many in attendance, they weren’t conducive to forming personal connections, Mitchell said.

And even if the application for the advisory board is in the works, students are tired of feeling in the dark about Dodge’s progress, said Keith Livingston, a junior finance major. Brief updates, he said, would go a long way — even if the projects themselves take a while.

“Information is valuable. Information is power,” Livingston said. “And when we don’t have information, students lose that very same power.”

In their letter, students called Dodge a “puppet” of the administration — an administration with which they’ve butted heads for years. Livingston — who skipped class Thursday afternoon to hand-deliver a copy of the letter to Dodge’s office — said he feels like Dodge “forgot the people that she’s here to work for.”

Both Robinson and Mitchell also missed all their classes Thursday to work on composing the letter, too, gathering signatures and outlining the points they wanted to make. Making sacrifices to advocate for the center isn’t anything new, Robinson said — and it’s not something she has to think twice about.

“If I didn’t have Nyumburu,” Robinson said, “my time at Maryland would have been devastating.”

When Robinson was struggling to make ends meet, the center got her a job teaching some of its workout classes. That’s helped her pay rent for the past two years, she said.

She’s not alone. Students who frequent the center describe a place where staffers greet them by name and ask about their classes, where they gather with friends to play pool in the basement rec room. Its conference room is home to something of a family dinner table, where — almost any time of day — you can find a cluster of students eating and doing homework.

Mitchell, a senior English major, said Sunday she was disappointed with Dodge’s response. Students still don’t know when to expect applications for the advisory board, for one thing, and they still don’t feel like Dodge is being open with them about how her plans are progressing. She still interprets Dodge’s writing as impersonal, and said her reassurances still don’t ring true.

So for now, they’re going to keep pushing.

“None of us are satisfied,” Mitchell said.