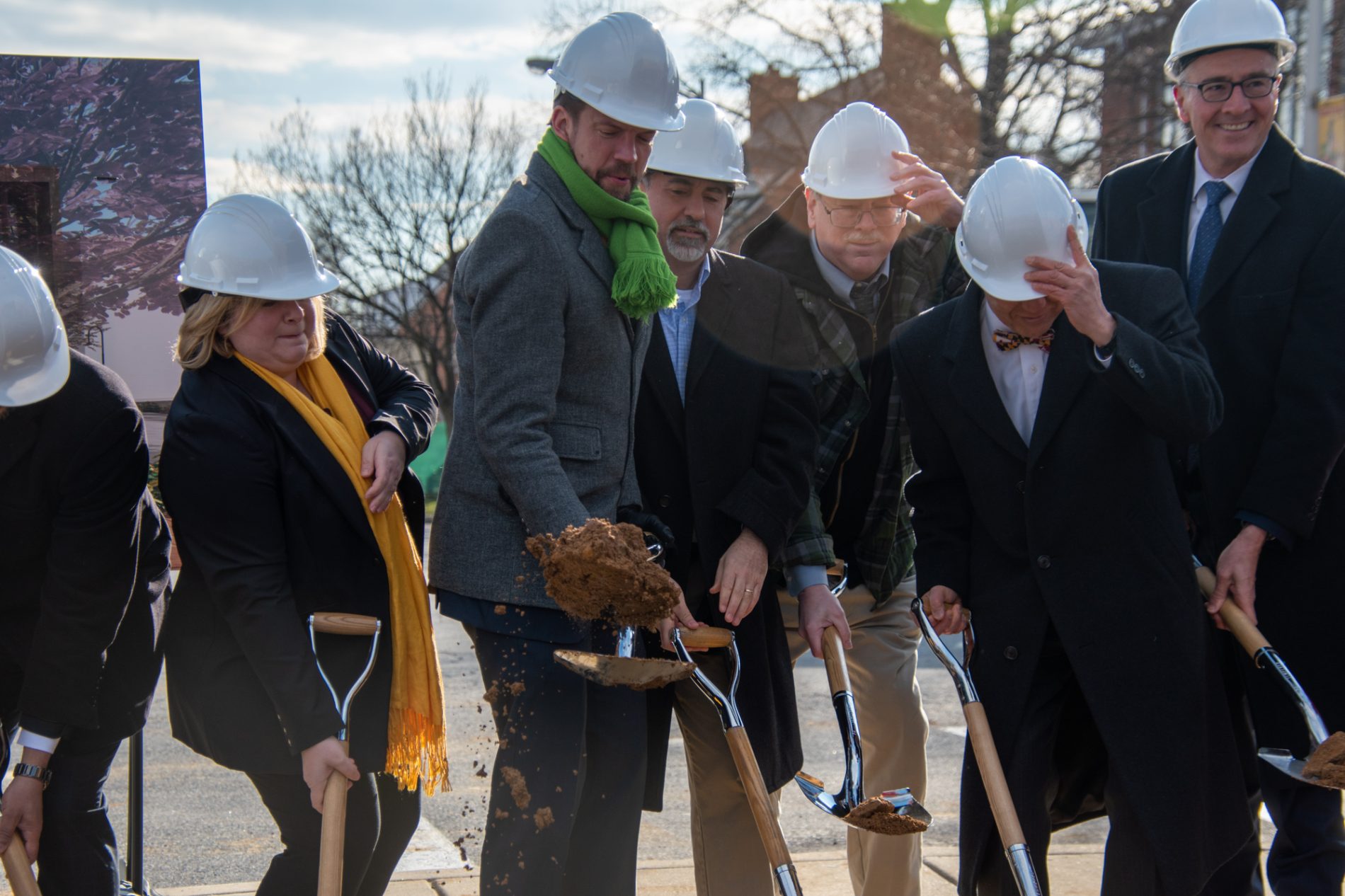 Members of the College Park community, including Councilwoman Kate Kennedy and the University of Maryland president Wallace Loh, dig in as Mayor Patrick Wojahn throws dirt in the air at the groundbreaking ceremony for the new College Park City Hall on Knox Road on Feb. 14, 2020. (Joe Ryan/The Diamondback)

College Park and University of Maryland officials congregated in the city’s downtown area Friday to officially mark the start of the multimillion-dollar construction of a new city hall.

University President Wallace Loh and Mayor Patrick Wojahn each took a turn scooping a shovel full of dirt from the site’s ground, located along Knox Road. The new building will span 95,000 square feet and house office spaces that both College Park and university officials will occupy.

Construction of the new city hall is expected to take around 18 months, with an anticipated move-in date in August 2021, city manager Scott Somers said. The old College Park City Hall building, located behind the now-closed Smoothie King and Subway is planned to be demolished within the next few weeks.

The new facility, which is estimated to cost the city and university about $50 million, will feature windows to let in natural light, various-sized meeting rooms, a public plaza and space for retail, according to a September city council presentation.

At the groundbreaking ceremony, Wojahn expressed hopes that the project would stimulate the city’s economic development and “reactivate” its downtown area by bringing more full-time employees to College Park. He added that the facility’s outdoor plaza and extra meeting space will give residents more opportunities to meet and gather.

“It’s probably more important than any other particular development,” Wojahn said. “It’s the center of where our city government operates, and it’s a catalyst for more development in our downtown area.”

The collaborative project between the city and university will have offices for 70 city employees and 200 university employees, Wojahn said. Financing for the building will be distributed proportionally, with the university paying more than two-thirds of the project’s total cost, said Ed Maginnis, this university’s real estate assistant vice president.

“This is a complicated real estate transaction,” he said. “It’s not simple.”

The city owns approximately 82 percent of the property where the new city hall will sit, but the university is planning to use more square footage in the building, according to an agenda from a December meeting of the University System of Maryland’s finance committee. To make up for this discrepancy, the university will pay the city $2.38 million, the agenda noted.

The new facility will allow all city employees to work under one roof, College Park planning director Terry Schum said. Currently, city workers and officials are stretched out between several separate buildings.

The university decided to collaborate with the city because it soon will also need additional office space, Maginnis explained. Construction for the Purple Line is expected to run through the school’s service building, and displaced employees will need a new place to work.

In preparation for the old city hall’s demolition, city council meetings were moved to Davis Hall in September, and city staff moved out of the building in October. Several shops along Route 1 that planned to be redeveloped as part of the project — including Subway and Smoothie King, as well as Hair Cuttery — also closed their doors over winter break.

Maginnis said the Terrapin Development Company — the University of Maryland College Park Foundation’s real estate business that owns the retail storefronts pegged for redevelopment — plans to build the property back up and re-lease it by 2022.

“The intention is that by 2022, the retail will be built out to prescribed conditions,” Maginnis said. “The TDC will then engage in leasing out that space.”

At the groundbreaking ceremony, former College Park Mayor Andy Fellows noted that the project falls in line with the city and university’s mission to make College Park a top-20 college town by this year.

“This is a symbol of an architectural anchor,” he said, “and an anchor of what will truly be one of the greatest college cities in the world.