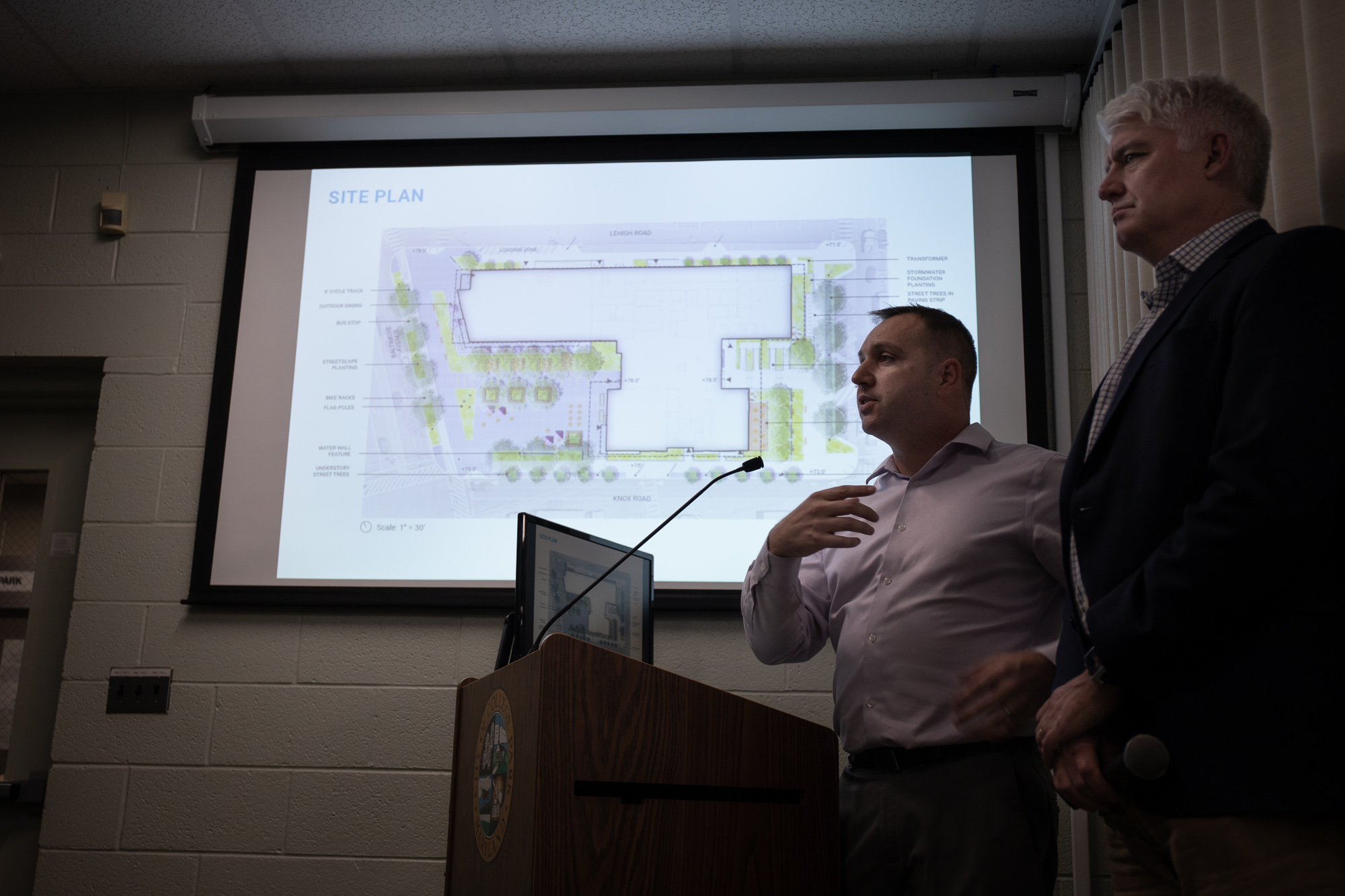 Brian Reetz and Scott Vieth of Design Collective present a plan for the plaza in front of the new City Hall building at the College Park City Council meeting on Nov. 19, 2019. (Julia Nikhinson/The Diamondback)

Despite half an hour of discussion and a close vote, the College Park City Council decided Tuesday night not to move forward with a water feature for the city hall project.

The project — which will include the construction of a plaza outside the new City Hall — is set to be completed in 2022. And with a 3-4 vote, the council decided against having a water wall in the works.

The council originally discussed adding a decorative water wall to the plaza during a meeting on Oct. 22. But a presentation of architectural plans from Design Collective — the company designing the project — pushed the council into making a decision on whether to move forward with the feature.

“In a city that has a notable shortage of public places in our civic life, I really see this plaza as being a real key to the entire development,” said District 3 Councilman John Rigg, who voted in support of the water wall.

During last month’s work session, the council was told the water wall would cost approximately $235,000, said District 1 Councilman Fazlul Kabir. But on Tuesday, the estimated total for the water feature was around $400,000.

Brian Reetz, a landscape architect from Design Collective, said the price increase was the result of the water wall’s more specified features and design.

While the city would split the cost 50-50 with the University of Maryland, which is a partner in the project, the cost for the city was still an issue that concerned some council members such as Kabir and District 4 Councilwoman-elect Maria Mackie.

“The people in my district are concerned about the cost and the maintenance of a water feature,” Mackie said.

Members of the council also expressed concerns about how the feature would look during the winter and how to deal with exposure to possible vandalism and public urination, to which Reetz said there would be a filtration system every 30 minutes to clean and filter the water.

Scott Somers, the city manager, said the city would have provided security cameras to monitor the area.

While the third and fourth floors of the new City Hall will be reserved for this university’s offices, Reetz said, the outdoor plaza will be a place of flexibility, able to hold retail spaces and outdoor seating and public art.

District 2 Councilman P.J. Brennan said the council’s vote allows the body to use the money saved on things that would better serve the city’s interests, such as investing in public art.

“I think it’s wonderful,” Brennan said of the design for the water feature. “But it’s not something that I think really is needed.”