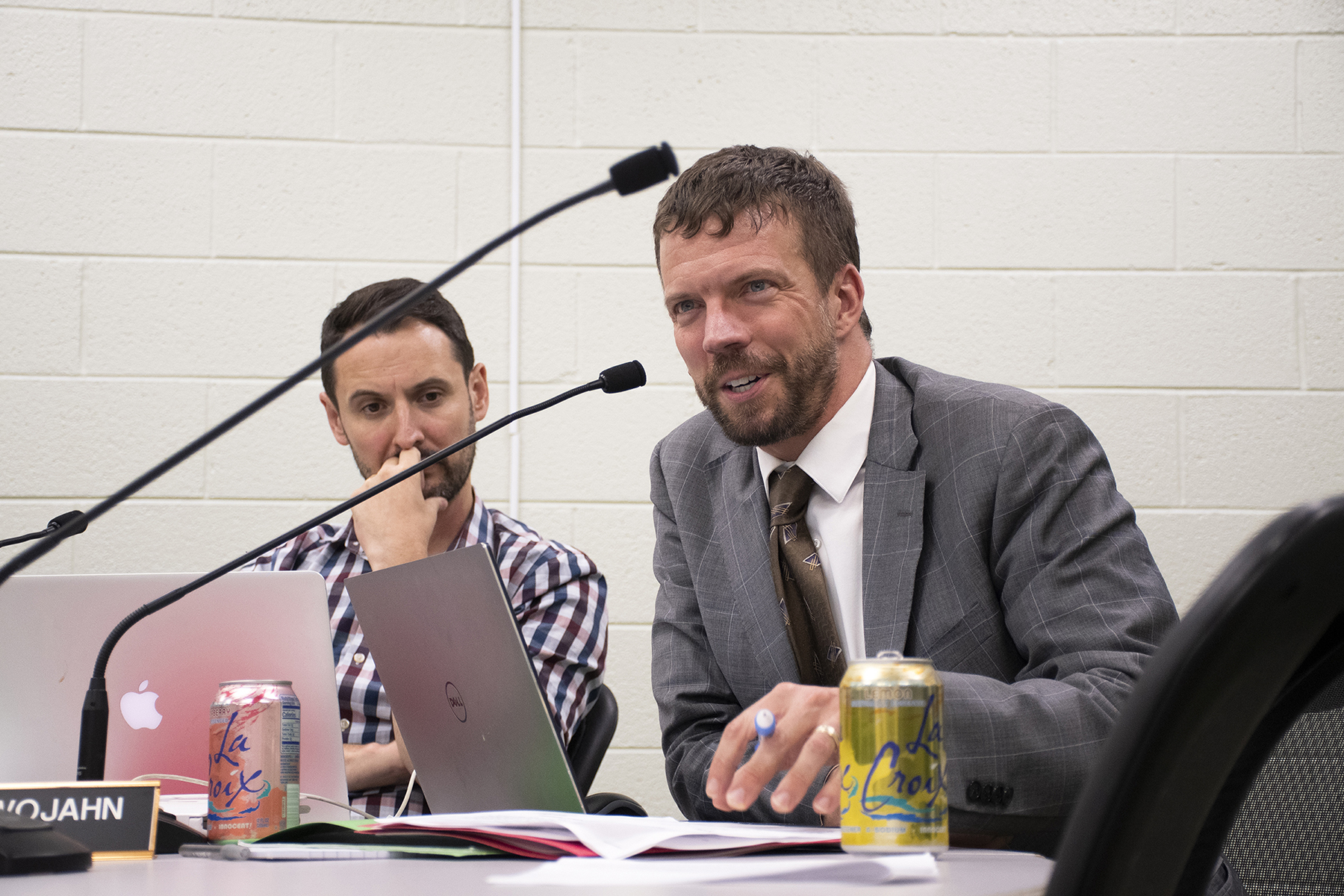 By the end of the night, about 60 people had spoken up regarding the ordinance, which redefines “unruly social gatherings” as a nuisance and leaves residents and landlords susceptible to fines. University of Maryland students and city residents waited in a line that sprawled out of Davis Hall’s doors for a chance to voice their thoughts.

David Dorsch, a 45-year College Park resident who also spoke on the issue at a council meeting in early September, said Tuesday the ordinance discriminates against students.

“College towns have students, the students — just like other residents — should be able to get together and have fun,” Dorsch said, drawing applause from the audience after his testimony.

Like many who spoke, Dorsch took issue with the ordinance’s language, claiming it was too vague. Part of the definition of unruly social gathering, as stated in the ordinance, is “conduct which constitutes a threat to the public safety” or general welfare.

“How subjective can you get? Who determines what a substantial disturbance of the peace is?” Dorsch said, “What’s an unruly crowd?”

At the tail end of the meeting, District 3 council member John Rigg put forth four amendments to alleviate some common concerns about the ordinance — but they didn’t fully address worries about its wording.

The first of the amendments clarified that residents won’t be fined for a single noise violation under two different ordinances — the social gatherings ordinance and the city’s noise ordinance, another piece of legislation that passed Tuesday night and further limits nighttime noise.

Additionally, the amendments adjusted the definition of a social gathering from four to eight people. They also changed when a landlord’s occupancy permit would be revoked, from immediately after the resident’s third infraction to the end of their lease — responding to concerns that the ordinance could leave tenants homeless.

The fourth amendment changed the fines that could be imposed on a landlord to $500 each infraction. All of the amendments passed 5-3.

While Tom Gray, a property owner and longtime College Park resident, said the amendments addressed some of his issues with the ordinance, he is still left with concerns about whether or not students’ opinions were taken into consideration.

“There was a unanimous vote about something that was so universally opposed by students, and it means their voices aren’t heard,” Tom Gray said.

Rigg’s amendments also didn’t address student concerns that the ordinance specifically targeted students, or worries about the financial burden that would come with potential fines.

Others argued that the ordinance needed more time to be discussed. Near the end of the meeting, Rigg suggested that the council meet with members of the on- and off-campus communities to discuss the legislation’s effects.

Over the past week, more than 2,000 students at this university signed a petition against the original unruly social gatherings ordinance. Their signatures accompanied a letter — co-written by the Student Government Association, Interfraternity Council and Panhellenic Association presidents — that called for the rejection or amendment of the ordinance.

“We as students and residents can be better — need to be — better neighbors,” said Daniel Yelsits, a senior government and politics major and Interfraternity Council president at this university. “I don’t think that this ordinance is the answer to that.”

And students weren’t the only ones to voice concerns.

Many landlords present claimed there is no way they could be expected to monitor students’ choices, making it unfair they could be held accountable for their behavior under the new ordinance.

When her turn to address the council came, Carol Gray identified herself as a landlord, a former student at the university and College Park resident for over 40 years.

“Wearing all three hats, I would urge you to listen to these kids,” Carol Gray said.

But those in favor of the ordinance argued that many of the actions included in the definition of unruly social gatherings are already prohibited actions under law, such as public urination, littering and public drunkenness. Proponents of the ordinance also pointed out that individuals wouldn’t face criminal charges under its text — just municipal infractions.

The Constitution was cited by both sides of the debate. Many who opposed the ordinance argued that it went against the First Amendment’s right to assemble, while those in favor argued that the Constitution allows for peaceful assembly, and unruly social gatherings are not peaceful.

Chris Keosian, who was the student liaison from 2016 until his graduation in 2018, commuted to College Park for the public hearing from Washington, D.C. On Monday, a letter from previous student liaisons to the council was sent in opposition of both the noise and unruly social gatherings ordinances, with signatures from every student liaison since 2012.

Keosian said he pitched the idea of writing a letter because he believes he has a “responsibility to stand up for what’s right,” even though his tenure on the council has ended.

“Ordinances written specifically to target student residents do nothing to live up to the mantra of ‘One College Park’ or build a ‘Top-20 College Town,’” the letter said, signed by Alex Tobin, Keosian, Cole Holocker, Catherine McGrath and Josh Ratner.

Just before 11:30 p.m., the ordinance passed with the amendments. But Tom Gray said the decision will have repercussions that go beyond the ordinance.

He had one piece of advice for students: vote.