After years of delays, South Campus Diner construction is set to finish over spring break 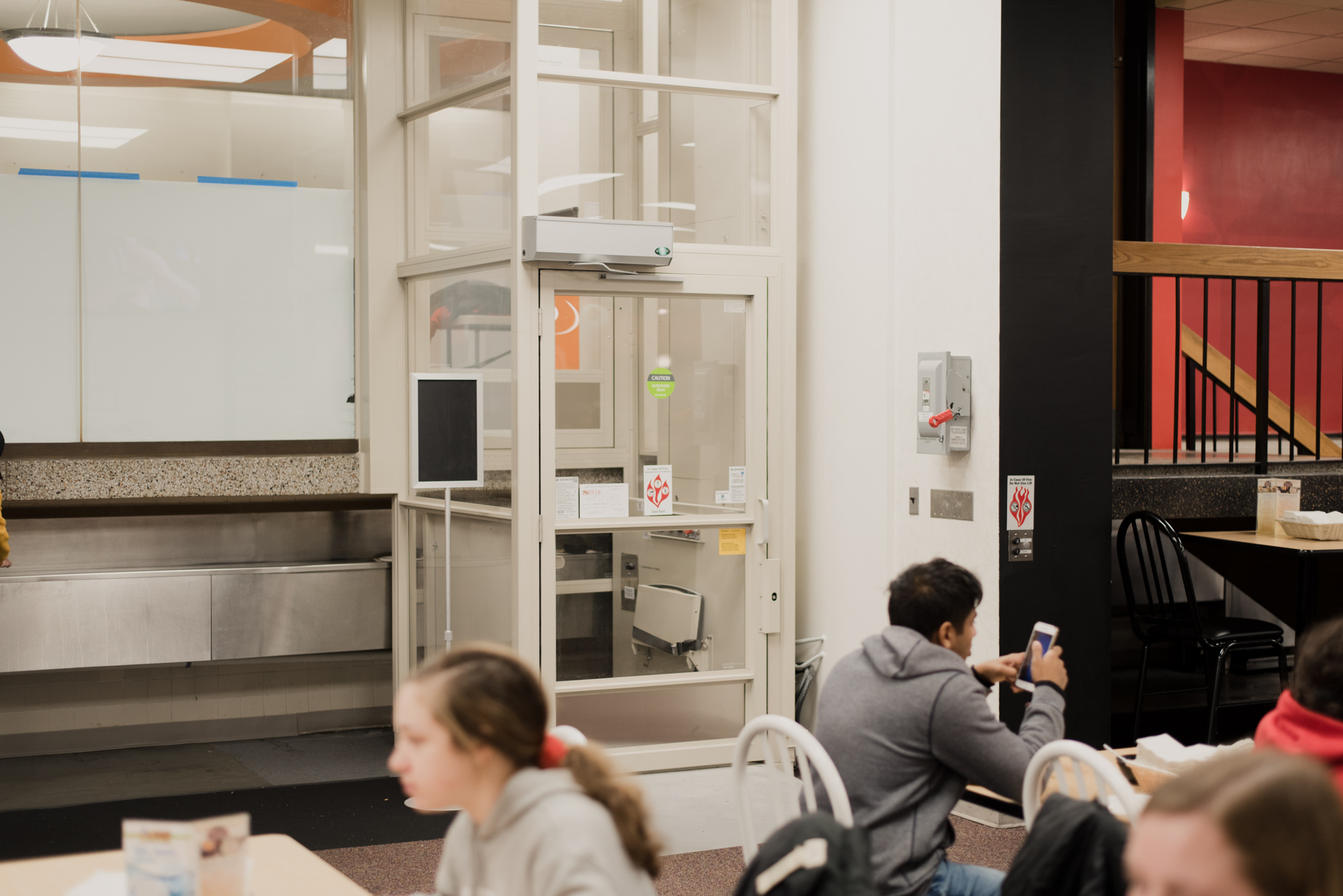 The ongoing construction at South Campus Diner is intended to increase its accessibility through the installation of an elevator and a gender-neutral bathroom. (Gabby Baniqued/The Diamondback)

Once planned to finish at the beginning of last semester, construction on the elevated eating area in South Campus Dining Hall is now anticipated to be completed during spring break, Dining Services spokesperson Bart Hipple said.

The eating area will not only be completely refurbished, but also feature a wheelchair lift and the first gender-neutral bathroom in an on-campus dining hall, Hipple said. Existing bathrooms on the second level will also have been renovated to meet ADA and university standards.

Construction for the renovations began last May, after graduation, Hipple said. Since then, as workers removed the area’s existing plumbing and began prep for the lift’s installation, an entire eating space has been blocked off to students.

“We’ve got this whole dining space nobody can use and we need it,” Hipple said. ”Particularly Monday and Wednesday right when classes let out at noon, we really miss that extra seating space.”

Financing troubles and other unanticipated challenges have meant years of delay for the project. Back in 2018, the Student Facilities Fund rejected a request from Dining Services for additional funding, which caused the construction’s start date to be pushed back. The department eventually secured the money it needed to begin the renovations from the Advisory Student Facilities subcommittee.

A number of other factors stretched out the time construction took, as well, Hipple told The Diamondback in October. The department needed to pin down design details, secure a government plumber to approve some of the work and decide on the safest location for the wheelchair lift.

Additionally, since the building is so old and has gone through so many modifications in the past, Hipple said lots of unexpected obstacles popped up during the project. Workers had to be careful when maneuvering around wiring and air ducts ports, which made the renovations take longer than expected.

However, Hipple said, the biggest challenge in the process was the department’s inexperience with handling large-scale accessibility projects.

Some students, such as junior government and politics major Sawyer Carlesi, feel like the project has dragged on.

“I don’t have an issue with the construction but I do notice that the projects tend to take a very extended amount of time,” he said.

Others, however, expressed that the time the project has taken will be worth it in the end. One student, sophomore journalism major Dylan Josephson, praised the gender-neutral bathrooms. It’s 2020, he said, so he’s glad the university is accommodating the gender identities of its students.

And anthropology majors Abbi Pytlewski and Ahna Feldstein both said they didn’t mind the construction, especially given that the renovations will make the diner a more accessible place for students with disabilities.

“I was looking at [the wheelchair lift] the other day and I was like ‘Oh that’s nice, they’re making a way to get people up there,’” said Feldstein, a junior. “I’m going to put aside my own annoyance.”