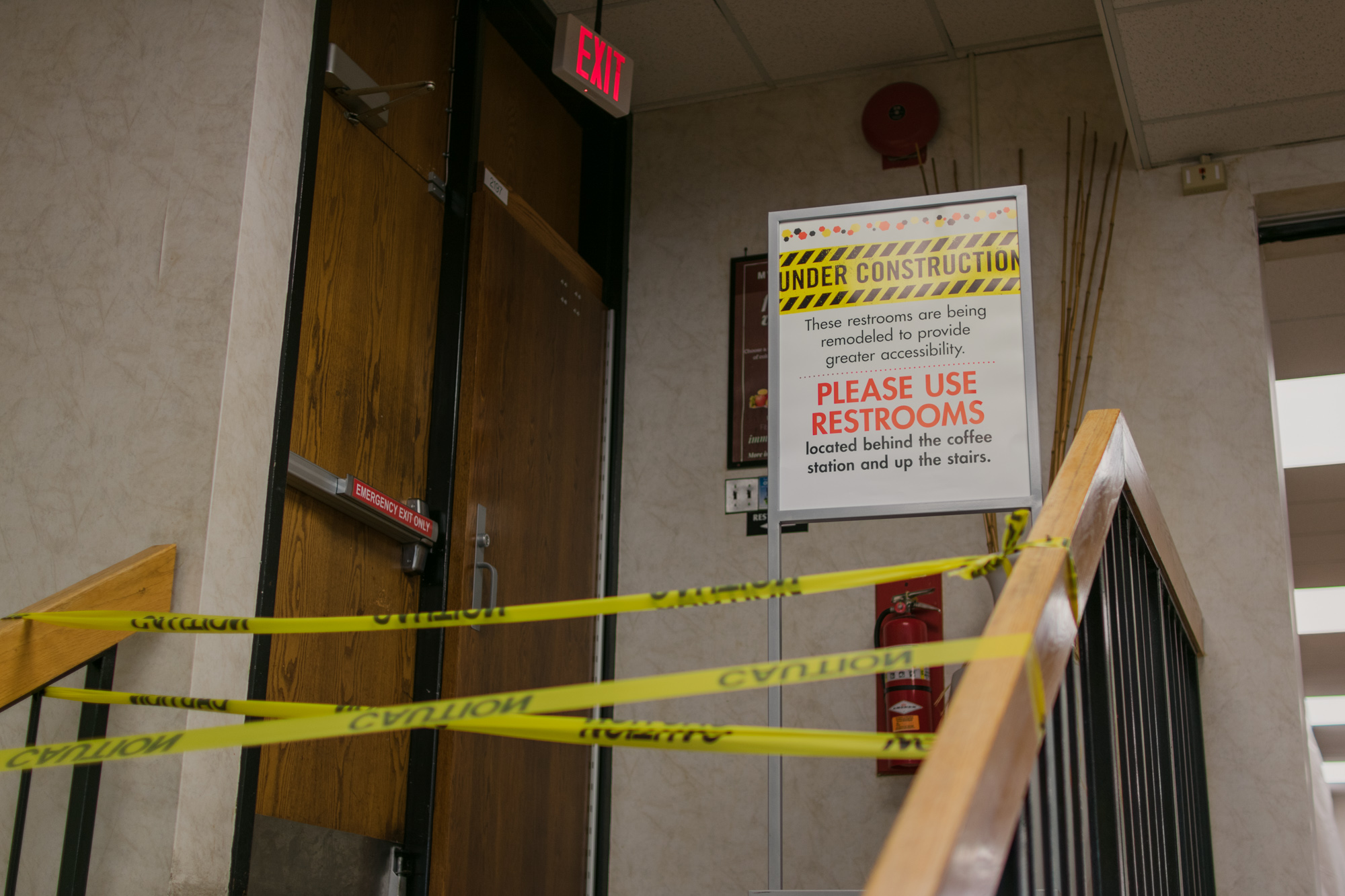 A pair of restrooms in the South Campus Dining Hall are closed for construction that aims to create more accessible restrooms. (Gabby Baniqued/The Diamondback)

After years of delays, renovations to make the University of Maryland’s South Campus Dining Hall more accessible are set to take a semester longer than expected.

The project — which includes installing a wheelchair lift, creating a gender-neutral bathroom and renovating existing bathrooms to meet ADA and university standards — was supposed to finish by the beginning of the fall semester.

Now, due to construction setbacks, it is likely the project will continue until the start of the spring semester, said Dining Services spokesperson Bart Hipple.

“We want the dining halls to be welcoming and inclusive to everybody who comes in to eat,” Hipple said. “We are working on it as hard as we can.”

Once the renovations are complete, there will be a wheelchair lift that students with disabilities can use to get to the bathrooms, which are located on the second floor. Currently, students who aren’t able to climb the stairs have to leave the building to use the restroom.

Additionally, Hipple said, there will be a gender-neutral bathroom between the men’s and women’s ones — which will also be renovated to incorporate accessibility features, such as widened doorways and lower sinks that are easier to reach for those with mobility devices.

But right now, everything is still under construction. The parts for the wheelchair lift are being installed, while the bathrooms are under demolition and all the sinks and toilets have been removed. Workers also still have to knock down walls for the third bathroom.

Adith Thummalapalli, a senior mechanical engineering major who uses a wheelchair, has had to leave the dining hall and go to nearby LeFrak Hall to use the bathroom.

He said he wasn’t surprised by the delay due to the magnitude of the project. Last semester, Thummalapalli wrote up a 43-page report, endorsed by the Student Government Association, that outlines a variety of accessibility issues around the campus. The South Campus Dining Hall was included.

“The whole reason we even started talking about writing up the report was to help the university prioritize what things are important,” he said. “The whole intention was just to be able to show them ‘Hey, [South Campus Dining Hall] is a priority for the students.’”

But some of the projects he hopes to get done, including adding more crosswalks, will be inherently easier – and he understands that other projects require more time and manpower.

“Every disability measure takes a different amount of effort,” he said. “I just want to be sure these changes will be here for students in the future.”

Jake Dahreddine, who uses a prosthetic leg and sometimes a wheelchair, wasn’t as forgiving.

“It’s one of the most common public areas for underclassmen. That’s almost inexcusable to me,” the senior kinesiology major said. “Every single building needs to have appropriate accessibility.”

There were a variety of factors that made the project take longer, Hipple said, like nailing down designs, finding the safest location for the wheelchair lift so it wouldn’t overheat and securing a government plumber to approve some of the work.

The biggest difficulty, Hipple said, was the department’s inexperience with large-scale accessibility projects.

“This is a very large project, with a lot of very complicated and difficult pieces to it,” Hipple said. “We’ve not done anything quite like this before, so we’ve learned a lot about it as we move forward.”

However, the wait for this project has been much longer than an additional semester. Joe Mullineaux, the department’s senior associate director, told The Diamondback in April that Dining Services had been saving for the project for five or six years.

Rather than downsizing the project, the department waited until the following spring and requested the additional $235,000 needed from the Student Facilities Fund, aiming to complete the project by fall 2018. However, they never got to start – their request was denied, Hipple said.

Though the estimated cost rose to $500,000 and Hipple said it may rise more, the department finally secured money to begin working on the project in April with the help of $177,500 from the Advisory Student Facilities subcommittee.

Hipple said he asks students to be patient.

“The clearing of accessibility issues has not been happening for the last hundred years or so,” he said. “I’m delighted that it is, but it does mean that there’s a big backlog of problems that need to be resolved.”

But Dahreddine said the delay was still unacceptable. He’s an honor roll student, an athlete and a hiker — and the fact that he sometimes needs help getting around, he said, shouldn’t interfere with his ability to use the bathroom like other students.

“[This is] supposed to be the premiere university in one of the richest states,” he said. “The fact that we can’t exist in certain spaces is inexcusable.”