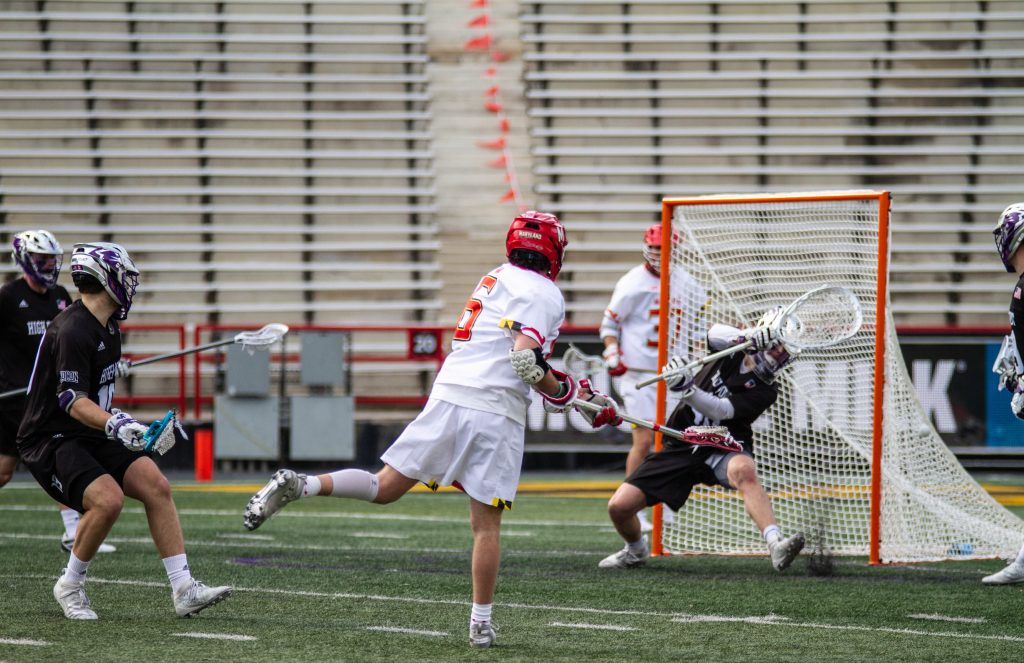 Attackman Logan Wisnauskas circled around the net, hoping to find a shooting angle. No. 4 Maryland men’s lacrosse’s top scorer had been a threat all day, notching his second hat trick in as many games to help fuel Maryland’s comeback efforts.

The Sykesville native was hounded by two Richmond defenders, though. And with the Terps already in their second overtime and fatigue setting in, it seemed likely that the scoring chance would go by the wayside.

But Wisnauskas turned provider, seeing attackman Anthony DeMaio flashing just outside the crease. DeMaio received the ball, leapt into the air, and fired.

Seconds later, he was mobbed in a sea of red, having secured a dramatic 14-13 comeback victory over the Spiders on Saturday.

“We thrive in those situations,” attackman Jared Bernhardt said. “We don’t get down on ourselves, stay positive, and keep pushing and usually it works out for us.”

Although the result was in their favor, the Terps had their hands full for much of regulation. After holding High Point’s Tewaaraton Award hopeful Asher Nolting to one goal last Saturday, Maryland’s defense looked poised to knock back the Spiders’ attack — an offensive scheme largely centered around attackman Ryan Lanchbury’s goal-scoring threat.

Defender Brett Makar was tasked with marking Richmond’s top man, and the sophomore succeeded in limiting his impact in the first half. Lanchbury had two shots in the opening 30 minutes.

It was Richmond’s supporting cast, though, that posed a problem for the Terps’ backline. Midfielder Mitch Savoca opened the scoring two minutes into the first quarter. A little more than a minute later, Savoca doubled the lead, carrying the ball deep into Maryland’s half before slotting past goalkeeper Chris Brandau.

It was a telling start for the Terps — one that set the stage for a poor first-half display in which coach John Tillman’s squad struggled to control the area in front of their crease.

“Richmond played great,” Bernhardt said. “They had a plan, they were executing very well.”

Savoca and attackman Richie Connell combined for six first-half tallies. And the Terps, fresh off racking up 23 goals against the Panthers on Saturday, looked far more impotent, scoring a mere five goals.

“They’re a really good team, they’re really organized,” DeMaio said. “They go in and out of zone and man, and that can be a little frustrating at times.”

All of this amounted to a three-goal disadvantage for the Terps, one that would soon grow to four at the end of the third frame.

But even as the frustration compounded, as Maryland saw shot after shot whistle beyond goalkeeper Jack Rusbuldt’s net, the Terps stayed optimistic. The attacking talent was there, after all. Tillman’s squad had shown it in bunches against the Panthers.

“Everyone was trying to stay positive,” DeMaio said. “Things weren’t going our way and we had a little bit of that last year. Learning from our mistakes where maybe we didn’t respond as well.”

“We follow our leaders — Jared and Logan. They did a great job getting us back into that game,” DeMaio said. “We feed off of their energy.”

After midfielder Tate Gallagher pulled one back for Richmond to bring its edge up to two, Bernhardt went on to tally twice late in the frame to even the scoreline at 13. And though a late chance to complete the comeback in regulation ended with a turnover, Bernhardt had breathed new life into his team with sudden-death overtime on the horizon.

DeMaio would ensure his teammate’s efforts didn’t go to waste, slotting home in the second period of extra time to crush the hopes of the upset-minded Spiders and keep his team’s record spotless two games into the season.

“It’s definitely a wake-up call, we gotta do some things better,” DeMaio said. “It’s the way that early-season lacrosse works, we gotta get through that stuff. We’re trying to play our best ball at the end of … the season.”

But for now, with months left to improve, an unlikely comeback victory is enough for the Terps.