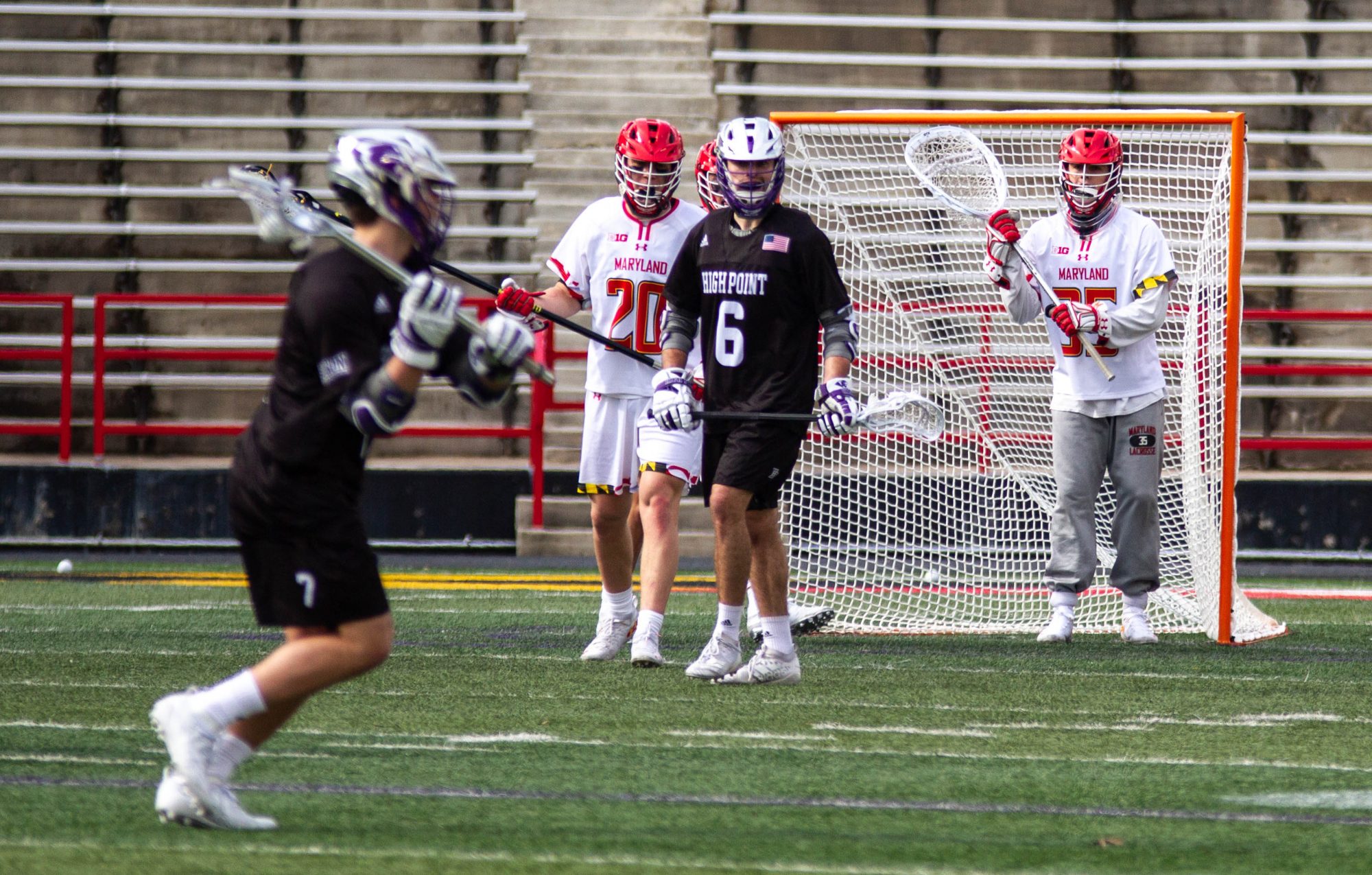 It was frenzied, exhausting, free-flowing, fast. And, mercifully, it was almost halftime.

Maryland men’s lacrosse trudged to the final 25 seconds of an enthralling 11-goal second quarter, hoping to take its two-goal advantage into halftime. And with High Point midfielder Koby Russell ambling toward the corner of the field, it seemed the Panthers had a similar idea in mind.

But then Russell saw an opportunity. Russell slipped past midfielder Alex Smith, flashing a ball into attackman Ben Baker’s stick, who then went one-on-one with goalkeeper Chris Brandau. Brandau stood tall and denied Baker, rushing out of goal to regain possession in the process.

But High Point’s attackmen harried the Maryland sophomore, who responded by floating a cross-field pass right into the path of attackman Asher Nolting — six yards out, with the goal gaping. The whistle blew, though — Brandau had been fouled before making the pass.

It was an exchange that showed Brandau’s qualities — shot-saving, confidence, an even-keel mentality — along with his flaws. After his transfer from Georgetown, the Terps are prepared to give Brandau time, especially as he continues to impress on the practice pitch.

“His journey wasn’t here initially, but he made it here,” midfielder Roman Puglise said. “He’s seizing every opportunity.”

Brandau came into the spotlight last May, combining for 35 saves during the Hoyas’ postseason run.

But the sophomore’s journey started about an hour away in Timonium, playing for Boys’ Latin. For Brandau’s teammates, his local background gives him an edge, an intrinsic motivation to fight for the shirt that can take time for non-local players to develop.

“He’s been an extremely hard worker who’s just trying to absorb as much knowledge about being a Terp, and Terp lacrosse as he can,” Puglise said. “Being from the state of Maryland, he has a lot of pride in being here.”

With top schools circling following his end-of-season exploits, Brandau chose Maryland. With Danny Dolan’s departure, Brandau was immediately thrust into a battle for the starting position in net.

Brandau won out in the end, taking the reins for Maryland’s home opener on Saturday. It was a difficult game for the netminder at times, particularly in the second quarter. The Terps struggled at the X, conceding multiple transition opportunities straight from the faceoff.

Oftentimes, that left Brandau and his backline exposed, resulting in an offensive onslaught by the Panthers, who racked up five goals in the second frame.

But as the Terps came into the game in the second half, so did Brandau.

“I thought Chris Brandau settled down,” coach John Tillman said after the game. “I think we helped him a little bit.”

Gone were the odd-man rushes that threatened to break the game open for the Panthers. In their stead was a more subdued High Point attack, one that struggled to get past a goalkeeper buoyed by the faith of his teammates.

“We have a lot of confidence in him,” attackman Anthony DeMaio said. “We know how hard it is to score on him, so we really trust him when it comes in the game.”

Brandau began to show the talent that enamored Tillman when the transfer portal opened, recording 15 saves Saturday — tied for his career-best total. And in the fourth quarter, with Maryland holding a comfortable six-goal lead, Brandau’s quality shone through.

Nolting — a 2019 Tewaaraton Award nominee who netted 44 times in 2019 — spun and thumped a shot toward Brandau’s net. The sophomore stood tall, just as he did in the first half, and handled Nolting’s effort.

Then, he picked his head up, lofting a 40-yard pass to midfielder Bubba Fairman striking down field. Fairman did the rest, rifling the ball into the top corner.

“The way he gets the ball out fast, in the way he sees the field in front of him,” Puglise said. “He’s a great teammate, and that makes it easy to play with him.”

It was the first assist of Brandau’s career. It won’t be the last.