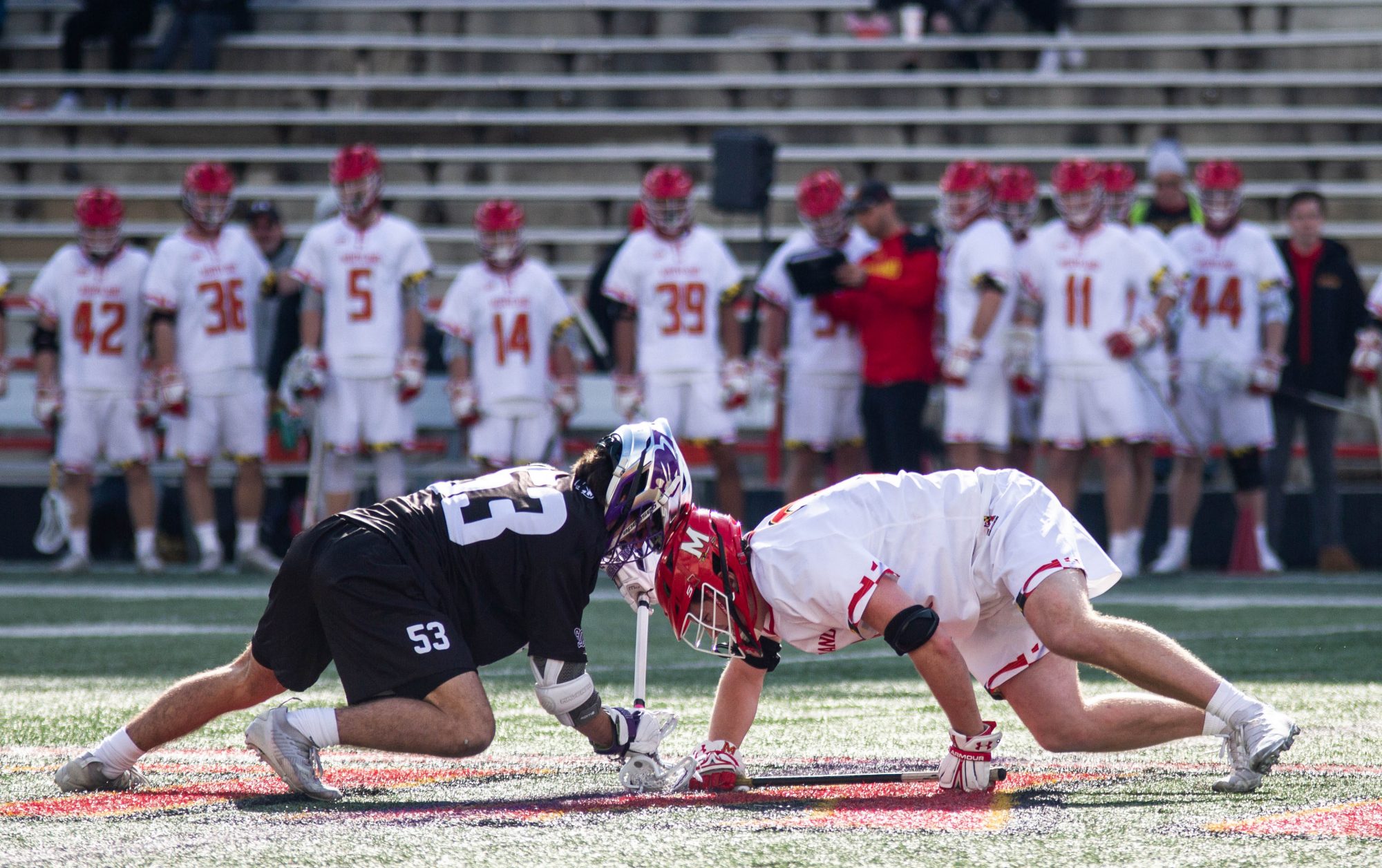 Once Justin Shockey lifted the ball into the air, the rest was a formality.

The Maryland men’s lacrosse faceoff specialist crouched in front of the X early in the fourth quarter, mirroring High Point’s Davis Sampere and looking to set up a transition opportunity for the Terps.

With the first flick of his stick, Shockey was past Sampere, cratering toward the opposition’s goal. With his second, the net rippled and Shockey jumped into his teammates’ warm embrace.

Faceoffs were a weak point for the Terps at times last campaign, especially during postseason play. But with Maryland struggling to contain a potent Panthers attack in the first half, coach John Tillman turned to his faceoff options, making a series of adjustments in an effort to reduce High Point’s ability to generate possessions.

The changes paid off, giving Tillman’s squad a platform to let its attacking talent shine on. And they were the biggest factor in Maryland turning a slim two-goal halftime advantage into a 23-12 beatdown Saturday.

“I felt like that was a big difference in the second half,” said Tillman of the faceoff adjustment. “We were able to … get a goal, get the ball again, get the ball, get a goal again.”

It didn’t start that way, though. After racing out to a three-goal lead early in the opening frame, the Panthers clawed their way back into the game after Hunter Vines’ strike late in the first.

Sampere won the subsequent faceoff, eventually falling into the path of attackman Tyler Hendrycks, who thumped the ball past goalkeeper Chris Brandau some 35 seconds after the game restart.

“Offensively, when we get the ball to those guys, they’re talented and they score,” High Point coach Jon Torpey said. “You saw that in the first half.”

And as the scoring picked up in the second quarter, the Panthers continued to capitalize on Maryland’s torpidity at the X, winning 8 of 12 faceoffs in the frame. Even with Maryland’s attack continuing to give High Point’s backline fits — winning the shot battle 20-8 — it seemed as if every Panthers break was in transition, the consequence of yet another faceoff victory.

“Credit them, in the first half we had a tough time getting the ball back,” Tillman said. “We struggled in the second quarter, especially.”

[Read more: Maryland men’s lacrosse relishes its “next play mentality” as it preps for a new campaign]

With the Panthers gaining confidence with every win at the X, Tillman knew a change was needed. After calling on his faceoff men to show more consistency leading up to the season, Tillman opted for a more aggressive approach for Shockey and freshman Conor Calderone. Soon enough, it was Maryland that was creating transition opportunities and odd-man rushes seconds after scoring.

And it was the Panthers who couldn’t cope.

“All credit goes to John Tillman and his staff,” Torpey said. “I thought their second-half adjustments at the X were elite. We have a lot to learn.”

Shockey was especially impressive, winning 15 of 26 faceoffs while scoring his first goal in two years. After impressing in the offseason, Shockey looks poised to be a central figure at the X for the Terps — a position that appears to be on an upward trend.

“He’s in the best shape of his life, he’s done a really good job so far,” Tillman said. “I’m really impressed with how focused he is. We’re excited about what he can do in his junior year.”

Maryland is still looking for more consistency from its faceoff specialists, especially after a disastrous display against Virginia gifted the Cavaliers opportunity after opportunity en route to a premature postseason dismissal last season.

“That’s a big area of improvement for us that needs to be improved,” Tillman said. “We gotta be consistent there — more consistent than last year.”

Saturday, if anything, was a positive first step for the faceoff unit — a unit that showed glimpses of real quality throughout the second half.

And for now, that may be just what Maryland needs.