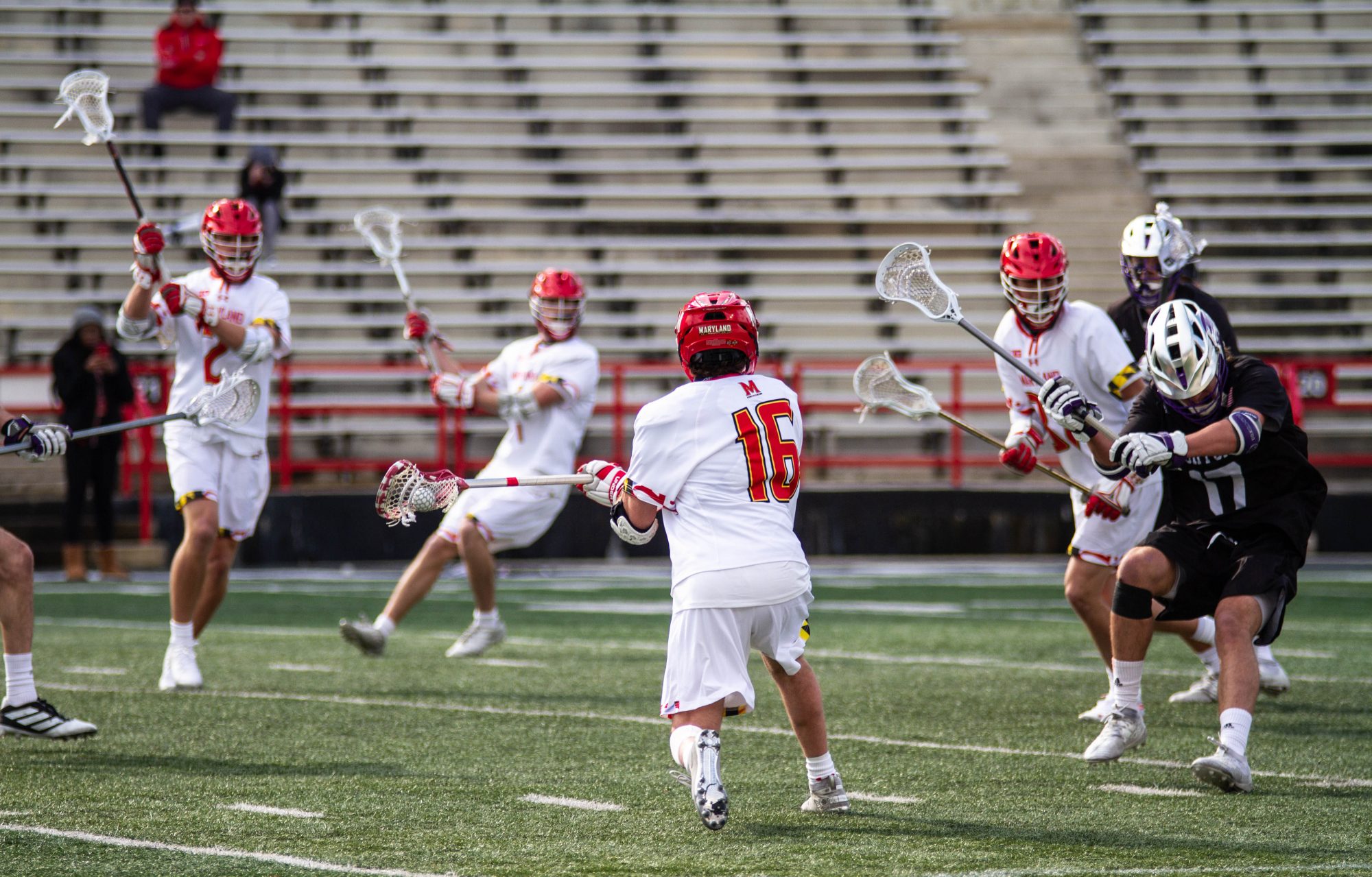 Anthony DeMaio had been on SportsCenter’s Top-10 plays one time before Saturday — setting up Louis Dubick for a clever flick against Colgate last season. But the attackman’s assist on that highlight-reel play was overshadowed by Dubick’s skillful finish, a behind-the-back effort that nestled into the bottom corner.

Late in the third quarter of Maryland men’s lacrosse’s contest with High Point, it was DeMaio who displayed his offensive ingenuity. The junior averted defenders’ efforts to dispossess him and saw attackman Logan Wisnauskas flashing toward the goal. Mirroring Dubick, DeMaio whipped the ball behind his head, feeding Wisnauskas for a first-time finish.

It’s a move the duo worked on often during winter break. And it’s a move that earned DeMaio and Wisnauskas an appearance on SportsCenter last week.

“Being here over break with Logan,” DeMaio said, “we gained a little bit more chemistry and trusting in each other when it comes to those two-man plays.”

Hidden behind the glamour of DeMaio’s pass is Maryland’s commitment to selflessness, a tenet that starts on the practice pitch and reveals itself every time the Terps step onto Capital One Field. With a flick of his stick, DeMaio displayed just how flashy and rewarding sharing the ball can be.

“They’re a great group,” coach John Tillman said. “They’re really unselfish on and off the field.”

Maryland’s altruism was evident from the jump against the Panthers, a game in which they scored 23 goals on 15 assists. Wisnauskas had six goals, each of which came from a set-up.

“It’s kind of easy playing with those guys, you just move off of them,” Wisnauskas said. “They see the game as you see it.”

The ideology starts in the locker room, though, with Tillman often opting for experience and continuity in the lineup, especially early in the season. Newcomers frequently receive limited minutes — a challenge for players who have spent most of their lacrosse careers at the top of recruiting boards.

But as the wins begin to pile up and players familiarize themselves with their role on Tillman’s squad, the significance of selflessness becomes apparent.

“You come from being top dog to being the low man on the totem pole,” midfielder Roman Puglise said. “It takes time. A lot of the greats that have played here didn’t play for one, two, three years.”

It extends beyond leading goal-scorers DeMaio and Wisnauskas, though, flowing through to players such as attackman Kyle Brickerd — a member of the scout team who masqueraded as High Point’s Tewaaraton nominee Asher Nolting in practices leading up to Saturday’s game.

The junior’s enterprise left an impression on Maryland’s backline, who held Nolting to one goal — a far cry from the 2.75 goals per game he averaged in 2019.

“We had a couple scouts guys really step up into a big role,” midfielder Bubba Fairman said. “Kyle Brickerd was wearing No. 32 for scout, and I thought he was giving our defense a great look.”

Brickerd’s contribution to the Terps’ victory encapsulates the mentality that lingers across the program. Simply put, it doesn’t matter who scores or who gets the national plaudits.

“The vibes are really positive right now,” DeMaio said. “No one really cares about the stats or who gets the goal or the assist. It’s more about getting those hockey assists and keeping the ball moving. As long as it goes into the back of the net, that’s all that matters.”

So while it was DeMaio who had his assist immortalized on ESPN, the inklings of the move started when he first arrived in College Park — the byproduct of an institutional dedication to selflessness.

And given Maryland’s dominance on Saturday, that perception should continue long into the future.