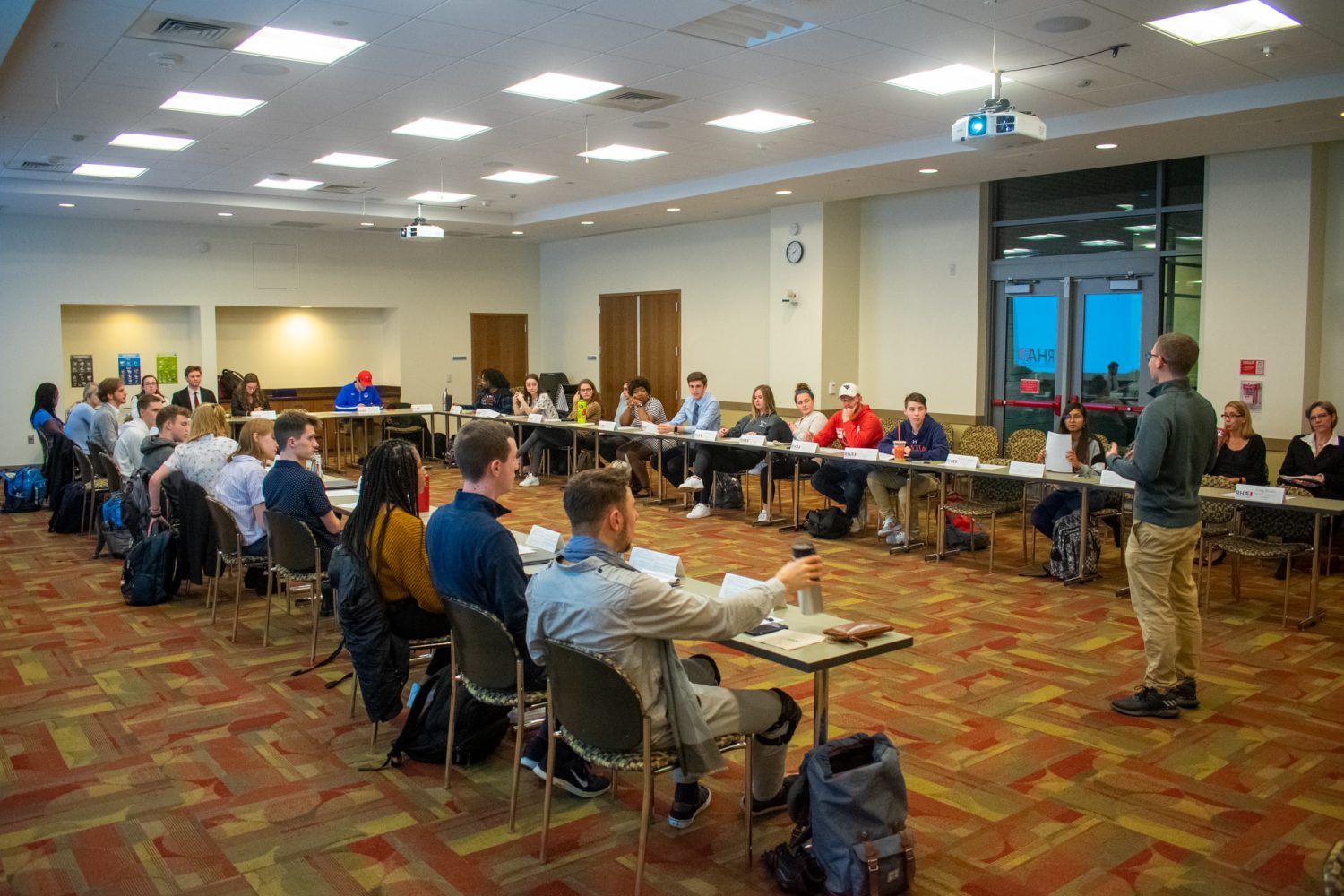 The RHA met on Feb. 4, 2020 to discuss various issues, including the election of a new Vice President and the yearly housing and dining budget. (Elliot Scarangello/The Diamondback)

Schlaich beat out two other candidates for the position. Residence Hall Association senators conducted the vote in private and declined to share the tally — a choice President Emily Berry said was to ensure senators felt comfortable to “say their piece” during debate.

“We don’t want anything impacting their ability to speak freely,” she said. All senate sessions are open, with the exception of the deliberation period for vice presidential and presidential elections.

The special election came after the group’s former vice president, Julian Chiveral, stepped down from the position before the beginning of the semester, citing personal reasons.

Schlaich said his priorities as vice president will include focusing accountability on the executive board, providing support for RHA members, emphasizing collaboration among residence hall councils and working to establish RHA’s voice in discussions surrounding student health and wellness initiatives.

During his opening statement to the senators, Schlaich stressed his extensive experience in the group. He joined the RHA during his sophomore year and has served as a South Hill Area Council senator, senator-at-large and administrative officer during his tenure.

“I have an idea of what works well in the senate and what doesn’t work well,” he said.

Schlaich also emphasized the importance of improving the accessibility of senate debate — he said he’d like to make it easier for people to jump in and speak their minds.

“I don’t want them to be stopped by procedural red tape,” he said.

Bel Air, Chestertown and Cambridge council senator Mel Mader and senator-at-large Quintin Harry were also among those who ran, presenting distinct agendas when articulating their hopes for the remainder of the year. Both Schlaich and Harry ran unsuccessfully in the previous vice presidential election as well.

Mader, a freshman, emphasized the need to empower RHA members and senators unsure about the potency and impact of the body’s legislation. She said she’s always been told that RHA bills had no power, and that the university does not have to pay them any mind. However, after a town hall held last semester, she said she realized just how crucial they are in representing what students care about and find important.

A self-proclaimed “green” candidate, Mader said her status as a freshman offered her a fresh and unique perspective. She also noted that freshmen represented the largest on-campus housing group.

“Anytime there’s a new perspective, it’s [from] someone who hasn’t been bogged down by ideas of other people, ideas of the past,” she said.

Alternatively, Harry, a sophomore philosophy, politics and economics major, focused their attention on addressing the lack of diversity within RHA. They noted the group and its executive board is largely white — of the 12-member board, only two are students of color.

Walking into an overwhelmingly white space has the potential to be uncomfortable for students of color, Harry said — the group’s limited diversity was the first thing their friend noticed when they joined the organization last week.

“When we’re looking at filling vacancies, we have to look into that,” Harry said.

Moving forward, Schlaich doesn’t have long before the senate holds elections in early April — but that hasn’t dampened his optimism for the months ahead.

“Even though I only have a couple of months in the position until we move onto a new executive team, I’m excited to see what kinds of things I can accomplish in the next couple of months,” he said.