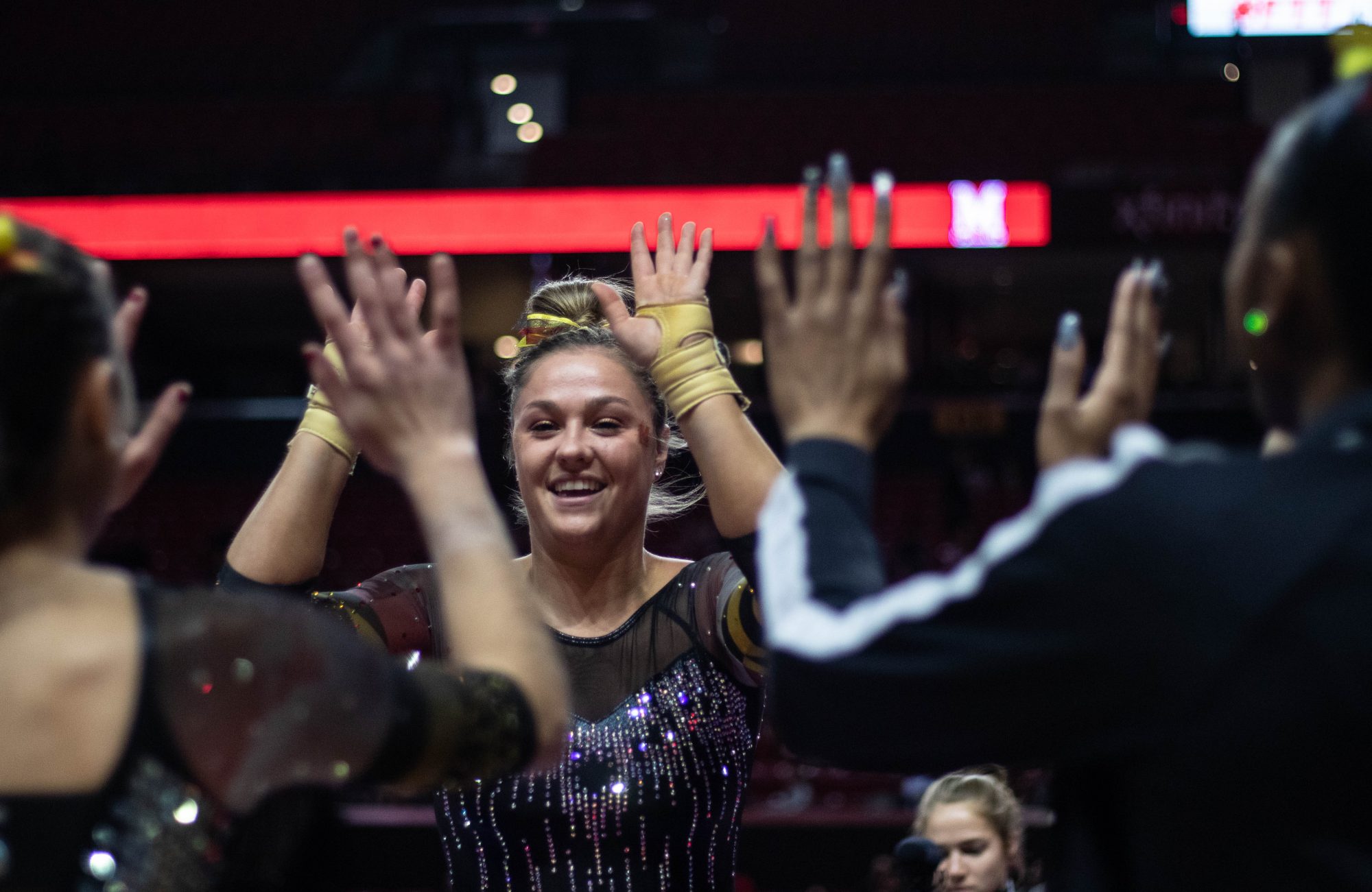 Before Alecia Farina hopped back up on the beam to finish her routine, she pursed her lips in clear frustration over what would be the lowest score of her career in the event.

But she got back on beam and finished the event regardless, wobbling once more yet sticking her landing. In a way, the senior’s performance on beam was a reflection of the way Maryland gymnastics performed as a whole at the Ohio State Tri on Saturday.

There were missteps here and there, dropping the Terps’ overall score below 196 for the first time so far in what has been an otherwise impressive start to the campaign. But like Farina, No. 19 Maryland rebounded from a few disappointing displays, finishing off with a season-best 49.250 on vault.

Even with the inconsistency, coach Brett Nelligan’s squad has proven its ability to overcome difficult rotations early on — most recently with the triumph in the final event on Saturday.

“We had a rough rotation on beam, and they respond with strong rotations on floor and vault,” Nelligan said. ”It was the best vault routine of the year. … I was proud of the way they handled a tough situation.”

[Read more: Maryland gymnastics falls to No. 19 after dipping below 196 for first time this season]

Junior Audrey Barber and sophomore Alexsis Rubio led the way with matching 9.9 scores for the Terps, who jumped to No. 12 in vault despite falling eight spots in the national standings.

And Farina returned with a 9.85, reinvigorated by her team’s desire to finish the meet on a high note.

“No matter what happened, we were just looking to go six for six on floor and six for six on vault,” Farina said. “We wanted to end the meet having fun, and I think we were able to do that.”

Maryland’s approach in the gym this week hasn’t changed much to address the meager rotation on beam. Instead, Nelligan’s squad has confidence that it can put a poor beam display in the past, as seen in the way the Terps recovered to finish second ahead of Central Michigan.

Throughout the 2020 season, Maryland has seen its scores on beam steadily slip from the heights of its 49.025 in the team’s season-opening meet. But the Terps feel the depths of their 48.075 doesn’t represent their skillset in the event.

So rather than focusing on a blip in scoring on beam, Nelligan and his squad look to how they responded — particularly with a season-best on vault two rotations later.

“It’s not about the adversity, it’s about what you do with it,” Nelligan said. “It was a tough road environment, they had a couple of tough rotations, but they handled it all really well.”