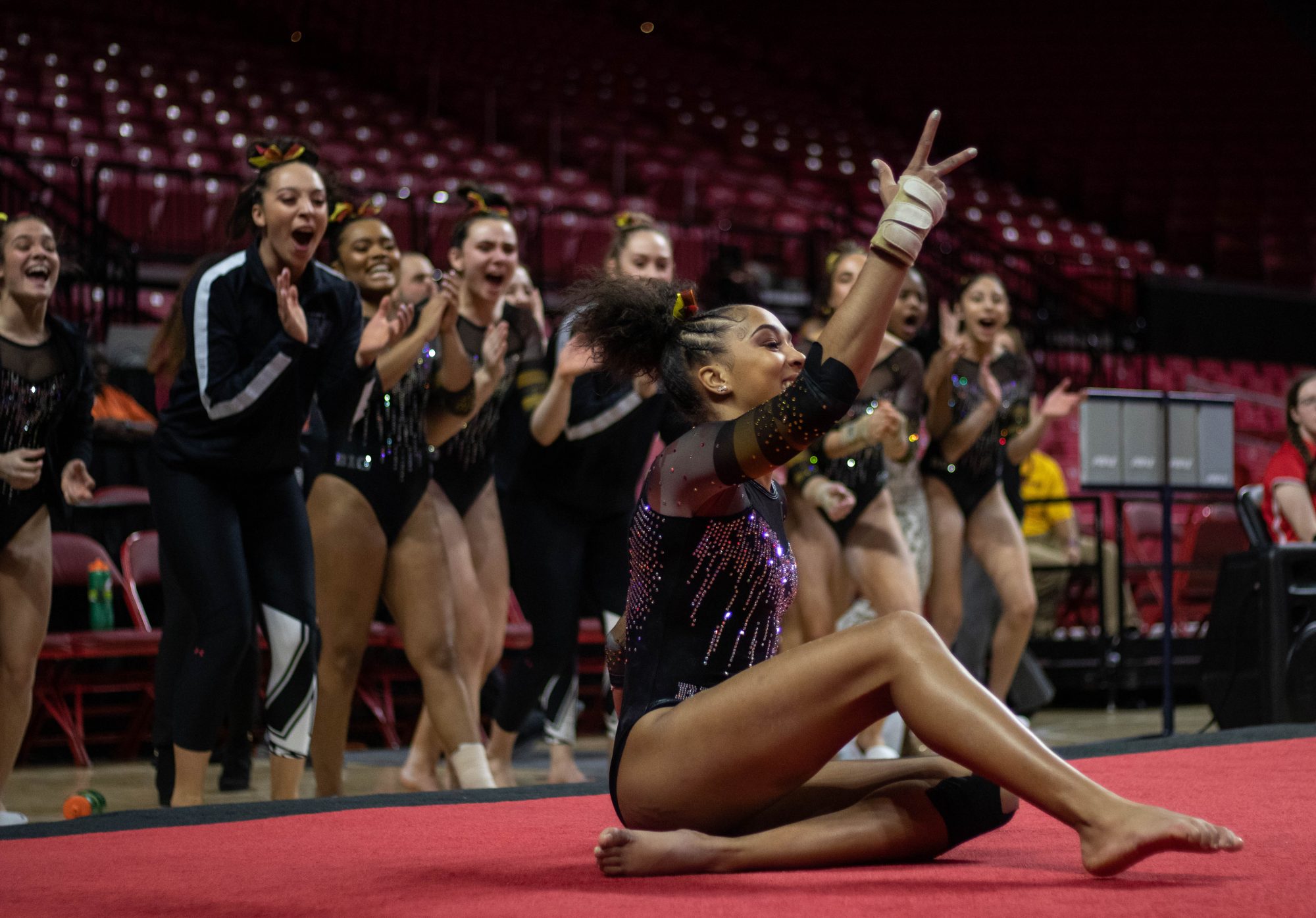 Entering the day, Maryland gymnastics had hit on all 48 of its routines in two meets. But on Saturday as the team faced Central Michigan and Ohio State in Columbus, that streak ended.

Senior Alecia Farina scored an 8.7 after falling on beam, forcing the Terps to count senior Kirsten Peterman’s 9.075 en route to a season-low 48.075 in the event.

So despite posting 49-plus scores on vault and bars, Maryland failed to reach 196 for the first time this season, beating Central Michigan but falling to Ohio State on Saturday with a 195.25.

In the first rotation, Maryland put up a 49.125 score on bars after another strong routine from junior Audrey Barber and a stick after a double back from senior Tiara Wright.

Wright followed that with a 9.8 on beam, and Barber brought the team back up with a sharp routine of her own, ending the pass with a perfect stick after her double full twist.

Ohio State’s freshmen performed well despite the team’s loss against Michigan State in its last meet, taking the lead after the first rotation and never surrendering it. Freshman Alexis Hankins pulled out a triple pass on the beam for the Buckeyes after two 9.8’s from the competitors before her, scoring the first 9.9 of her college career and finishing first in the event.

By the second rotation, the Terps trailed the Buckeyes by 0.55, with the Chippewas only three quarters of a point behind that.

After performing an exhibition on beam, Emma Silberman shined on the floor with a 9.8, executing a solid, powerful front handspring double full with only a small step at the end of her last pass. Sabriyya Rouse followed, transitioning her passes with dramatic flourishes while finishing with a sky-high roundoff back handspring double tuck.

Floor was one of Barber’s less impressive events this meet with her final pass slightly frog-legged, and she ended floor with a 9.750 just as she did with the beam.

But Barber made up for it on vault, where she earned a 9.9. And sophomore Alexsis Rubio matched Barber’s mark, helping the Terps earn a season-high 49.25 in the event.

Maryland’s 195.25 is a step above the depths the team could sink to early last season, but with wobbles from Peterman and a fall from Farina, issues on beam played a role in coach Brett Nelligan’s squad’s worst performance so far this campaign.