Audrey Barber shines on bars and floor, powering Maryland gymnastics to 196.125 vs. Iowa 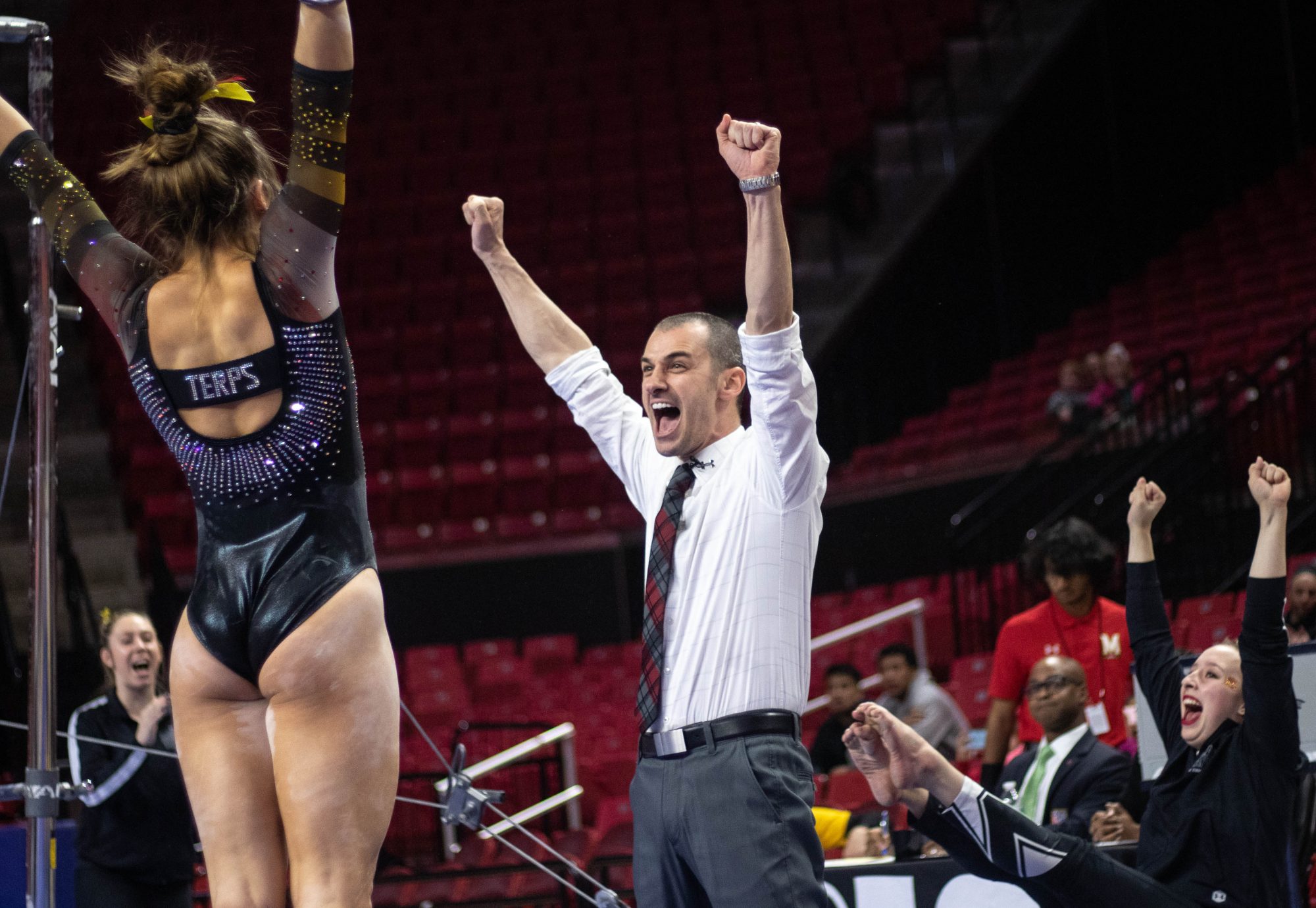 Without a budge or waver, junior Audrey Barber’s feet landed directly in the center of the mat following her uneven bars routine. The perfect dismount concluded a near-perfect event, as Barber posted a career-best 9.950 on bars, helping Maryland gymnastics to a season-best 49.275.

The junior from Temple Hills continued to set personal-bests on Sunday, earning a 9.925 on the floor to punctuate another strong showing for her team early in the year.

In their first home meet of the season, the Terps went back and forth with Iowa, ultimately securing a victory over the Hawkeyes (196.125-195.675) due in large part to Barber’s two 9.9-plus scores. The win marked the first time the program has scored 196.000 back-to-back to open a season.

“I’m really impressed with my team,” coach Brett Nelligan said. “They were forced to put up hit after hit after hit on floor, and I think we grew a ton today just being in that situation.”

Maryland didn’t start its first home meet in a perfect way, however. The team opened on vault — the same event they finished with the previous meet — but they struggled to replicate the success they had in the event on Jan. 11.

Sophomore Alexsis Rubio helped buoy her team in the end when she notched an event-high 9.775 for the Terps. They totaled a score of 48.725 for the rotation, falling behind the Hawkeyes early.

“We were a little tight on vault, and you could see it in our landings,” Nelligan said. “After vault, I said we need to settle down and do the gymnastics we know how to do.”

After a strong showing on the bars, Maryland led Iowa 98.000-97.775 at the halfway point. Nelligan’s squad would need to feed off that momentum on the balance beam to remain in the lead.

But only one Maryland gymnast competing on the beam scored above a 9.800, and the Terps posted a 48.850 in the event. The bright spot was senior Tiara Wright, who executed a gainer pike dismount for a 9.825 score.

“It feels good knowing that all the work I’m putting in at the gym is paying off down on the competition floor,” Wright said.

Maryland was forced to finish the meet with the event that brought down their scores the most at the Little Boston Invitational: floor exercise. Freshman Aleka Tsiknias wasn’t fazed, though, as she opened up the rotation with a 9.850.

And to close the floor event, Barber — the Terps’ only all-around competitor — set another career-high with a 9.925. Barber’s new record marked the 48th hit out of 48 routines to start the season for the Terps, who have now scored over 196 in two straight meets — a feat that they didn’t accomplish last season until March.

“Audrey was laser-focused the whole time,” Nelligan said. “It was a lead-changing battle that entire last rotation, and that’s where I’m most proud of the team.”