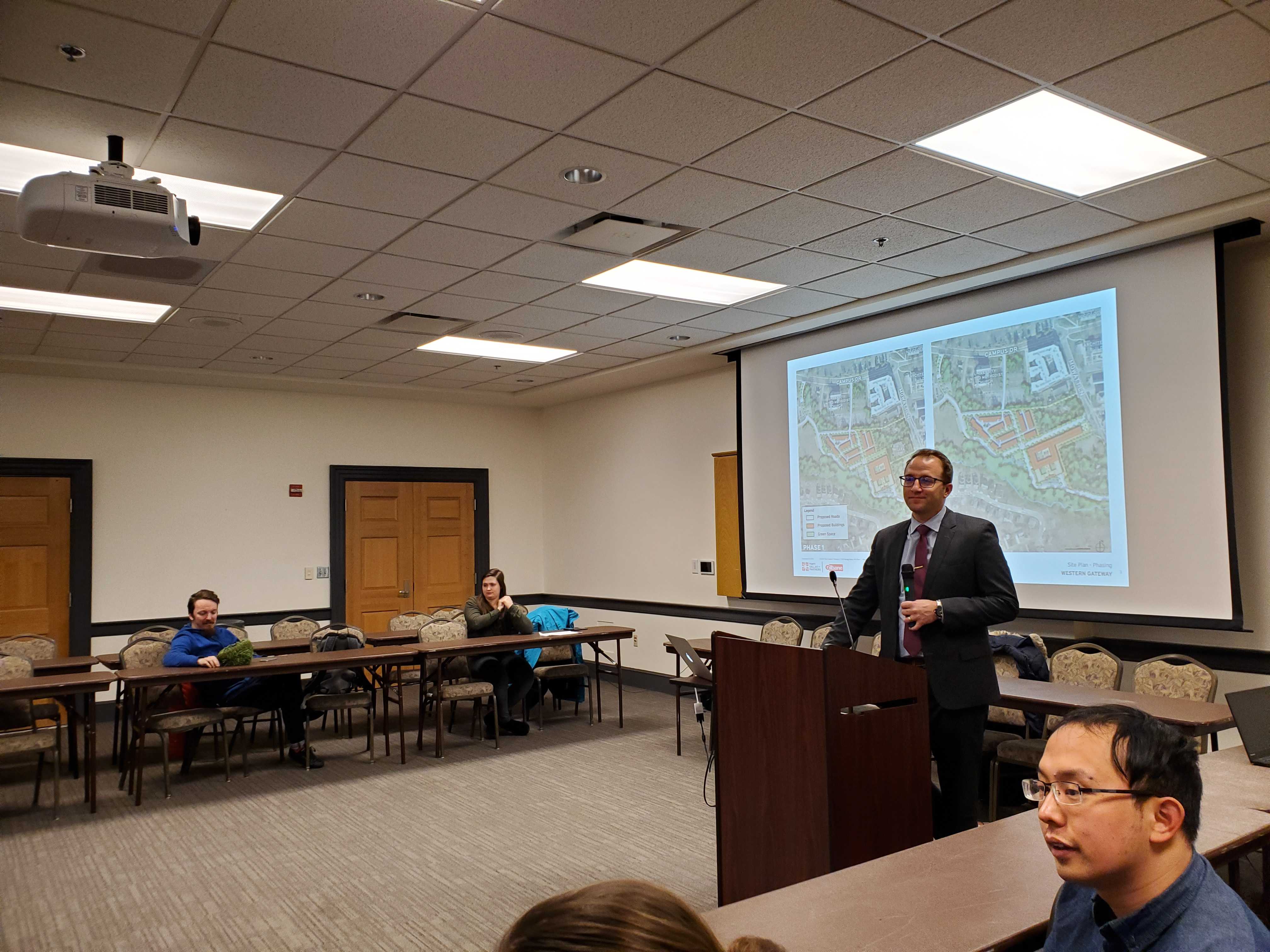 In the Gilbane Development Company’s latest effort to include graduate students in its design of a new housing community, the development director spoke with GSG representatives after their Monday meeting.

Currently, rent at Graduate Hills and Graduate Gardens — the university’s only graduate student housing — ranges from $1,227 to $1,735 per month. Considering that a graduate assistant working a 9 ½ month position earns a minimum stipend of $18,791 per year at this university, keeping up with that cost could be difficult for some.

Annie Rappeport, president of the Graduate Student Government, has been encouraged by Gilbane’s attempts to garner feedback from her constituents.

“It’s really promising how much this particular group has really wanted to listen to people that they’re building something for,” she said.

In his presentation, Cerria provided an overview for what Gilbane has planned for the “Western Gateway Project,” which will be situated behind the Hillel Center and close to the Domain apartment complex.

The community will cover 17 acres and include 300 units of graduate student housing and 81 townhouses.

To keep prices low, Gilbane has been considering a number of cost-cutting ideas. On Monday, Cerria described the company’s plan to offer a number of “co-living spaces,” where students could rent out a small room equipped with a bed and bathroom and share an open kitchen space with 16 other individuals.

Cerria also announced what the company is planning to offer as the community’s lowest rent: $850 for a single co-living “pod.” A two-bedroom apartment at the complex is planned to come to around $250 less than such a unit at Graduate Hills and Graduate Gardens, he added, emphasizing that the prices are still subject to change.

“We’re trying to be as affordable as possible,” he said. “We would love to have it for free, but we need to still build the project.”

Additionally, the development company plans to set aside a small portion of the property as retail space, making room for either a restaurant or coffee shop, said Cerria. The community is also planned to include lots of walking trails and green space, as well as an underground parking garage.

Although only a handful of representatives stayed after the meeting for Cerria’s presentation, the few that remained had lots of questions. They asked about the amount of sunlight that will filter through the rooms’ windows, how Gilbane is planning to encourage community among its residents and how a co-living space would be set up.

Cerria explained that pods would only include the bare essentials — a bed, bathroom, small refrigerator, cooktop, closet and storage space. Ideas for their design emerged from discussions held by focus groups, he said, where students said they’d be willing to compromise on having certain amenities if it meant paying less money per month.

But one representative, Laura McBride, pointed out that going by the company’s planned rates, it would be about $100 cheaper for a student to split the cost of a two-bedroom apartment with a classmate than to rent a pod.

“To me, the co-living would not sound attractive unless it would be cheaper than splitting an apartment,” she said.

Cerria, however, thought differently. Some students would likely be willing to pay extra for the added privacy living in a pod would offer and for the added convenience of not having to track down a roommate, he said.

He emphasized that the presentation wasn’t the end of Gilbane’s discussion with graduate students — the company plans to spend the next year gathering more feedback and tweaking its design.

It has also hired a third party to conduct a market study on the graduate student population, and is planning to distribute a survey in the coming month to further gauge what graduate students look for in a living space.

“We hope that [the market study] looks at all the national players and who we’ll be competing against from a university perspective,” Cerria said. “How do we attract the brightest and best faculty, staff and graduate students? What do they care about? That’s what we’re after.”