For Maryland basketball, having Jalen Smith protecting the rim is a “luxury” 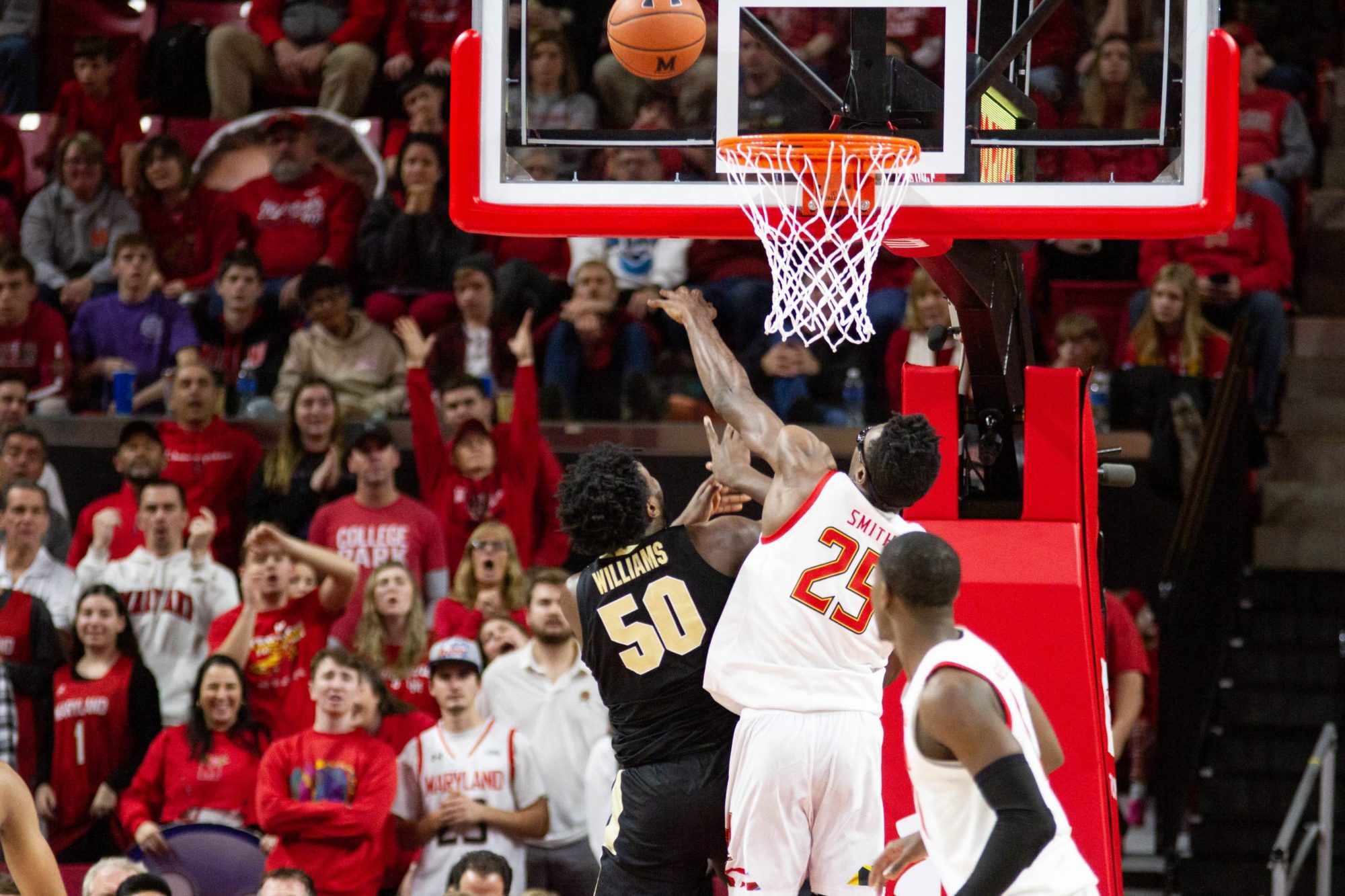 Going into Saturday’s matchup against Purdue — with its pair of imposing low-post presences — Maryland men’s basketball planned to double-team whichever Boilermakers big man was on the floor to supply forward Jalen Smith with defensive help when the ball entered the paint.

But as the game wore on, and Smith faced isolated defensive responsibilities on either the 6-foot-9 Trevion Williams or 7-foot-3 Matt Haarms, the Terps’ forward proved he was up to the task in one-on-one scenarios. So, coach Mark Turgeon altered his game plan and trusted Smith to get stops on his own.

In the final six minutes of the game, when Purdue was in desperate need of a field goal, Smith continued to stand his ground inside and force difficult shots. By holding Purdue’s interior duo to a combined 12 points on 6-for-14 shooting, Smith’s defense helped lead No. 17 Maryland to a 57-50 home win.

The outing was another example of Smith embracing the role of the Terps’ premier interior defender after mid-season roster turnover in December. Since then, he’s settled into that defensive role and become a valuable commodity for his team in a competitive Big Ten conference littered with standout big men.

“He went head up on those kids, used his length, stayed down, his timing was terrific,” Turgeon said. “It’s a luxury.”

Ahead of the season, Turgeon didn’t expect the 6-foot-10 Smith to be defending the center position as frequently as he is. Smith was supposed to play the power forward position — the same spot he played last season when he paired with forward Bruno Fernando.

Despite Fernando’s departure to the NBA, the Terps were equipped with the necessary reinforcements to keep Smith at the four with interior-minded freshmen forwards Makhel and Makhi Mitchell able to play the five.

That all changed in late December when the Mitchell twins left the program to explore transfer options.

“All summer, [Smith] was going to be our four — our team looked totally different than it does now. And he’s had to do it, and I think he had to accept it,” Turgeon said. “He’s accepted it.”

In many ways, Smith is a stark contrast from the player Turgeon had defending the paint last season. Smith won’t frequently goad the crowd for more noise after a game-changing play as Fernando did, and emphatic blocks into the stands aren’t near as frequent.

But when Smith is defending in the post, there are glimpses of Fernando’s defensive presence. The Baltimore native uses his added muscle — which packed on 10 pounds to his once-slender build — to hold off bigger players and he utilizes his timing to block shots.

“It was a huge step because, last year, Bruno took all the big men,” Smith said. “I learned from him and just use what he did [in] my game now.”

[Read more: Aaron Wiggins is back in form for Maryland basketball since coming off the bench]

Guard Aaron Wiggins saw Smith take the matchup against the Boilermakers personally. In a media timeout, Smith proclaimed in the team huddle that he’d take care of the big men and preclude them from getting offensive rebounds; he just needed the guards to secure the board.

Fending off Purdue’s big men was no small measure, either. Smith has added muscle to get to 225 pounds, but doesn’t have the same size as Haarms’ 250-pound build or Williams’ 270-pound frame.

“It’s just a mindset. I’m going in, I’m giving up about 25-30 pounds on each big man in the Big Ten,” Smith said. “Turgeon just tells me to just go in and fight my hardest, and that’s what I do every night.”

Smith’s value on the defensive end can’t be understated, especially in the Big Ten. Turgeon said, following the Purdue game, that he’s never seen a conference have so many skilled post players in his 32 years of college coaching.

Iowa’s Luka Garza and Minnesota’s Daniel Oturu, who both stand at least 6-foot-10, lead the Big Ten in scoring. Three other post players are top-10 scorers in the conference.

In a league loaded with menacing interior players, Smith’s showing against Purdue’s pair of big men — who entered Saturday’s game averaging a combined 21.8 points — is just what the Terps need going forward.

“That’s something that we need [Smith] to do every game,” forward Donta Scott said. “Seeing [him] really get down there and do what he [does] best.”