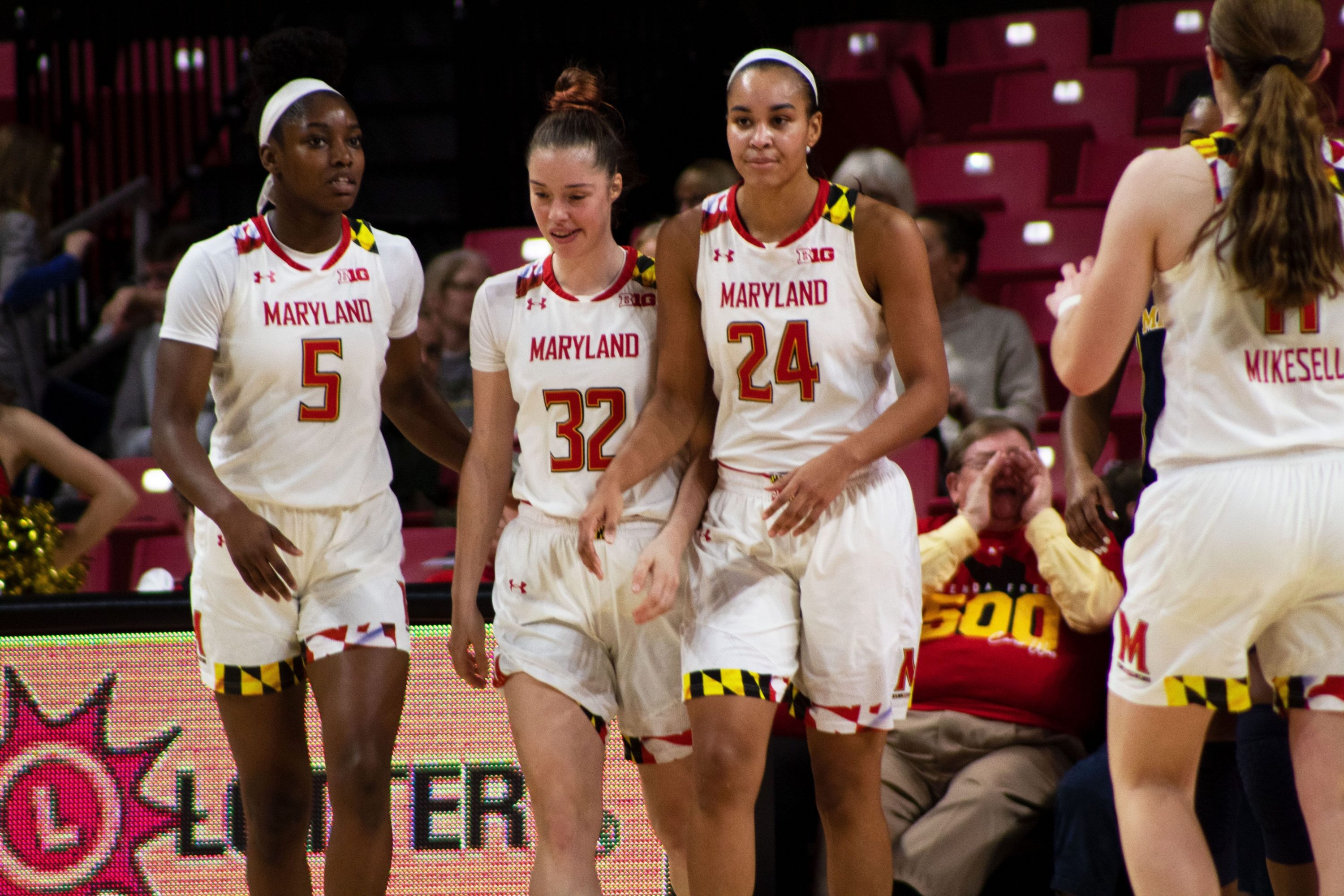 Guards Kaila Charles and Sara Vujacic and forward Stephanie Jones walk across the court during a stoppage in Maryland’s 83-69 win over Michigan at Xfinity Center on Jan. 12, 2019. (Frances Moyonero/The Diamondback)

When Lindsey Pulliam swiped a cross-court pass from Taylor Mikesell and took it the length of the court for a pull-up jumper, Northwestern caught an early glimpse of what would work all day against Maryland women’s basketball.

Pulliam and the Wildcats had the Terps indecisive, hesitant and sloppy from the opening tip, going on a 14-0 run midway through the opening period by giving Maryland a taste of its own medicine with dogged defense leading to 29 points off turnovers by the final buzzer.

Behind Pulliam’s 24 points and a career-high 23 from Veronica Burton, Maryland lost to Northwestern, 81-58, on Tuesday. The Terps stumbled with season-highs in turnovers (24) and fouls (26), as well as their second lowest point total.

“Disappointing for us. I don’t think we responded well on the road [in our] first conference game,” coach Brenda Frese said. “[We] turned the ball over way too many times and put ourselves in a difficult hole that we had to climb out of.”

With Maryland not hitting jumpers early, the Wildcat zone had the team indecisive when attacking. The Terps often used most of the shot clock to try and find an open look, but they frequently came up empty and let up scores on the other end.

Pulliam, Northwestern’s leading scorer at 18.7 points per game, caused all sorts of problems for Maryland early. Her seven first-quarter points outscored the entire Terps’ scoring output from the opening 10 minutes, and Pulliam added two steals during the frame that lead to easy baskets.

Down 12 and having scored just six points in the first quarter on 20 percent shooting, coach Brenda Frese’s squad made adjustments, making crisper passes to open areas in the Northwestern zone to start the second period.

Her team found better shots and knocked them down for 17 points in the frame, but seven more turnovers prevented the Terps from cutting the deficit to fewer than 11 at halftime.

Despite the poor offensive showing to start and only forcing Northwestern into five giveaways in the half, a plus-19 rebounding advantage kept Maryland within striking distance. The team had more offensive rebounds (13) than the Wildcats managed overall, allowing forwards Kaila Charles and Stephanie Jones to do most of their damage off second-chance shots.

Jones tried to set the tone to start the third with back-to-back scores and a steal, but just as the Terps seemed to grab some momentum, a pass from Jones ricocheted off guard Ashley Owusu’s knee and rolled out of bounds.

In addition to its continued turnover issues, Maryland couldn’t stay out of foul trouble in the third frame. Seven fouls in the quarter contributed to 10 made Northwestern free throws and forced Charles to the bench, preventing any chance of cutting a deficit that ballooned to 24 by the end of the period.

After the second straight game in which Maryland didn’t hit from behind the arc in the first three periods, guard Blair Watson finally buried one from the corner that looked like the start of a run.

While she hit two more from deep, her team committed 12 more fouls in the final period, trying to be aggressive and take risks in a desperate attempt to narrow the scoring margin. But Northwestern made 15 more free throws and kept the Terps at bay to earn the program’s first victory over Maryland after eight losses since Frese joined the Big Ten.

Maryland’s two main ball handlers, Mikesell and Owusu, shot a combined 2-of-15 from the field and tallied 10 total turnovers. Their lack of production played a part in the Terps’ offensive ineptitude and allowed Northwestern’s to almost never miss a beat.

“Northwestern was sensational,” Frese said. “They punched first and had a tremendous game plan and played extremely hard for 40 minutes.”