Kaila Charles powers No. 12 Maryland women’s basketball to 70-55 win over No. 23 Michigan 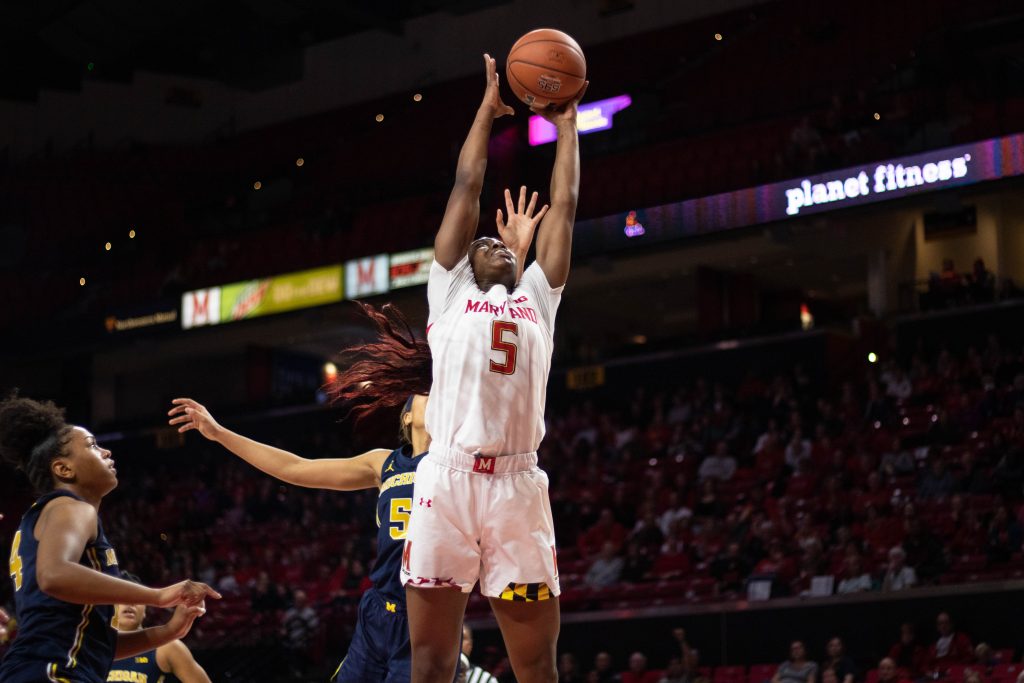 From the opening tip, Kaila Charles’ relentless effort was on full display for an energized Xfinity Center crowd.

The senior forward dashed to the rim and skied for rebound after rebound over the course of her 32 minutes on the floor. And by the final buzzer, Charles had put together her best performance of the year, notching season-highs with 23 points and 11 boards.

Her outing led the No. 12 Maryland women’s basketball team to a 70-55 win over No. 23 Michigan on Saturday night in the team’s Big Ten opener and first top-25 victory of the season.

“I thought our seniors led the way,” coach Brenda Frese said. “Obviously, Kaila set the tone from the tip. She played like the All-American that she is. It was just energy for us, making a ton of great plays.”

Michigan struggled to create much space from Maryland defenders, who looked refreshed after a 10-day hiatus. But the time-off also added some rust to the Terps’ shooters as they failed to knock down most of their perimeter attempts on the night, shooting 2-for-11 from deep.

Both teams took better care of the ball in the second frame, with Michigan guard Amy Dilk handling the bulk of the dribbling duties for her team to help fend off Maryland’s attacking guards.

But the offensive efficiency for both teams continued to plummet. The squads shot a combined 30 percent in the quarter and failed to find any rhythm as the game stayed close.

“I thought we were going to be able to handle [Maryland’s defense], but their length was disruptive and their quickness to rotate back into [position] was disruptive,” Michigan coach Kim Barnes Arico said. “We haven’t had that [many turnovers] in a real long time. … They were more effective than I thought it was going to be, and it really disrupted us for sure.”

Charles carried the load for her team, scoring 13 points and grabbing six rebounds in the first half despite her team shooting just 32.3 percent from the field and 0-of-7 from behind the arc.

Behind her leadership, Maryland held a six-point lead and a plus-seven rebound advantage at the break.

The third quarter began the same as the previous two, with Charles giving the Wolverines all they could handle but neither team holding a lead of more than a few points.

But after the preseason All-American exited midway through the frame with three fouls, it was forward Shakira Austin who buoyed the Terps. She scored on three straight possessions, using crafty reverse layups and strong putbacks to help her team hold a four-point lead entering the final 10 minutes.

“It was a huge spark for us. Gave us great confidence,” Frese said. “That was the toughness that Shakira’s been playing with in practice in the last two days. We need to continue to have more of that.”

With the game still hanging in the balance, a fresh Charles returned to the floor to help her team finally seize control of the game and extend the lead to double digits.

She quickly scored two buckets and found forward Faith Masonius for an easy fastbreak look on off a slick bound-pass, igniting the crowd the seizing the game’s momentum in the process.

“Before the game and shoot around, coach gathered all the seniors and basically said that we need to set the tone from the tip every single game,” Charles said. “So I just made it a conscious effort to have that great energy, have effort to bring the team along and just be a good leader, so that’s what I kind of focused on.”

After an 0-for-18 start from behind the arc for both teams, guards Taylor Mikesell and Blair Watson put the game out of reach with a pair of three-pointers late in the fourth. While Maryland struggled from deep, it made up for it on the glass.

With a combined minus-40 rebounding margin in her squad’s previous two ranked matchups, Frese had former Terps Alyssa Thomas and Brionna Jones come to practice in the days prior to the game to prepare her team for the physicality of Michigan down-low.

It paid dividends as Maryland finished plus-eight on the glass and had 15 second-chance points. The commitment to finishing each possession made all the difference and had Frese smiling when the game came to a close.

“I’m proud of our toughness … love the fact that our defense and our rebounding were just consistent in a game like this,” Frese said. “That’s what you’ve got to be able to have as a great team … we can control that every single night. I thought our effort was sensational.”