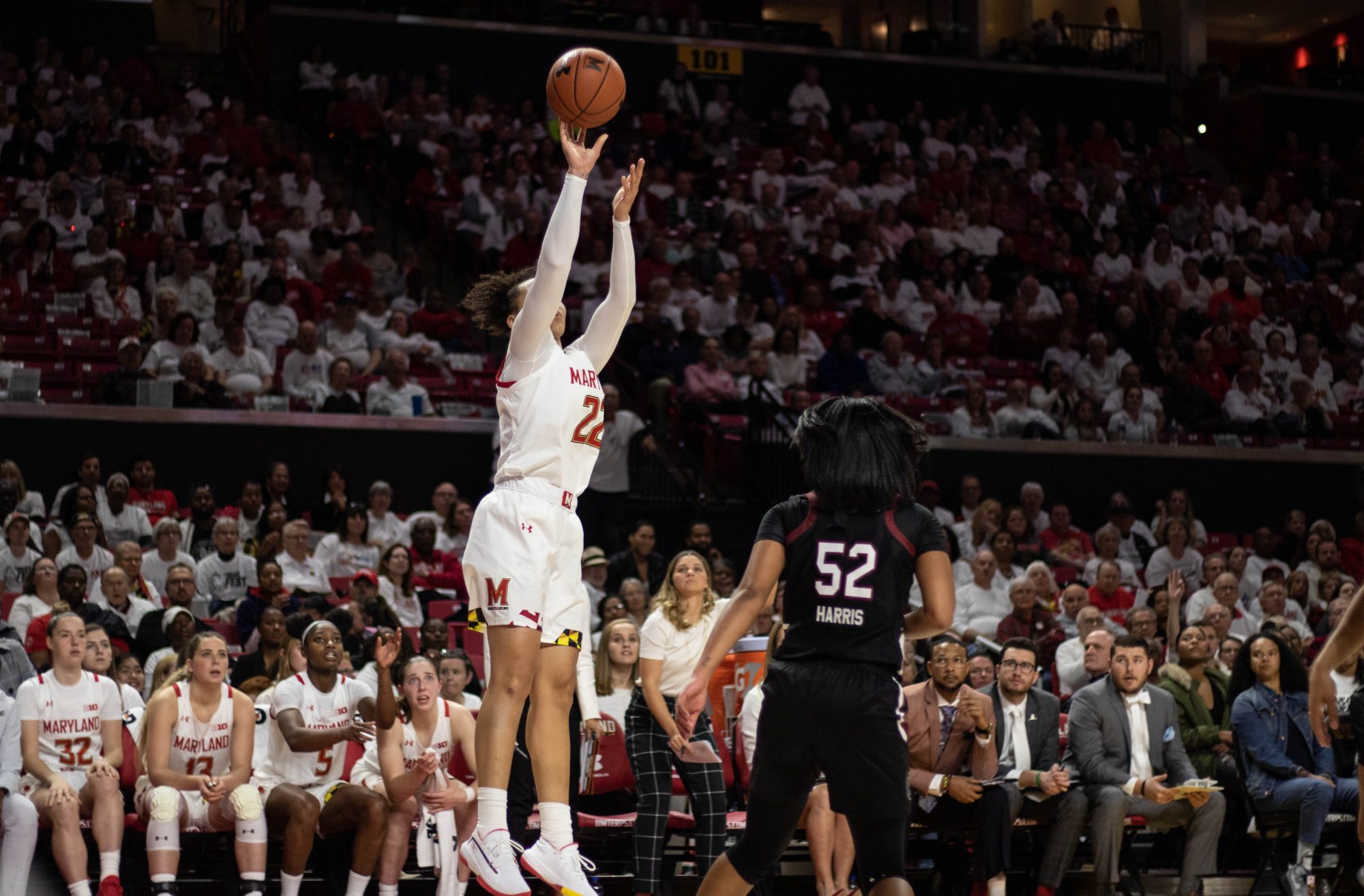 When a smaller Georgia State guard tried to sneak a shot by Maryland women’s basketball’s defense early in the opening period, Shakira Austin had other plans.

The 6-foot-5 forward rotated to help on the driving Panther and emphatically swatted the attempt toward the streaking Kaila Charles, who then drove the length of the court before throwing a bounce-pass to a trailing Blair Watson for the easy layup.

That sequence set the tone in a complete team effort for the No. 13 Terps, as they went on to defeat Georgia State, 114-41, on Wednesday, notching 29 assists on 42 made shots.

“I thought it was our most complete game up to date,” coach Brenda Frese said. “[It was] a direct reflection of the week of practice we had going into this game.”

Coming off a 10-day hiatus for final exams, the Terps played arguably their best game of the season and set season-highs with 15 made triples, 22 steals and 22 offensive rebounds. It was also the first time this year that three players earned double-doubles.

Maryland was led by Watson, who put up 23 points for her best performance since her sophomore campaign. She set new season-highs in the first half alone, knocking-down six 3-pointers and scoring 20 points.

The Terps came out firing in the first quarter with Watson and guard Taylor Mikesell each hitting three shots from behind the arc, abusing a lackluster Georgia State 2-3 zone en route to an 18-point lead.

All 10 of Maryland’s makes in the period were assisted. Frese’s squad often found open looks by penetrating the zone and kicking out to open shooters or executing quick swing-passes to find the hot-hand from long range.

With the game already in Maryland’s control, Watson continued to let it fly from deep, hitting three more triples in the second period as the Terps extended their lead to 40 by halftime.

Although her team got sloppy at times in the frame, committing seven turnovers mostly off miscommunication and sloppy dribbling, Watson’s six first-half steals often led to easy looks on the other end and demoralized the opposition.

While the Terps’ 3-point shooting cooled off in the third period, Austin began to impose her will. She did a little bit of everything on both ends, anchoring the defense and creating easy shots for either herself or her teammates as the Terps continued to pile on.

Austin made good use of her significant size advantage and recorded her second-straight double-double. She also stuffed the statsheet with four assists, four steals and four blocks.

A 55-point lead heading into the final frame allowed Frese to deploy the reserves for most of the period. Forward Faith Masonius, who struggled to find a rhythm early, played all 10 minutes and shined alongside guard Diamond Miller as the two combined for 15 points.

It was a dominating victory in all facets for the Terps as they recorded their second-straight triple-digit scoring effort and the fourth of the season.

In addition to Watson, the all-around effort was highlighted by Mikesell’s career-high seven made 3-pointers and a continued focus on the glass that helped Maryland to a plus-24 rebounding advantage. Now, the focus will be on replicating the performance as Big Ten play gets underway.

“I’m really pleased with the 40-minute game,” Frese said. “That’s what you want to see going into conference play … playing both on the defensive and offensive end of the floor.”