Taylor Mikesell dangerous from deep in No. 9 Maryland basketball’s win over Loyola, 105-45 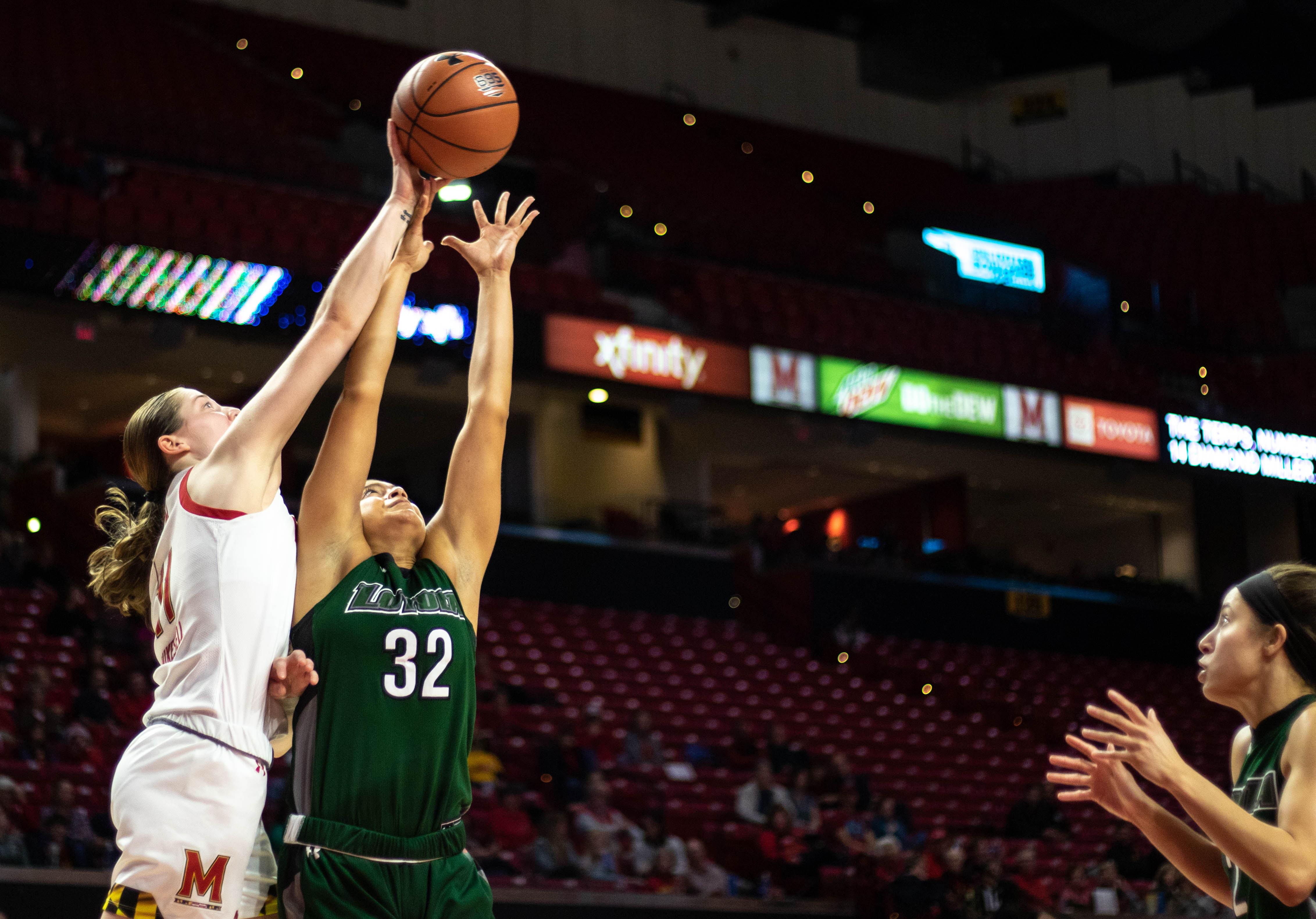 With the game already out of reach, guard Taylor Mikesell let it fly from deep one last time, burying a career-high sixth 3-pointer.

The sophomore sharpshooter put her team on her back during a slow start, steering the ship with nine first-quarter points until the rest of the squad picked up the slack.

Her 20 points helped the Maryland women’s basketball team to its eighth win of the season, beating Loyola, 105-45, on Sunday in its third triple-digit scoring effort this season.

“I just loved the response out of our team today,” coach Brenda Frese said. “Obviously after our [loss to North Carolina State], you kind of want to see what your team is made of.”

Mikesell came out firing to start the contest, hitting three triples and notching three steals in the first period, but the rest of her team looked flat.

Seven giveaways and several missed layups had the Terps holding only a 10-point lead at the end of the first over a Loyola squad with a significant height and athletic disadvantage. Maryland looked slow in its full-court trap and didn’t provide Mikesell with much support, but she did her part to put her team ahead early.

The Terps started the second frame with more intensity, as forward Kaila Charles and guard Diamond Miller both made easy layups in transition. And after Maryland began the quarter on a 10-2 run, coach Brenda Frese went to a new lineup at the 5:07 mark that opened the game up.

With center Olivia Owens still unable to play as she recovers from mononucleosis, Frese has staggered forwards Shakira Austin and Stephanie Jones’s minutes in an effort to keep her main inside forces fresh.

In this contest, however, Frese paired the two forwards together and surrounded them with three shooters in Mikesell, guard Sara Vujacic and forward Faith Masionus. The new combination immediately jelled as Vujacic hit a wide-open corner triple on its first offensive possession.

The grouping erupted for 20 points in the quarter’s final five minutes and helped hold the Greyhounds scoreless for nearly eight minutes until letting up a pair of easy layups in the final 90 seconds.

“Every game is different, but it’s a lineup that I thought tonight gave us great energy,” Frese said. “When you can see [Austin and Jones] playing off of each other I think is big … today we were not in foul trouble so we were able to play both of them together for longer periods of time.”

The Terps built on their 33-point halftime lead in the third, getting almost any shot they wanted in the paint en route to 30 points on 59.1 percent shooting.

Jones in particular dominated in the paint, scoring nine points and making all four of her shot attempts in the quarter — including an and-1 that extended the lead to 49.

Loyola never stopped fighting, though, and was winning the fourth quarter by six points through the first few minutes before Austin regained focus and put her stamp on the contest.

The 6-foot-5 sophomore scored 11 in the final period, punishing smaller Greyhound defenders on her way to a career-high 25 points and 13 boards, notching her first double-double since the team’s opening win over Wagner.

“It’s fun when [Stephanie and I] are both in a game with each other. We’re able to look for each other a lot and half the time they’re not able to double us because they can’t stop both of us at the same time,” Austin said. “We both have the ability to pass and to score, so it’s just fun playing with Steph.”

Coming off a battle against North Carolina State in which the Terps lost the rebounding battle by 24, Frese spent time in film sessions and practice focusing on attacking the glass on both ends of the floor.

She said Jones in particular, who was held to zero rebounds in 18 minutes by the Wolfpack, took accountability for her poor performance and wanted to come into today’s contest and right the ship.

The senior did just that and matched her season-high with six boards, as well as a team-high four steals and season-high 20 points, looking more assertive in the paint and comfortable in the offense in the second half.

“I just thought from the jump, the aggressiveness and the commitment to the glass — that was an area we really challenged the team with,” Frese said. “And I thought they had a terrific response.”

The Terps won the rebounding matchup by 31 with six players grabbing at least five boards, putting their size advantage to good use.

That effort, in combination with Mikesell’s career-high six triples, propelled Maryland to a convincing win. But for the sophomore, it was just another game in what is quickly becoming a standout Maryland career.

“You shoot a thousand shots a day, so it’s whatever, eventually,” Mikesell said. “Records get broken, but I feel like it’s the hard work every single day, coming in just being diligent, persistent every day with that routine.”