No. 13 NC State hands No. 9 Maryland women’s basketball its second loss in 66-59 outing 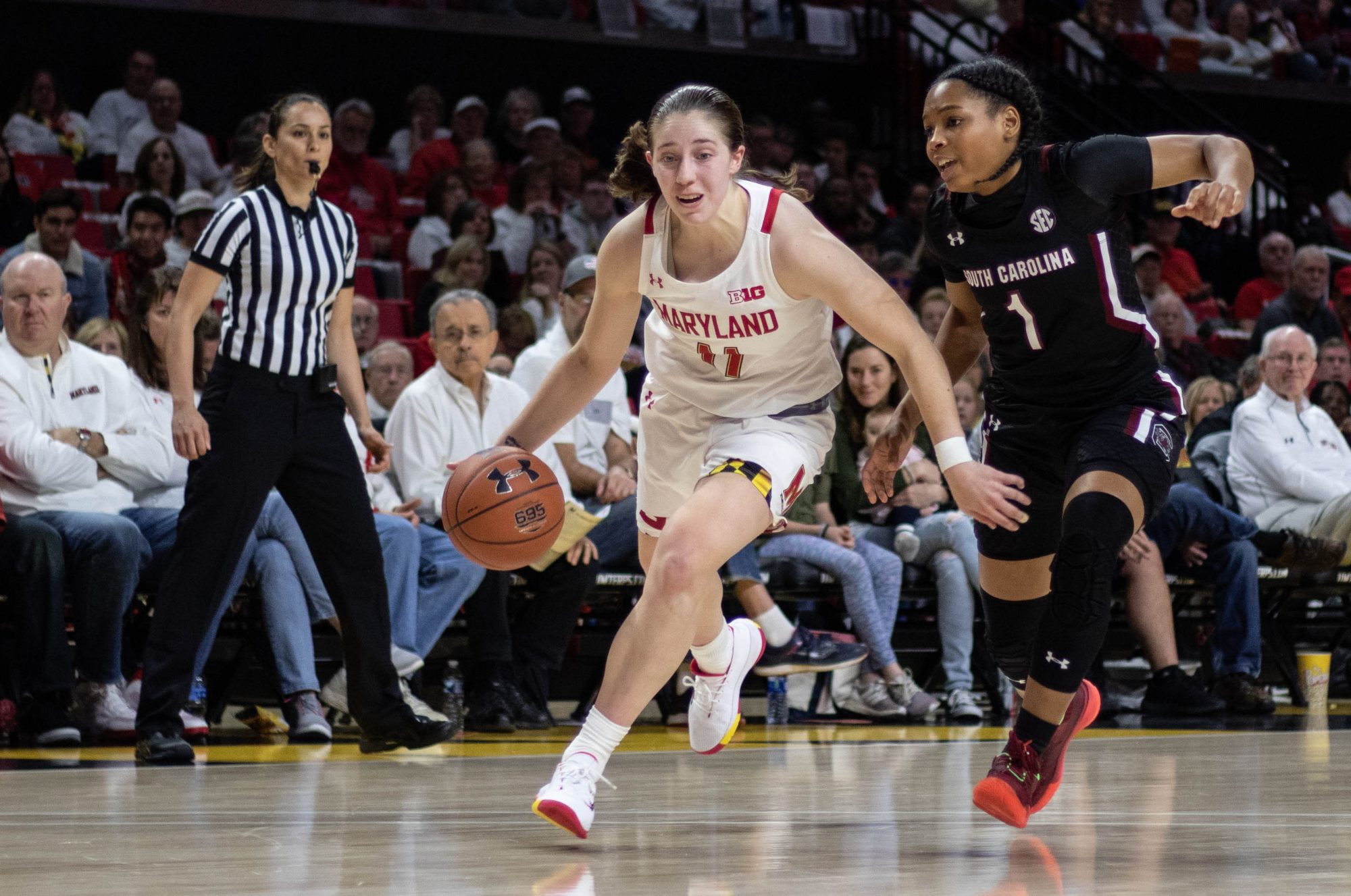 With less than three minutes to play and a four-point deficit, the Maryland women’s basketball team needed a stop.

The Terps nearly got one, too.

But after forcing a North Carolina State miss, Maryland couldn’t corral the rebound. Center Elissa Cunane could, leading to guard Kai Crutchfield’s stepback 3-pointer at the end of the shot clock, effectively putting the game out of reach.

That triple ended the Terps’ chances in their 66-59 loss to the Wolfpack on Thursday night, dropping their second top-15 matchup of the season. Maryland lost the rebound battle by 24 and shot just 34.4 percent in the final two quarters after leading by two at halftime.

“Obviously, it was a tremendous game. I thought both teams fought really, really hard. It felt like a game that was built for March,” coach Brenda Frese said. “I thought they just did a tremendous job when you talk about the rebounding that they really exposed us in, and I think our third quarter is what ultimately what did us in.”

The Terps came out of the gates firing with guard Taylor Mikesell knocking down two 3-pointers in her team’s first few possessions, a positive sign after the sophomore was held scoreless for the second time this season in her last outing.

Guard Blair Watson and forward Stephanie Jones followed Mikesell’s lead, each hitting a triple soon after. But Maryland struggled to find offense after that and finished the quarter shooting just 36.8 percent.

However, as Frese has echoed all season, defense was the focus of the first half. The Terps forced 15 turnovers in the opening 20 minutes, more than NC State’s per game average, and held the opposition to just 33.3 percent from the floor in the second quarter.

Maryland couldn’t take full advantage of many of those giveaways, though, scoring just six first-half points off turnovers. The team struggled to penetrate the Wolfpack’s ferocious interior defense but continued to force several shots, which contributed to the Terps’ 33.3 percent shooting in the half.

“I think that’s kind of been the identity we’re trying to adopt, on the defensive end just trying to force as many turnovers as we can, make the other team uncomfortable,” Mikesell said. “I think just being more aggressive off of those turnovers would be the biggest [fix] for us right now.”

[Read more: No. 9 Maryland women’s basketball imposes its will in dominating 90-26 win over Belmont]

Seven triples on 14 attempts, four courtesy of Watson, kept the Terps afloat as they held a two-point lead at the break. Meanwhile, guard Ashley Owusu went scoreless on four shots.

The Wolfpack opened the third quarter on an 8-2 run that led to a timeout by Frese, but the break didn’t help as her team’s offense continued to deteriorate. The Terps shot just 26.7 percent in the frame, with many possessions marred by over-dribbling, few passes and many missed layups.

A buzzer-beating bank shot by forward Shakira Austin provided some momentum heading into the final period, but they would have to change their strategy down seven points.

“I think they made some really strong adjustments … We struggled some when we had to move Taylor to the point for Ashley,” Frese said. “[Ashley] had a tough night compared to how she usually plays, so that impacts us when Taylor has to do so much.”

Maryland went back to its signature “12” defense to start the fourth, with guard Diamond Miller using her length and aggression to cause a pair of turnovers in the backcourt to inspire a stretch of lockdown defense for the Terps.

After playing her worst three-quarter stretch of the season, Owusu came alive for 10 points in the period. The two freshmen helped the Terps cut it to a one-point game with just over six minutes remaining, but the contest would never be that close thereafter.

Maryland couldn’t overcome a seven-point deficit heading into the final frame, especially with the Wolfpack shooting 53.8 percent from the field and dominating on the boards.

Frese said the plan coming in was to neutralize Wolfpack guard Aislinn Konig and force other guards to step up, hoping her team’s trapping defense would overwhelm less skillful ball handlers.

Crutchfield made the most of the lack of attention paid to her, scoring eight of her team-high 19 points points in the fourth. Her stepback 3-pointer proved to be the dagger, handing the Terps’ their second loss to a ranked foe this season.

“I think we learned coming off the South Carolina loss and I think we’re going to learn coming off this loss as well,” Mikesell said. “It’s not necessarily the loss that matters, it’s how you bounce back from it.”