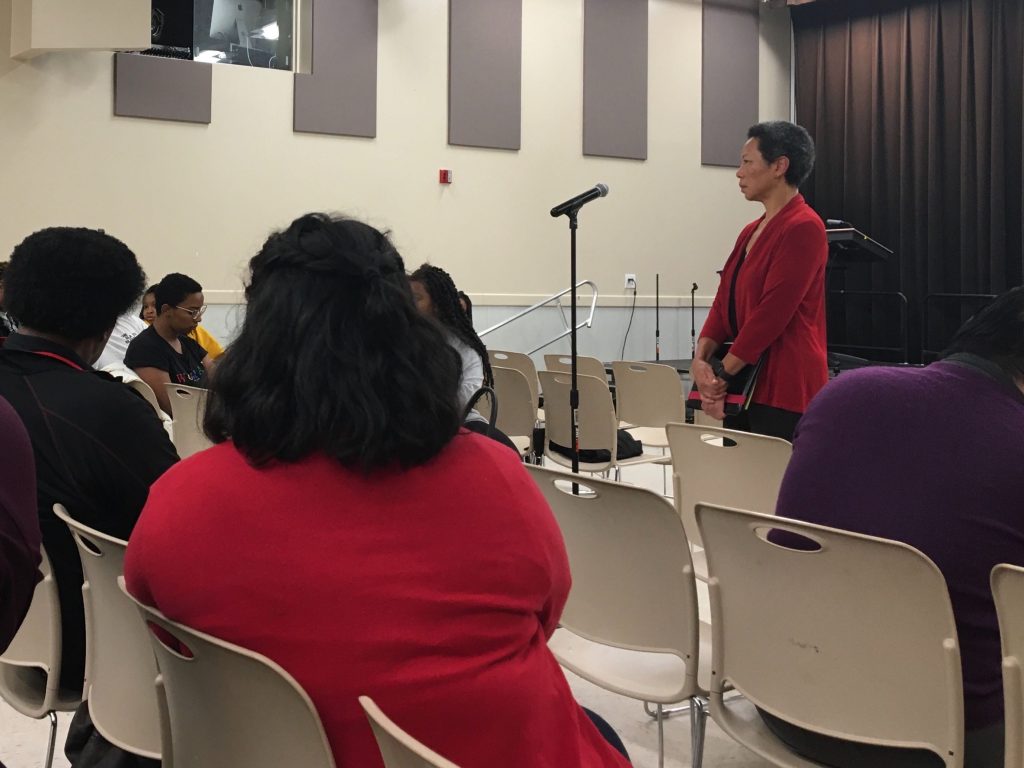 The University of Maryland's diversity and inclusion vice president, Georgina Dodge, speaking at an emotional forum addressing race on the campus in the Nyumburu Cultural Center on Dec. 6, 2019. (Jillian Atelsek/For The Diamondback)

Though her voice was beginning to shake and her eyes were welling up, Hope Hynson kept the microphone held steady to her lips.

Staring down the University of Maryland’s new diversity and inclusion vice president, Hynson commanded the attention of a room full of black students attempting to give words to their experience in College Park. She sobbed as she recounted the story of a noose found hanging in a fraternity house three years ago.

“This conversation has literally been had every semester that I’ve been here,” the English doctoral student said through her tears. “You need to do something different.”

At an emotional forum in the Nyumburu Cultural Center on Friday, Georgina Dodge faced harsh criticism from students, faculty, staff and alumni who felt her leadership was threatening the only place they feel at home on a campus long troubled by racism and hate.

Students describe the center, established in 1971, as a safe haven — a place where they can build community with people who look like them and receive support from staff. Its name meaning “freedom house,” the unassuming brick building is widely considered the hub of black life on campus.

Since Dodge — who has been the university’s VPDI since June — first met with Nyumburu’s leadership, the relationship has been “somewhat tumultuous,” director Ronald Zeigler told The Diamondback on Thursday.

Zeigler said Dodge has made changes to the center’s operation that have “debilitated” his ability to lead it. She’s assumed greater control of its budget, declared its programming outdated and taken issue with the way it finances some of the courses taught there, he said. Dodge gave Zeigler the impression that he could either go along with her vision or be forced out, he added.

That friction has built up steadily over the semester, and concerned students organized a town hall for Monday. There, they planned to advocate for Zeigler’s retention and call on Dodge to change her approach to the center.

But Thursday night, the Office of Diversity and Inclusion announced Dodge would come to Nyumburu and answer student’s questions the next morning. The last-minute event displaced Jumu’ah — weekly prayers held by the Muslim Student Association at the center — a fact many attendees pointed out.

The beginning of the event saw tense back-and-forth between Dodge and Nyumburu’s leaders. Dodge acknowledged that she had problems with the way the center was being run.

“You do not want to change anything,” Dodge told Zeigler. “Without change, we cannot have growth.”

Dodge said the updates she wanted to make to Nyumburu were an effort to bring it into accordance with university policy and help it run more efficiently. Her vision, she said, was to make it the campus’ “center for black intellectual life.”

Nyumburu hosts student meetings almost daily, but it also serves as a more casual gathering place. It’s home to pool tables, study rooms and televisions, and many black students — like Kala Mitchell — say they find themselves there five days a week. For Mitchell, the fact that she’d never seen Dodge at the center meant she didn’t trust her to make changes to it.

“You can’t go into a space and say, ‘This is what you need, this is what needs to happen,’” she told The Diamondback. “You’ve never asked us how you can be a better advocate for us. You’ve never had that conversation with us.”

Soon after, Zeigler asked Dodge why she’d only been to one of Nyumburu’s events all semester. He’d invited her to others, he said — specifically referencing the center’s recent Kwanzaa celebration.

Dodge said she was sure the invitation was “in a pile somewhere,” drawing derisive laughter from the crowd. She later apologized for that remark.

Still, for nearly two and a half hours, frustrated community members let Dodge hear them — expressing anger not just about Nyumburu’s situation, but about the disconnect they feel from the administration. At one point, a student asked Dodge how she planned to be an ally to them. Dodge responded by asking what the community needed from her — drawing more criticism.

“I know not everyone has the same experience in this world, but you’re a woman of color. You should understand,” one student said. “You should have a baseline of knowing how we feel.”

“It’s not that difficult to come and talk to us,” another said.

Attendees, at times, were brutally honest about their feelings toward the vice president. They said they didn’t trust her, and one student told her she didn’t seem suited to the role. Others said her body language and facial expressions made her appear apathetic.

After nearly an hour of nonstop commentary, Dodge took the microphone and began to respond.

“But are you listening?” one student shot back.

Though Dodge told The Diamondback she thought the discussion was “incredibly productive,” she acknowledged that it was painful, too.

“It hurts. It hurts a lot,” she said, her eyes filling with tears.

In a statement, a university spokesperson wrote that Dodge has “worked to collaborate across many cultural and minority-serving offices” during her six months at the university.

“Her swift reaction to unfounded rumors about a new mission for Nyumburu – and quickly offering to meet students where they are – demonstrates transparency, accessibility and leadership,” the statement read.

Dozens of students, though, left the forum still feeling unsure about Dodge and anxiously protective of a center that’s defined their experience on the campus.

One of those was Stefan Clarke, who remembered falling into a depression when he transferred to this university.

When he was a student at Morgan State University, he had no trouble forming a group of black friends. But in College Park, he saw almost exclusively white faces. He felt like he was on an island until he found Nyumburu.

He’d passed by the center dozens of times without realizing what it was, he said. The junior physics major fondly remembers being taught to play spades on the first day he entered, after a classmate had invited him to go.

In the year since, Clarke said, it’s become his “ground zero” — and he doesn’t want Dodge or the administration to compromise that.

“She has a lot left to do to win over our trust,” he said.