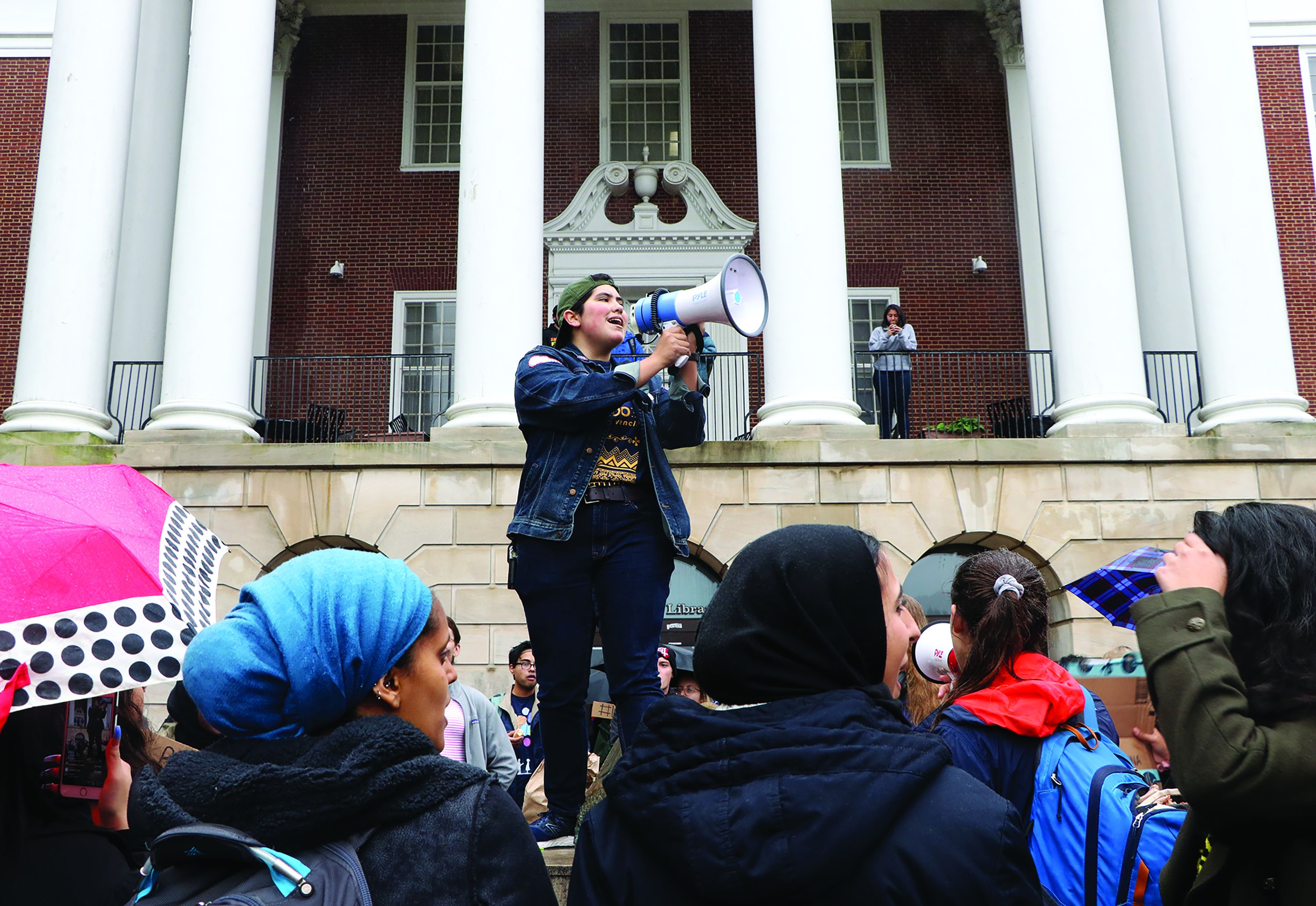 At the "Fire the Liars" rally in the wake of the report on the university's football team, students chanted "Release the review." (Julia Nikhinson/The Diamondback)

Activists and officials at the University of Maryland were eagerly awaiting an external review of diversity that they thought would characterize their experiences with bias and bigotry on the campus, but many said the resulting report failed to do so.

Instead, the report largely focused on the functions of the Office of Diversity and Inclusion, confusing and aggravating some who had anticipated its release.

Lydia Woods, a member of the Black Faculty and Staff Association, said reading it felt like “you’re being given lip service or having smoke blown at you.”

“What really needed to happen didn’t happen at all,” said Woods, the industry development specialist at the university’s career center. “It’s so clear and it’s so blatant.”

The review, which was conducted in April and delivered to university President Wallace Loh in June, was posted on the Office of the Provost’s website in late November. It offered few substantive recommendations and on the whole supported measures the university had already taken.

Solomon Comissiong, BFSA president and assistant student involvement director for the Nyumburu Cultural Center, said he was largely underwhelmed by it.

Comissiong was interviewed by the report’s authors and had led the calls for its release. He said he and other campus leaders “let loose” during their conversations with the task force, detailing stories of microaggressions and discomfort they’ve faced on the campus for years.

When Comissiong read the final draft, he was shocked to see it didn’t include their experiences.

“You think they would have participated in that interview process if they knew it was gonna go for naught? If they knew their sentiments were never gonna make it into the report whatsoever?” he said. “Hell no. There’s no way.”

While an appendix to the 37-page report detailed the wide array of campus leaders who the authors spoke to, the body of the review contained hardly any individual quotes, perspectives or anecdotes. Comissiong said BFSA is planning to compile its own report to address the shortcomings it saw.

The report was commissioned in the wake of the fatal stabbing of 2nd Lt. Richard Collins, a black Bowie State University student, on this university’s campus in May 2017. Sean Urbanski, a white former student at this university who was a member of an online white supremacist group, is charged with murder and a hate crime in the killing.

Trey Huff, president of the university’s National Pan-Hellenic Council, agreed that the report failed to acknowledge the experiences of minorities on the campus.

“It seems like a lot of our time and efforts were wasted,” he said. “There was a lot of student experience that was left out of it.”

In response to student concerns about their perspectives not being heavily included in the report, Loh said people taking issue with what’s emphasized in such documents is “the nature of program reviews.”

He added that the report was supposed to focus on the Office of Diversity and Inclusion, and not diversity across campus.

“The program review is supposed to be about the program — how that unit is functioning, not about issues about diversity on campus,” Loh said. “Now, that’s an important issue, but that is not the charge of that review.”

Luke Jensen, who worked closely with former chief diversity officer Roger Worthington during his time at ODI and serves as the director of the LGBT Equity Center, said the Provost’s Office assumed control of the review and wrote new questions for the authors shortly before their visit. Initially, the report “was to be an assessment of the campus, not an assessment of ODI,” he said.

“There was a lot of confusion,” he said. “The idea was Roger’s. The reality is, it got switched.”

The evaluation was intended to focus on the structure, organization and effectiveness of diversity issues across the campus, according to the charge letter for the reviewers, which was obtained by The Diamondback from a source familiar with the matter.

“The focus of the evaluation will not be on individual units or programs at UMD, nor will the review focus narrowly on the work of the Office of Diversity and Inclusion,” the letter read. “Instead, it will focus on the broader integration and coordination of work across multiple units and programs to provide the greatest impact on the campus as a whole.”

At a BFSA meeting in August, Worthington criticized university leadership as attendees called for the review’s release.

Worthington expressed frustration with the university’s Office of Strategic Communications. He said the office frequently told him, “Here is what you can say and here is what you can’t say as an administrator.”

At a campus rally on Nov. 5, chants of “release the review” echoed across McKeldin Mall as a coalition of 24 student groups gathered on the steps of the Main Administration Building to protest what they viewed as a broad failure of the administration to address the needs of marginalized groups on the campus.

Candela Cerpa, external affairs vice president for Political Latinxs United for Movement and Action in Society — one of the groups that pushed the administration to release the review — said in September that the report was a subject of worry for minority students.

“The general feeling on campus is that we don’t feel safe,” she said. “The fact that the administration is being completely quiet and not transparent at all is very concerning.”

In Comissiong’s view, the experiences of people like Cerpa should have been the focus of the report.

“It is an institutional injustice on this campus,” he said.