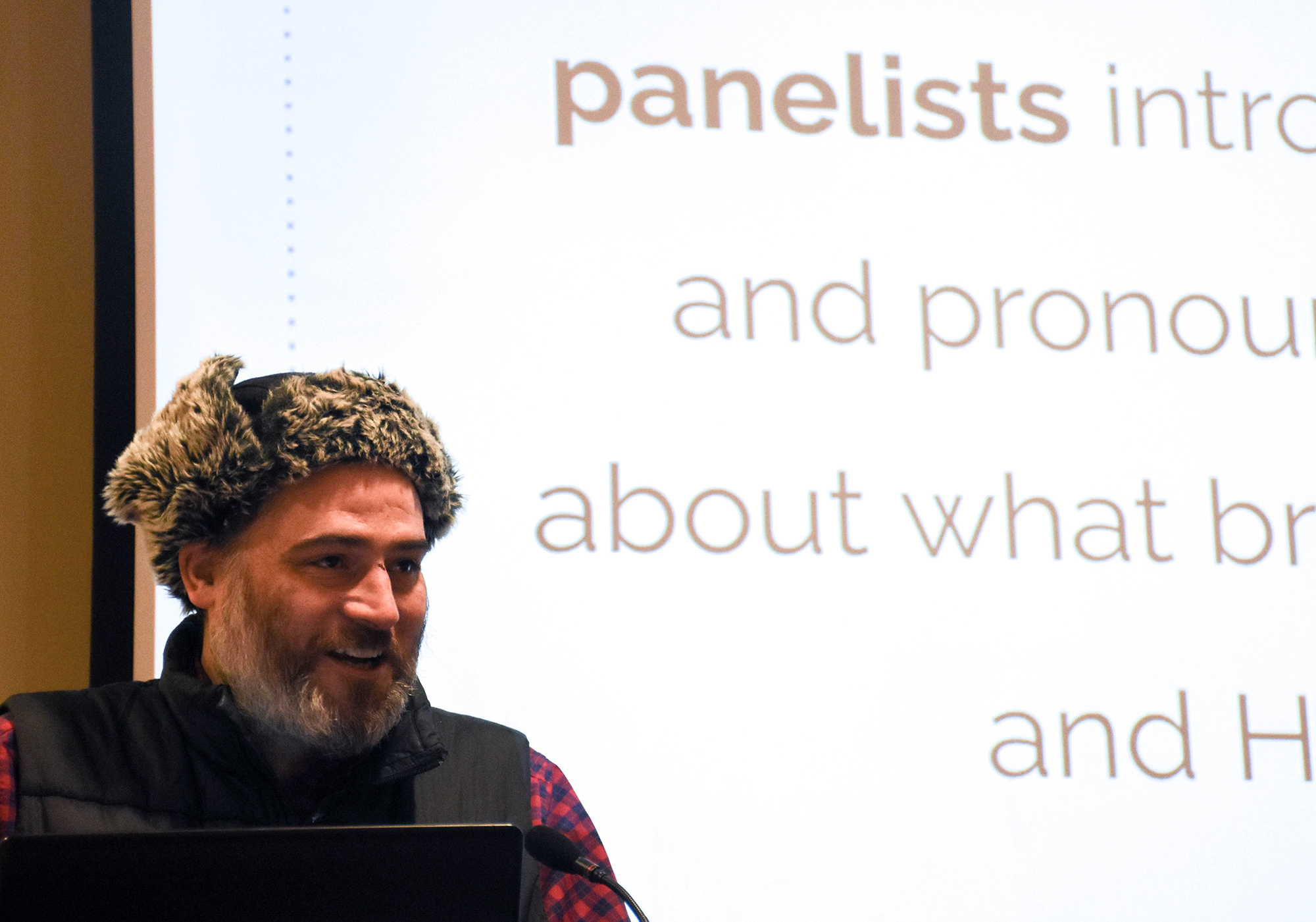 Michael Key, the photo editor of the Washington Blade, addresses students in the Stamp Student Union during a MICA-hosted panel on HIV and issues affecting the LGBT community in Washington, D.C. on Dec. 5, 2019. (John Bedard/For The Diamondback)

By John Bedard
For The Diamondback

When Michael Key came out in 1994, as a junior in high school, there was a certain fear surrounding homosexuality; being gay was thought of as death, Key said.

“That was a game changer,” he said. “People who were dying were able to live lives.”

Key was one of about a dozen people who came to a panel discussion about HIV, which disproportionately affects this country’s LGBT community, at the University of Maryland’s Stamp Student Union. This university’s Office of Multicultural Involvement and Community Advocacy hosted the event.

Kaniya Walker, a sexual health advocate from Heart to Hand, a community health organization based in Largo, Maryland, was one of the speakers. She said her company takes a holistic approach to supporting HIV-positive people.

“We like people to know that living with HIV doesn’t mean dying with AIDS,” she said.

Human immunodeficiency virus, or HIV, is a condition that weakens the body’s immune system. Though the virus is a lifelong condition, and many otherwise healthy people are carriers, it must be treated before it completely depletes the body’s infection-fighting cells. If left unchecked, HIV may develop into acquired immunodeficiency syndrome, or AIDS.

This issue hits close to home for many locals. According to the most recent data from the Washington D.C. Department of Health, 360 residents were diagnosed with HIV in 2018. HIV-positive residents accounted for 1.8 percent of the district’s population last year, too, with more than half of that group over 50 years of age.

Walker also noted other groups disproportionately affected by the crisis.

“The trans community, as a whole, is generally … not part of the conversation,” she said. “Black gay men, white gay men and trans people are really not even included in the conversation.”

Parisa Rahbar, a sexual health peer educator with the health center, came as an audience member and thought the panel was “great.”

“I think there needs to be more events like this,” said Rahbar, a junior community health major. “What [the panelists] were getting at is that education is key, and education is power.”

Lou Chibbaro, a reporter for the Washington Blade — an LGBT newspaper based in Washington, D.C. — also spoke at the event, saying the nation’s HIV epidemic is one of the most important topics he’s covered in his career.

“It’s both sad and dismaying, as well as encouraging,” he said. “I have had the chance to see the changes for the better that have happened in more recent years, in this particular epidemic, where the science has prevented it from being a certain death sentence.”

Jenna Beckwith, a sexual health coordinator at the University Health Center — who moderated the event — asked Chibbaro about the early years of the epidemic, which he said was thought of as a “gay plague.” People were disowned by their families and shunned by their friends, he said, and the community was “flying blind.” This was a jolting reality to him as he started his career in journalism.

“I had to do something that, when I started in journalism, I didn’t think I would be doing,” he said. “That was writing obituaries.”

The Blade exhibited a series of photos documenting the history of HIV and AIDS in the district alongside the panel’s discussion. It’s a traveling show, sponsored by the AIDS Healthcare Foundation, with plans to go to more local schools this year and tell viewers about the epidemic’s impact on the capital.

For Key, now the Blade’s photo editor, the project is meaningful in more ways than one.

Key views himself as part of the nation’s first generation of openly gay kids — the stigma surrounding homosexuality has since changed, he said, but a lot of young people today don’t know about the history of the HIV epidemic. That’s the beauty of the Blade’s photo collection, he said.

“I’ve curated these types of things before, but this is the first time that we’re trying to bring a photo project to students,” he said. “So many have no concept … of what it was like, truly, to live in a time when this was a death sentence.”