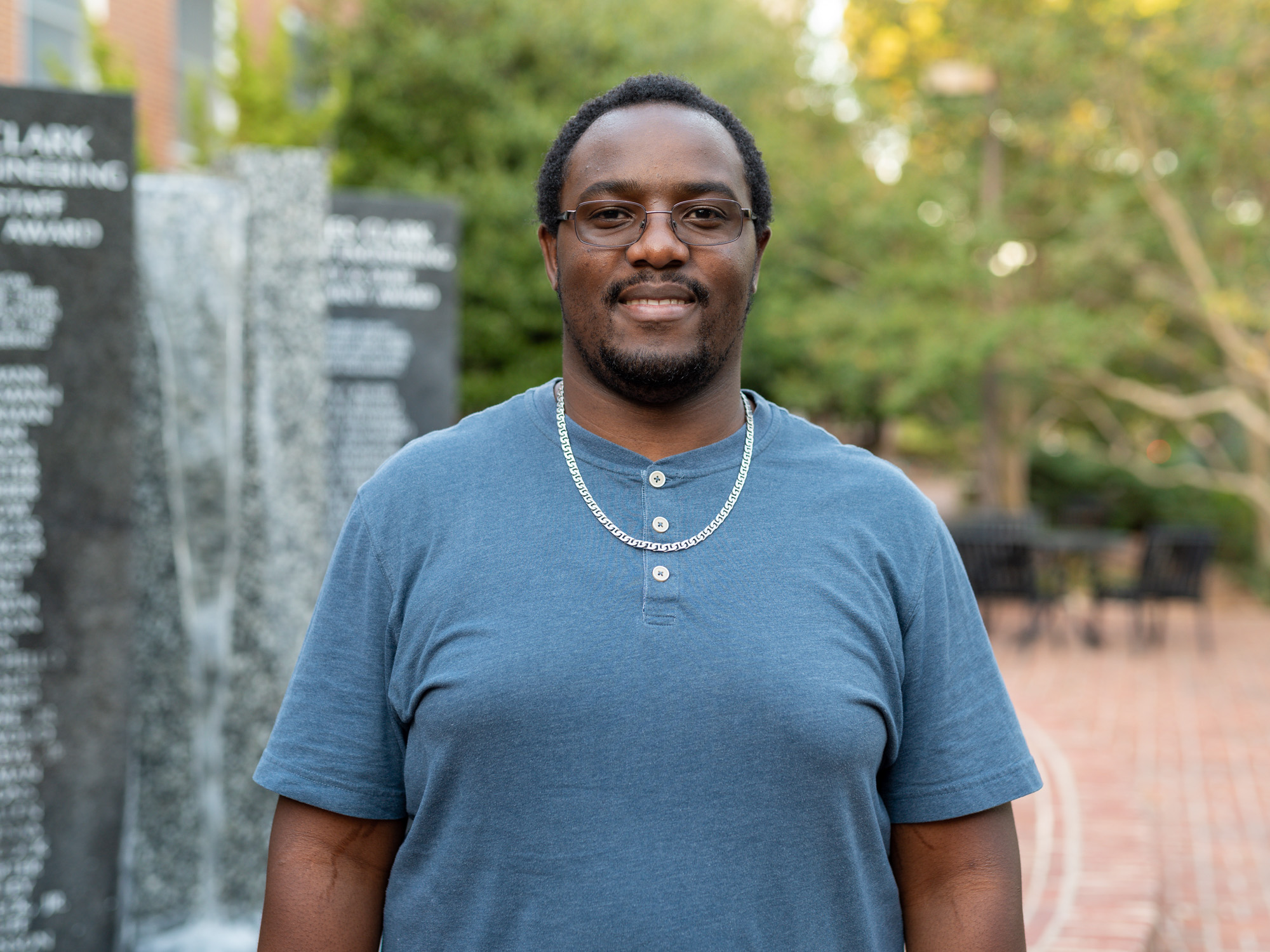 Ray-Shimry Garatsa used to fly kites with his friends at their grade school in Zimbabwe. They would build their contraptions out of plastic bread bags, old clothes and dried grass, competing to see who could fly them the highest.

All the while, Garatsa wondered what forces were at work that made one kite fly higher than the rest. If he understood that, he thought, he could design an even better kite.

That curiosity lit a fire in Garatsa, and set him on a path that led him to the University of Maryland. And, in time — despite battling his fair share of doubt — it brought him to the university’s aerospace graduate program, working toward a degree he said he couldn’t pursue in his native country.

That wouldn’t have been possible, he said, without the McNair Scholars program.

At this university, it provides academic, financial and personal resources for undergraduates who want to pursue a doctorate. It offers fee waivers for graduate school applications, pairs students with faculty mentors and organizes events for them to connect with other academics.

For its students in College Park, though, the program is about more than conferences and advisers and networking opportunities, Garatsa said.

It’s about the moral support that many of them need to make the far-off, uncertain concept of obtaining a doctorate a reality, he said — and it’s a community that stands ready to back them when they feel like they’re going it alone.

“Most of all,” said Taiwo Mustafa, another student in the program, “the thing that I will be grateful for is that environment of camaraderie.”

“I’m getting you there”

Mustafa was born in Ota, an industrial town in Nigeria. There, his family faced discrimination because of their religion. When he was five, they were forced to flee.

Now a senior government and politics major, Mustafa is researching violent discrimination against refugees for his thesis. The project, which was launched through the McNair program, is a “painstaking” statistical analysis, he said, delving into the relationship between ethnic discrimination in host countries and their propensity for violence against refugees.

“McNair Scholars was [a] program that allowed aspiring academics to interact with each other — and not only form a community that understands the unique sort of challenges that we as underrepresented individuals face, but also to inspire us,” he said.

Those unique challenges, Garatsa said, almost kept him out of graduate school entirely. He’d long been determined to get his doctorate degree, but a lack of resources nearly stopped him in his tracks.

Garatsa was nervous and unsure about applying to graduate school. He didn’t have friends or family to ask about their experiences in his field, and he didn’t know what graduate research would be like. Questions in undergraduate math classes have defined solutions, he said. That’s not so with research. The prospect was like a Pandora’s box of unanswered questions that Garatsa was afraid to open.

“Sometimes, because you don’t have anyone who is going through that path, you feel like it’s not for you — it’s not meant for you,” he said.

“Once I have you under my wings, you’re trapped,” she said, breaking into a wide smile. “I’m getting you there.”

For her, the McNair program is about “planting seeds” — meeting with students early on to talk about “this thing called a Ph.D.”

The nationwide McNair program is named in honor of Ronald Erwin McNair, an astronaut and MIT graduate with a doctorate in physics who died in the 1986 Challenger explosion. He was the second black person to go to space.

Roper Nedd, a graduate of this university who was born in Trinidad and Tobago, said she wished she had a program like McNair during her time here — when very few faculty members looked like her or came from similar backgrounds.

“I see myself in these students,” she said.

The program’s broad-spectrum mentoring is arguably its most important offering, Roper Nedd said. This includes not just academic mentors who can aid students applying to graduate school, but also “personal mentors” who are invested in students’ well-being.

With the encouragement of his mentor, Mustafa is applying to his “top choice” graduate school: Stanford University.

After joining it, the McNair program’s community of support became something Mustafa treasured. As a black, working-class person, he said he often doesn’t feel well-represented on campus, calling it an “alienating” experience. But with his McNair peers, things are different.

He sees the McNair program’s goal of increasing representation as an important contribution to his field. As it is, political science is “intellectually impoverished” from its lack of inclusivity, he said, and it’s crucial, he said, to uplift perspectives from marginalized groups.

Applying to Stanford is a move Mustafa said other McNair students sometimes shy away from because they don’t feel “capable” of succeeding at a prestigious school, he said.

But he doesn’t let himself fall into that way of thinking.

“One has to really interrogate what [capable] means,” he said. “You are a human capable of learning and advancing knowledge — you got here, you got into this program. So that’s telling something about your academic capacity.”

At the research initiative, Garatsa used his childhood interest in what makes things fly to inform his project.

It was a trial by fire, he said. His assignment at the initiative was to develop and implement a collision avoidance mechanism for drones. He had a limited amount of time and no prior knowledge. He dove straight into the work. He poured over textbooks and academic literature, scouring everything he could find.

Garatsa’s solution was to use lidar — a surveying method that uses light to create three dimensional maps — to determine the environment surrounding a drone in real-time. With this information, a drone would then be able to detect an object that came within 20 meters, and automatically maneuver out of the way. Garatsa wrote the code himself.

At the end of the six weeks, Garatsa said, he had produced work he was proud of. Someone in a following McNair cohort was even able to use Garatsa’s research as a starting point for their own.

“It felt awesome,” he said.

When he presented his work that summer, students listened to him, he said, and he could tell their interests were piqued. They wanted to know more. He felt immersed in the research process, confident in his ability to contribute to the field.

And he remembers the way Roper Nedd — the woman who had convinced him he could make it through graduate school — talked about his accomplishments.

“You’re now the expert,” she told him.